Who were the Pre-Raphaelite Brotherhood?

This week we’re celebrating the brilliant artwork of the Pre-Raphaelite Brotherhood. But who were they and what they all about? De Morgan volunteer Sonja tells us all about them in this week’s blog.

The group’s formation and its artistic direction, were encouraged by two factors.  It was a period of great change, one they did not view as overly positive.  Capitalism, industrialisation, rapid urbanisation, and modernisation caused significant social shifts and economic stress.  Secondly, the group’s artistic direction and name were both a renunciation of the practices advocated by the Royal Academy, and its opposition of the Academy’s promotion of Neo-Classicism, in particular the works of the Renaissance master, Raphael (1483-1520).  Additionally, they sought to challenge the commercial dominance of Neo-Classicism.

This meant that the Pre-Raphaelite Brotherhood ‘looked backwards to imagine an alternative future’ (Edwards, 2012), like so many of their contemporaries, such as the art critic, John Ruskin (1819 – 1900), who was inspired by ‘a vision of the fourteenth century’ (Edwards, 2012) and Augustus Pugin (1812 – 1852) an architect and critic, who instigated the Gothic revival in architecture.  Their belief was that this simpler world was a superior one, and their anti-establishment ideology resulted in medieval revivalism.  The Pre-Raphaelite Brotherhood’s works were religious, literary or of a moralizing nature. 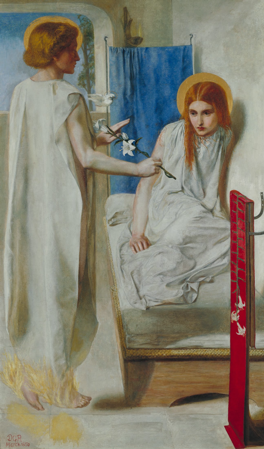 The Pre-Raphaelite Brotherhood’s religious art was inspired by ‘Early Christian’ art of the fourteenth century, prior to the work of Raphael, as seen in Dante Gabriel Rossetti’s Ecce Ancilla Domini! (The Annunciation), (1849 – 50), oil on canvas, Tate, London.

This artwork depicts the angel Gabriel’s announcement to the Virgin Mary of her miraculous pregnancy.  The Annunciation has frequently been depicted in art.  Although Rossetti’s depiction stays true in his use of symbolism, for example the Virgin, the lilies, a symbol of Virginity and purity, and the dove of the Holy Spirit, there is a pictorial ambiguity to his scene.  Rossetti employs an arcane aesthetic, most obvious in his portrayal of Mary, who looks fragile, as if she has just woken from sleep.  Her expression does not resemble the typically pious one would expect in this scene, whereas she looks scared with an unusual posture.  Moreover, this painting reflects Rossetti’s disenchantment with academic painting through its uncomplicated depictions, relatively flat surface and lack of shading, in variance with the academic convention.  Rossetti uses a simplicity of line and mimesis, which is in stark contrast to the artificial historical paintings of the Royal Academy.  Another unusual aspect to this painting is Rossetti’s inclusion of Chinoiserie in the bottom right hand corner, suggesting he was possibly influenced by the Great Exhibition of 1851 in London which exhibited arts and crafts from around the world.

The Pre-Raphaelite Brotherhood typically portrayed literary subjects, particularly those dealing with love and death from unclassical authors.  One such example, is John Everett Millais’s Ophelia, (1851-52), oil on canvas, Tate, London.  The character Ophelia is from Shakespeare’s Hamlet and Millais depicts the scene where Ophelia drowns following her father’s murder by her lover.

The Pre-Raphaelite Brotherhood also explored contemporary issues, such as poverty and prostitution, which enabled a moralizing nature.  One such example is William Holman Hunt’s The Awakening Conscience, 1853, oil on canvas, Tate, London. 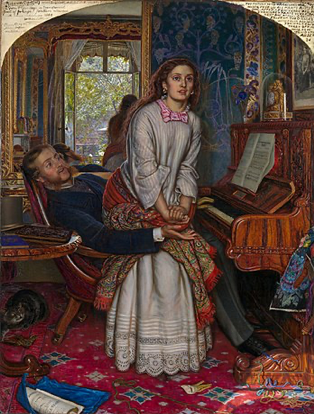 Hunt has portrayed a woman, who is possibly rising from a wealthy gentleman’s lap.  Her hands are adorned with rings on all but her wedding finger, which suggests she is his mistress.  Hunt indicates that she is trying to escape her predicament and is trapped by circumstance using symbolism, such as the bird trying to escape from the cat, and a female figure enclosed in a glass dome.  There is a sense of hope, enlightenment and salvation with the light from the garden.