‘He looks like what he is, a Yorkshire squire,’ wrote Lady Paget, his neighbour in Florence, towards the end of his life, ‘though his pictures are of the severest Pre-Raphaelite type.’[i] But who was John Roddam Spencer Stanhope?

He was born at Cannon Hall, outside the village of Cawthorne in the West Riding of Yorkshire, on 20 January 1829, the second son of John Spencer Stanhope and Lady Elizabeth Coke. His grandfather was ‘Coke of Norfolk’, the fabulously wealthy agricultural reformer and Earl of Leicester whose country seat, Holkham Hall, still boasts a spectacular art collection. His eldest sister, Anna Maria, was the mother of Evelyn De Morgan. His aunts, Lady Andover and Lady Anson, were gifted amateur artists who had had lessons from Thomas Gainsborough.

He was educated at Rugby and Christ Church, Oxford, and there is evidence that during the long gap between his leaving school and going up to university in 1848 he may have been in Florence. ‘My pictures look very well,’ he wrote home from Oxford after he had settled in, ‘and my rooms are considered the most brilliant in College.’[ii] Perhaps he had brought some of the early Renaissance paintings, which he was to love all his life, back from Italy?

His Christ Church contemporary Richard St John Tyrwhitt included a thinly veiled portrait of him as the artist ‘Charley Cawthorne’ in Our Sketching Club. Charley’s friends at University regard him as: ‘the right sort of fellow that one could trust anywhere; a regular bird, in fact, only given over to drawing and that sort of bosh.’[iii] He came down from the university in 1851 with a letter of introduction from Ruskin’s friend Henry Acland to the painter George Frederic Watts that recommended him as an ‘aspirant amateur draftsman.’[iv]

No work definitely from his hand survives from the years he spent working alongside Watts. We know that he assisted him with several mural projects, including Justice: A Hemicycle of Lawgivers at Lincoln’s Inn, for which his father sat as Solon. Close association with Watts brought him into the circle at Little Holland House, where Watts was living as a guest of the Prinsep family, and it was there, in 1857, that he is first known to have met Dante Gabriel Rossetti, William Holman Hunt and Charles Allston Collins. ‘I submitted my picture to their inspection’ he wrote, ‘and I must confess that their remarks on it were very flattering and that I have evidently taken up quite a position in their eyes.’[v] The painting was probably Robins of Modern Times. Rossetti invited him to join the team of artists decorating the Oxford Union with scenes from the Morte d’Arthur.

Participation in that project placed him at the heart of the ‘second generation’ of Pre-Raphaelites alongside Edward Burne-Jones and William Morris, who became his friends. Tyrwhitt helped Morris paint the ceiling, and married Stanhope’s sister Eliza in 1858. She died the following year, leaving him with a baby son to care for. After work on the murals was complete Stanhope took a studio in the building overlooking the Thames where Rossetti lived in Blackfriars. There he painted Thoughts of the Past, a companion piece to Robins of Modern Times, which he showed at the Royal Academy and which remains his best-known work. He did all the things that young artists in London did: he was a founder-member of the Hogarth Club, joined the Artists’ Rifles, and took boxing lessons from Alec Reid.

In 1859 he married Elizabeth ‘Lilla’ Dawson, née Wyndham-King, the grand-daughter of Turner’s patron the Earl of Egremont and the widow of an officer killed in the Crimea. Their only child, Mary, was born that November but died of scarlet fever in 1867. She is buried next to Elizabeth Barrett Browning in the English Cemetery at Florence. He commissioned a house, ‘Sandroyd’ at Cobham, from Philip Webb, the architect of William Morris’s ‘Red House’, but only lived there for four years. He was a chronic asthmatic, and the Thames valley location proved bad for his chest. All his homes after that were on hilltop sites: Little Campden House, in Kensington; Hill House in Cawthorne; and finally Villa Nuti on Bellosguardo, outside Florence, which he bought in 1873.

During the 1860s he exhibited widely: at the Royal Academy; at the Liverpool Academy and the Royal Manchester Institution; and at the Dudley Gallery in the Egyptian Hall in Piccadilly, where he showed alongside the younger avant-garde artists loosely associated as the ‘Poetry without Grammar’ school. One of them, Simeon Solomon, was a close enough friend to come and stay with him at Hill House. Stanhope was one of the artists invited by Sir Coutts and Lady Blanche Lindsay to show at the opening of the Grosvenor Gallery, the event that propelled his friends Watts and Burne-Jones to superstar status. He had no such luck. He showed some of his best work at the Grosvenor – including Love and the Maiden in 1877, The Waters of Lethe in 1880 and Patience on a Monument in 1884 – to only lukewarm response. 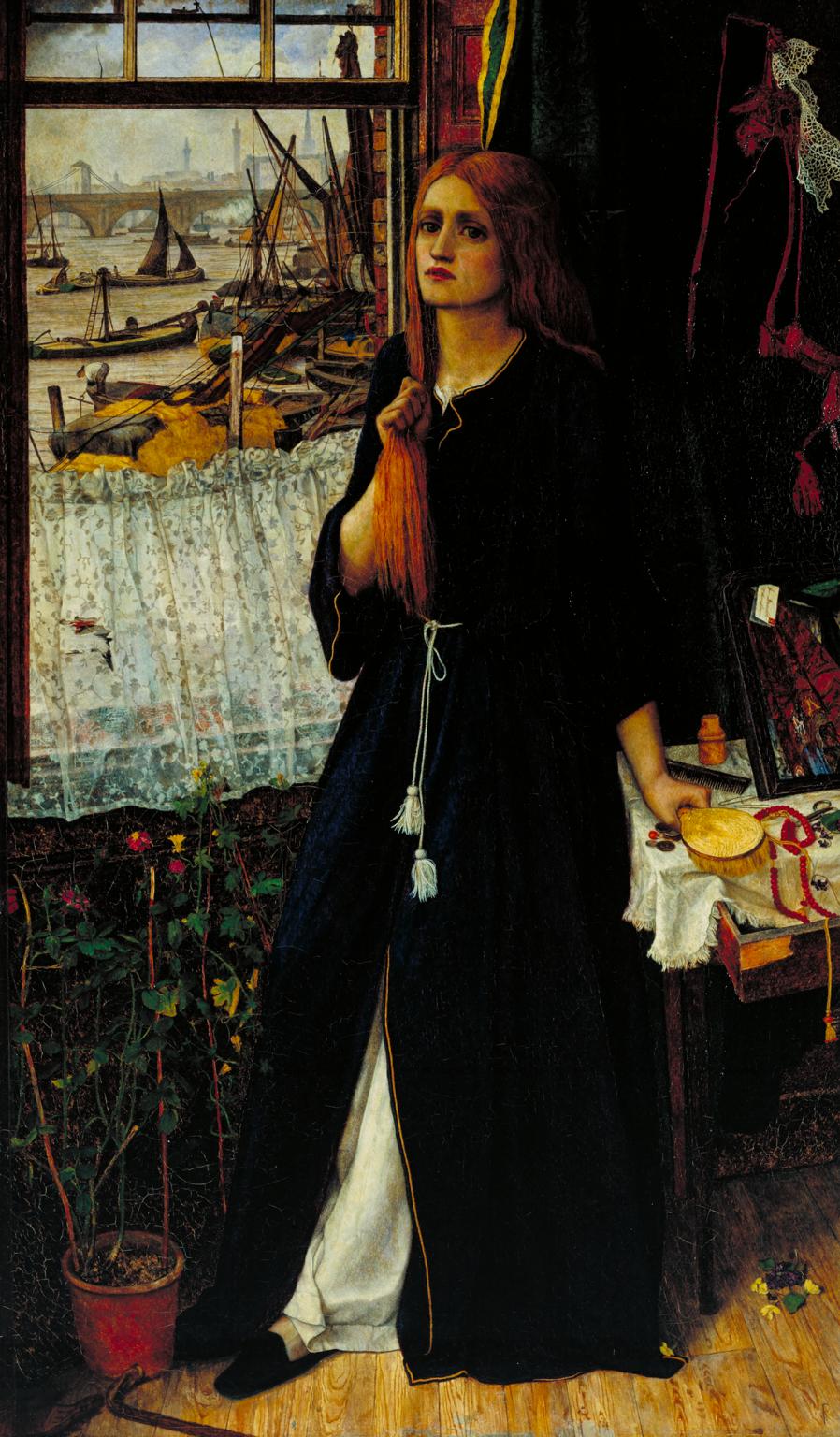 Thoughts of the Past (c.1860) by John Roddam Spencer Stanhope © Tate

He was really an artist and he wanted to be praised and encouraged, and wasn’t so; it was all uphill to him

This must have influenced his decision to emigrate permanently in 1880.

A lot of his work was for churches. In Yorkshire, he painted a mural (recently restored) over the east window in St John the Evangelist, Hoylandswaine, which the Stanhope family built in memory of his youngest sister Louisa, who died in 1867. He met the architect George Frederick Bodley at the Hogarth Club and the two men were friends as well as professional associates throughout their long lives. Stanhope painted four musician angels on the organ case at Bodley’s St Martin-on-the-Hill, Scarborough, and Bodley was the first owner of The Water Gate, which Stanhope showed at the Dudley Gallery in 1870. They worked together at Holy Trinity, the Anglican church in Florence, during the 1890s.

But the result of their most important collaboration was the chapel at Marlborough College, for which Stanhope painted a suite of twelve large paintings, The Ministration of Angels on Earth between 1875 and ’79. After his death at Villa Nuti in 1908, his obituary in The Times called this ‘the work by which he is likely to be best known in England.’[vi] Perhaps the inaccessibility of this major work, together with his absence from London during the last twenty-eight years of his life, accounts for his relative obscurity. Though, as Burne-Jones said, ‘there may be a time for him yet.’[vii]

This page has been generously researched and written by art critic and historian, Simon Poë.