Volunteering with De Morgan: A Trip to Simon Gillespie’s Studio 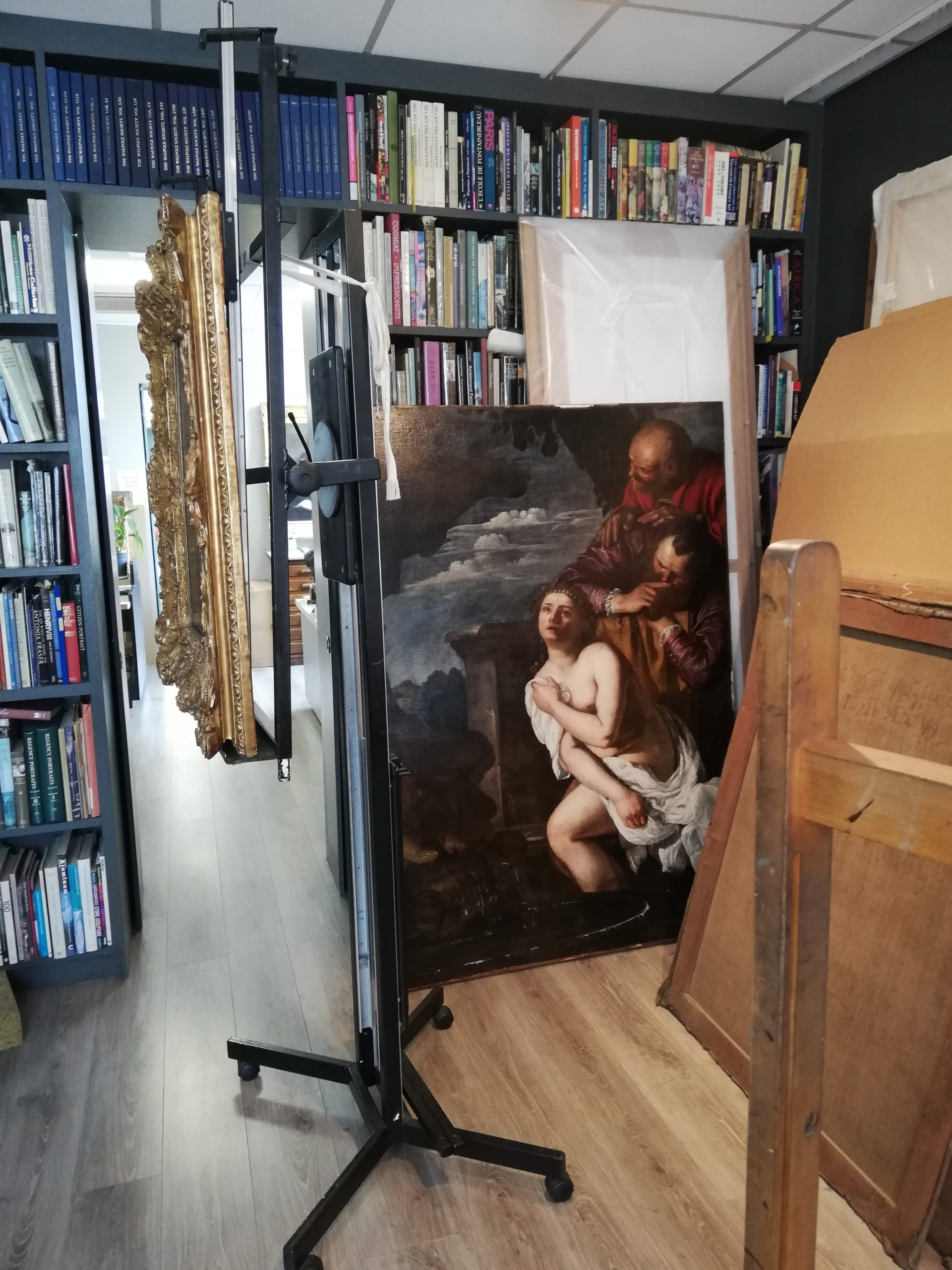 A gap year followed by the coronavirus pandemic had delayed me starting my Bioarchaeology degree so I have spent the last year volunteering for the National Trust as an assistant conservator and art gallery guide at Wightwick Manor in Wolverhampton.

The manor is a Victorian home built in the arts and crafts style containing numerous Pre-Raphaelite works. In 2016 a specialist art gallery was opened, housing a remarkable collection of paintings and ceramics created by Evelyn and William De Morgan around the end of the 19th Century.

While showing visitors around the gallery recently, I ran into Sarah Hardy, the De Morgan Foundation Curator-Manager, who invited me to accompany her on a visit to world-renowned Art Conservator Simon Gillespie. She had arranged to meet him at his Bond Street studio to discuss whether he would be interested in analysing some of the De Morgan Foundation’s paintings.

Naturally I jumped at the chance to meet the man I had seen so many times on programmes such as Fake or Fortune and Britain’s Lost Masterpieces, analysing and restoring some of the art world’s most important paintings!

In Mayfair, Simon invited us into his office and offered us a cup of tea. It’s quite hard to really concentrate on anything when you’re suddenly in a room surrounded by Cezannes and Gentileschis, Tudor portraits and other ancient-looking artworks – some in their frames, some out, some arranged upon tables or stacked neatly against the walls.

Simon chatted about Evelyn De Morgan and seemed surprised that none of the paintings in the collection had ever been restored or analysed. He told us he would be delighted to take a closer look at one or two in the future to reveal some of their lost secrets.

He led us through into the studio, which, like his office, was teeming with beautiful works of art. As we walked past a purported Rembrandt and a 19th Century Newlyn School canvas on our behind-the-scenes tour, Simon explained about the work of his team of artists and conservators who specialise in restoring, conserving and authenticating works of art, from 17th Century Old Masters to contemporary modern sculptures. The highly qualified studio team are considered to be some of the leading art conservators in the world and it was fascinating to watch them at work. Some conservators were seated on stools while others perched on scaffolding to restore life to damaged and time-worn canvases. Their tasks include specialist cleaning, removing smoke-stained varnish and clumsy overpaint, retouching areas of missing paint and even repairing major structural damage. Conservators work alongside specialist scientists who analyse paint and canvases to see whether artworks might be undiscovered masterpieces or convincing forgeries.

At the far end of the studio loomed an enormous painting, which would have filled an entire side of my living room, with rows of eastern princes, lined up as if in a football team photo. A number of  student apprentices scurried around the foot of the painting and leaned over from scissor lifts to reach different parts of the enormous painting, dabbing varnish off here, re-touching a sliver of paint there, carefully attempting to restore the original glory to this elegant memorial to a long-lost Persian king’s 24 sons.

Simon with the painting

Simon showed us some other projects, including a 17th century still life whose background had been all but completely lost due to botched historical attempts at conservation, a portrait of a young woman adorned with lace which may have been painted by an Old Master and which may feature in a forthcoming TV programme, and a heavily damaged painting originally thought to have been produced by one of Artemisia Gentileschi’s apprentices but which Simon suspects could be by Artemisia herself because of the highly accomplished fluid and spontaneous under-sketching.

It was a great privilege to have a personalised behind-the-scenes tour at the studio and I benefited from some wonderful expert advice from Simon on how best to pursue a career in art conservation and analysis.

This fantastic opportunity to visit Simon and his studio has reinforced my drive to follow art conservation and authentication as a possible career, and to be able to pass on what I have learned to our visitors at Wightwick Manor… all thanks to the National Trust and the De Morgan Foundation.