Evelyn De Morgan was an artist who painted her dreams. She prayed for peace, studied spiritualism, and fought for feminism with her fabulous paintings.

These pictures are explored in the exhibition ‘Pre-Raphaelite Sisters’ on display at the National Portrait Gallery for one more week, until 26th January 2020.

In this long-overdue exhibition, the contribution of female artists to the visual culture and language of the late-Victorian period is finally celebrated.

Evelyn’s importance to this feminist re-telling of the Pre-Raphaelite Brotherhood is demonstrable by the sheer number of works by her on display in the exhibition. Night and Sleep (1878) was one of the first pictures which Evelyn De Morgan exhibited at the Grosvenor Gallery in London. This radical new art gallery was established as an avant-garde, anti-establishment gallery for painters of the aesthetic movement, Symbolists, realists, and modernists to exhibit at. It attracted a younger generation of artists who opposed the traditional teaching of the Royal Academy, its classicism, and penchant for history and genre paintings. Those most famous for exhibiting at the Grosvenor – then and now – were male artists who captured dreams and rejected tradition in their beautiful, radiant canvases. But women were invited to exhibit at the forward-looking Grosvenor as equals to canons of art such as GF Watts, Edward Burne-Jones and James McNeill Whistler. Evelyn De Morgan was one such artist and Night and Sleep is one such exemplary painting which she exhibited there. 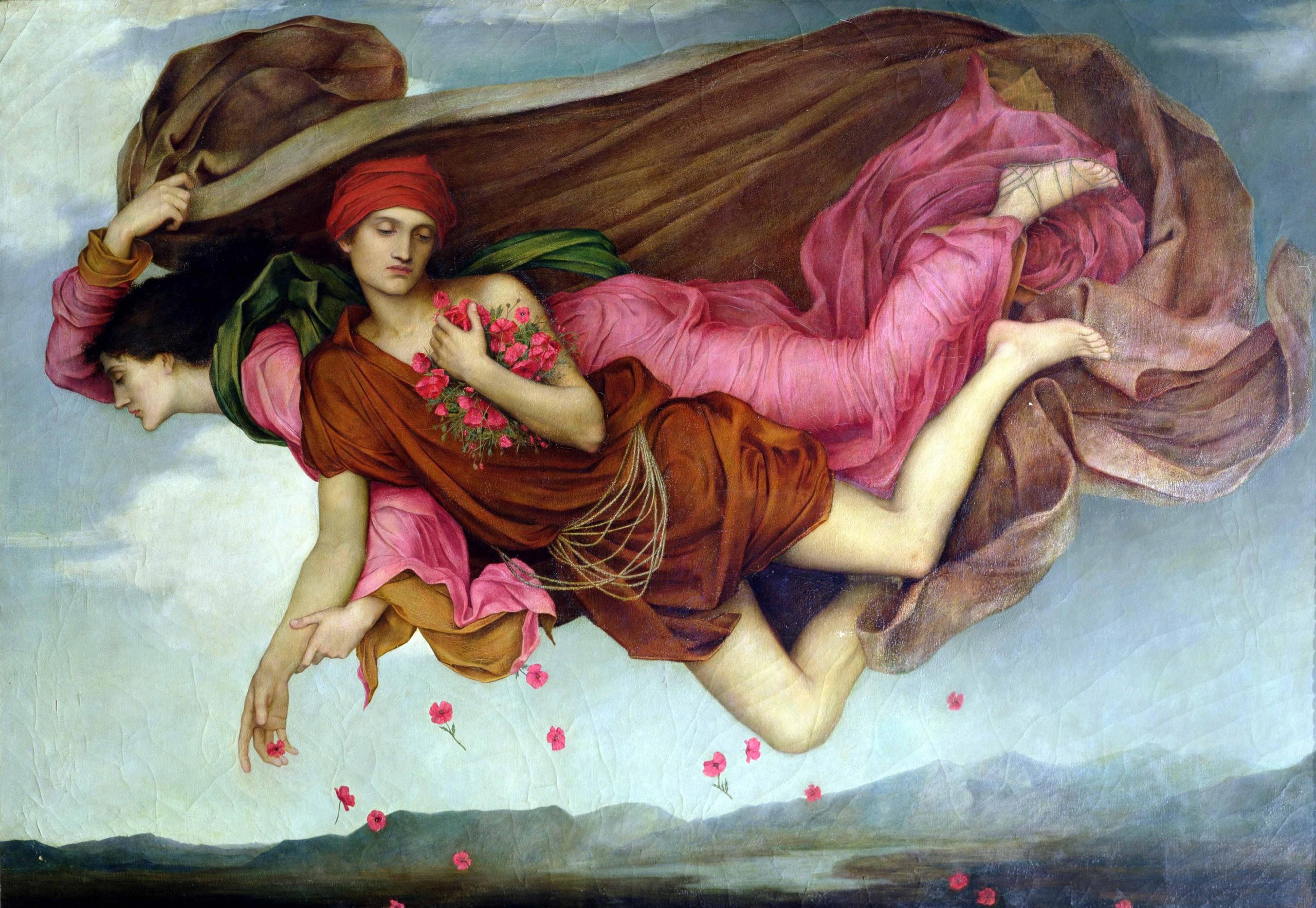 In this canvas, mesmerising in its perfect beauty, the artist strips the fragile human form of any narrative meaning, allowing us to feel the effects of abstract concepts of night and sleep. We experience this picture, rather than see it, much how we experience the transitional periods depicted. It was an instant success at the Grosvenor, but retained by the artist until her death, before passing into the De Morgan Collection. It was obviously a painting which she was proud of and shows off her wonderful skill.

Queen Eleanor and the Fair Rosamund – the medieval legend of Henry II’s mistress locked in a tower at Woodstock in Oxfordshire, hunted by his wife who sought to avenge her – was a subject tackled by many artists in the late 19th Century, particularly Edward Burne-Jones, who painted it three times. Evelyn De Morgan’s take on the subject is a carefully detailed canvas. It calls into question the morals and opposing forces of good and evil, between an adulteress and the woman she has wronged. The inclusion of this picture in the Pre-Raphaelite Sisters exhibition places Evelyn De Morgan at the heart of this late-Victorian movement and forces her to be understood as equal to her male counterparts. 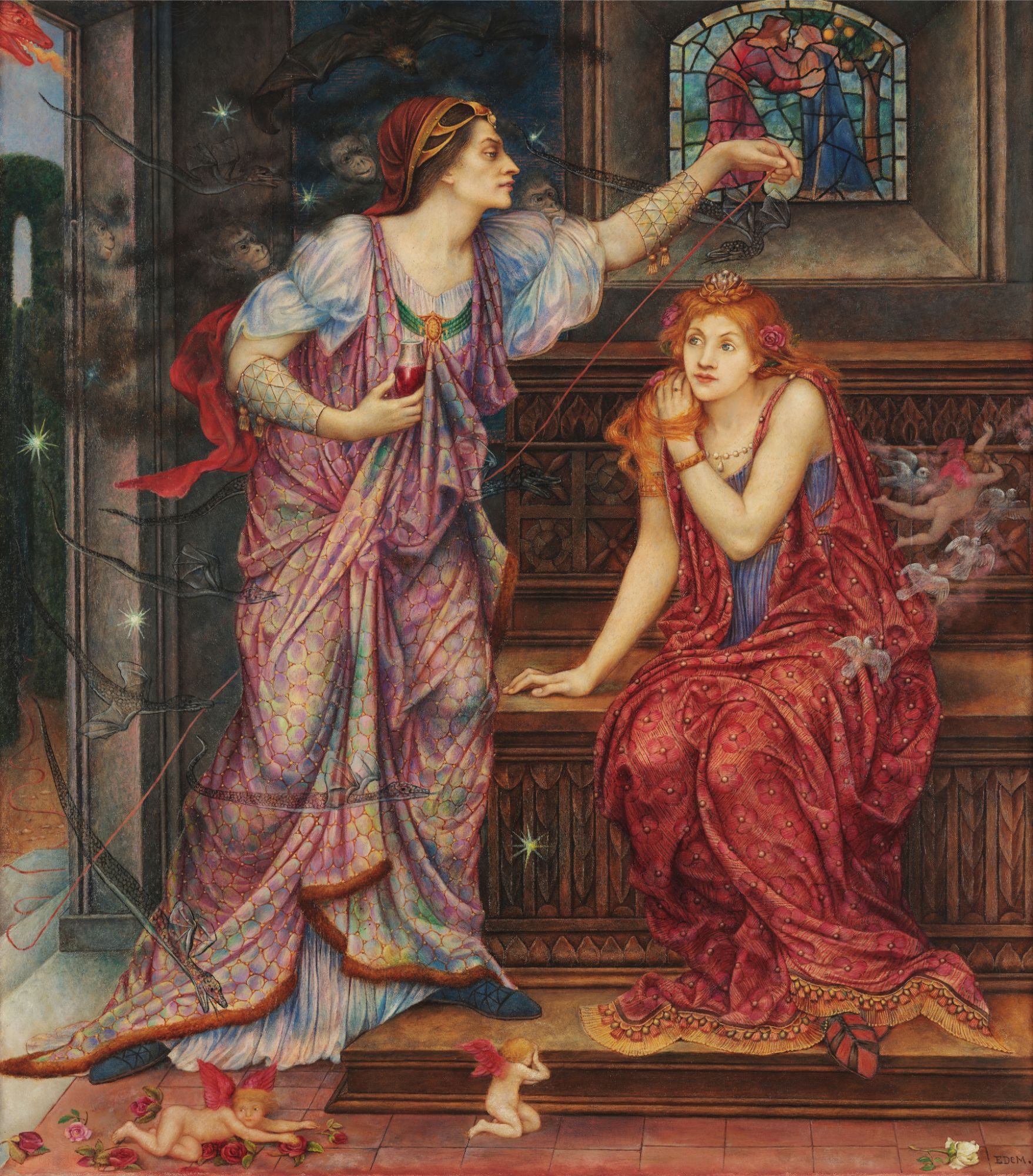 This exhibition is the key Pre-Raphaelite show of our generation, assessing previously ignored artists purely on the merit of their artwork, rather than their gender and is a must see for any Victorian art lover.