Two of Evelyn De Morgan’s paintings were star pieces in the recent Watts Gallery exhibition. Dr Tessa Kilgarriff explains why their inclusion was so important to the show. 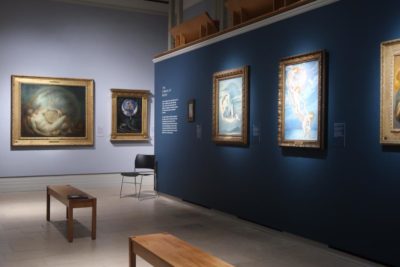 This year marks the 50th anniversary of the first Moon landing and to celebrate Watts Gallery is holding the exhibition Moonscapes. Now entering its final weeks, Moonscapes takes a closer look at how nineteenth-century artists have envisioned the Moon. The show considers the Victorian fascination with the earth’s closest cosmic neighbour, bringing into focus the many ways in which nineteenth-century artists like William Holman Hunt, John Atkinson Grimshaw and Evelyn to Morgan have drawn inspiration from the Moon in all of its forms and phases. The idea for the exhibition was drawn from Watts’s own interest in astronomy and in how art could represent the universe, a challenge that he responded to most fully with his famous work The Sower of the Systems.

Evelyn de Morgan’s repeated engagement with silvery moonlight, Moon goddesses and celestial light made her an ideal artist to include in the show and we were delighted to include both Luna and Moonbeams Dipping into the Sea on loan from the De Morgan Foundation. Luna, the earlier work completed in 1885, shows the goddess draped in diaphanous blue cloth and bound to a crescent with loose, abundant coils of rope. De Morgan’s personification of the Moon represents a transitional state between the earthly and heavenly realms which is perhaps reminiscent of her spiritualist beliefs. De Morgan’s concern with the restriction of women’s rights and in campaigning for women’s suffrage can also be closely associated with her recurrent depiction of instruments of captivity such as cages and ropes.

Dating from 1900, Moonbeams Dipping into the Sea is a light-filled celebration of the relationship with the Moon and water. The three female figures embody the phases of the Moon: waxing, full, waning or birth, life and death. 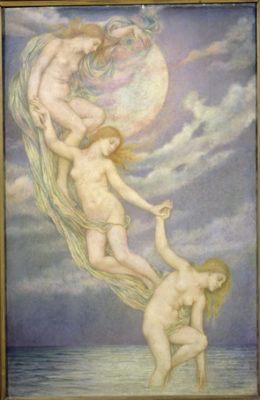