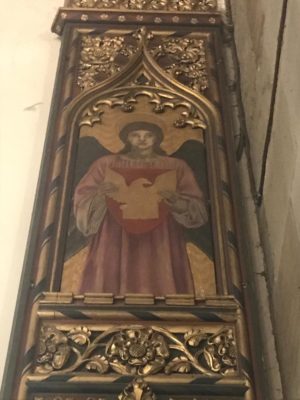 You’d be hard pressed to find a corner of this country with as many Arts and Crafts Movement churches and artwork that so few people are aware of.

Barnsley itself is spoilt with museums and fine art collections across the impressive Cooper Gallery, Wentworth Castle and Experience Barnsley, but for those looking for Arts and Crafts movement gems that are a little off the beaten track it is the villages outside this northern town that are of interest.

Cawthorne, a bustling village with a real sense of community, was once home to John Roddam Spencer Stanhope, a great aesthete of the late-19th century. He lived at Hill House, overlooking the Cawthorne Valley and Cannon Hall. I was lucky enough to be invited by the private owners of Hill House for a tour of Spencer Stanhope’s studio home. Seeing the punched ceiling, bay windows and panelled sitting room first hand gave a real insight into Spencer Stanhope’s working methods.

Cannon Hall was once the home of Roddam’s brother Walter, and it is where he, and Evelyn De Morgan’s brother were raised. Therefore, it is wonderful for the De Morgan Foundation to display its collection of pictures and ceramics by the De Morgan’s at Evelyn’s ancestral home.

Cawthorne Church was completed in the 1880s and largely funded by the Spencer Stanhope family, many of whom are buried in the graveyard there. This church has original organ panels executed in gesso by Evelyn De Morgan (pictured) and stained glass by Spencer Stanhope. It is open on Saturdays and definitely worth this rare Evelyn De Morgan artwork. Evelyn was a pupil of the Slade School of Art, which she attended with Alice Millais, the daughter of Pre-Raphaelite painter, John Everett Millais. Through marriage, she became Alice Stuart Wortley and moved to Wortley Hall, just outside Cawthorne. It was due to Alice’s influence that Wortley Hall now has some incredible Arts and Crafts Movement adornments. There is a William De Morgan fireplace and a relief ceiling designed and installed by Edward Poynter, Alice and Evelyn’s tutor at the Slade School of Art. 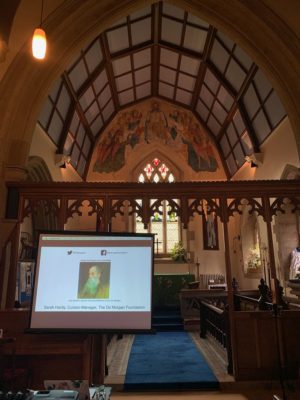 This year is the 150th anniversary of Hoylandswaine Church, which won a funding bid from the HLF (now the National Lottery Heritage Fund) to uncover the Spencer Stanhope Mural in the church which features a choir of angels rising heavenward above a Morris & Co. stained glass window. Other churches in the area, including Flockton and Denby, have original artwork by Roddam Spencer Stanhope and Gertrude Spencer Stanhope, one of Walter’s daughters. This family of artists were central to bringing the style and craft of the day to their villages and it is truly astonishing that it still exists.

The De Morgan Foundation is delighted to be able to show its collection in an area brimming with Arts and Crafts Movement artwork.

With Many thanks to Hoylandswaine Arts Group for inviting me to speak at their anniversary celebrations.