You may already know the history of how the De Morgan Collection came to be, if not you might like a quick trip around the webpage, www.demorgan.org.uk, to find out more. The De Morgan collection comprises of fifty-six framed oil paintings by Evelyn De Morgan, over six hundred drawings, a few watercolours, and unframed works. William’s artwork owned by the foundation includes  works on paper, canvas and over one-thousand ceramics. There is also a small collection of letters, drawings, personal effects and family documents of the De Morgans and Wilhelmina Stirling, including the research for many of her books and a letter from Emmeline Pankhurst.

Evelyn (1855-1919) and William (1839-1917) met at a fancy-dress party, marrying in 1887. Evelyn, born Mary Evelyn Pickering was the elder sister to Wilhelmina Stirling. It was after the couple died that she made it her mission to secure their artworks and reputation, creating a legacy that she left in trust for the public, the De Morgan Foundation was formalised in 1967.

Wilhelmina, christened Anna Maria Diana Wilhelmina Pickering was born 1865 in London to upper middle-class parents. Her father was a barrister, Percival Andre Pickering (1810-1876) and her mother, Anna Maria Wilhelmina Spencer Stanhope (1824-1901), the sister of the renowned artist John Roddam Spencer Stanhope, and a descendant of Coke of Norfolk, an Earl of Leicester. Wilhelmina’s parents married in 1853 and had four children, Mary Evelyn (Evelyn De Morgan), Percival Spencer Umfreville (1858-1920), Rowland Neville Umfreville (1861-1931), and Wilhelmina was the youngest. Her father employed the fifteen-year-old live-in nursery maid Jane Hales, who modelled for Evelyn De Morgan, when Wilhelmina was just a year old. Jane never married and stayed as a companion to Wilhelmina until her death in 1925. The family regarded Jane so highly that she is buried close to Evelyn and William De Morgan at Brookwood cemetery. 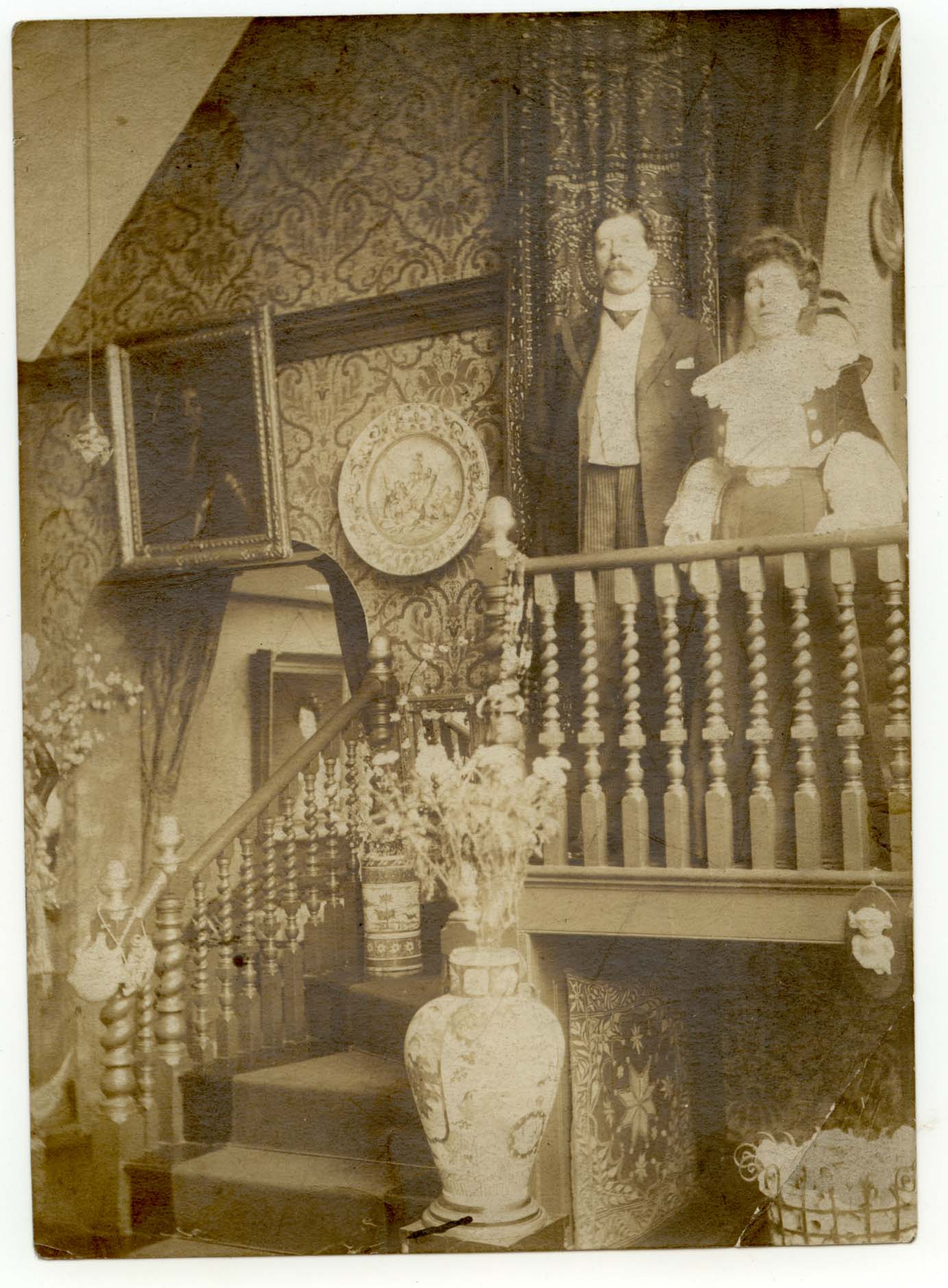 Charles and Wilhelmina Stirling at their first home, Launceston Place

Wilhelmina married Charles Goodbarne Stirling (1866-1948) in 1901, William De Morgan gifted the couple a leopard and stag dish as a wedding gift. Wilhelmina and Charles were huge collectors of art and antiques, with both delighting in hosting tours of their home Old Battersea House. Wilhelmina kept carefully documented records of all the treasures, one of them being a black oak cabinet by Morris and Co. hand decorated by William De Morgan in oils, of George and the Dragon. This cabinet is currently at The National Trust property, Standen House and Gardens used to display some of William De Morgan’s ceramics.

The BBC interviewed Wilhelmina Stirling when she was in her nineties (1961), director Ken Russell was intrigued not just by Wilhelmina, but also her home Old Battersea House. Wilhelmina and her husband saved Old Battersea House from demolition in 1931, they were given a lifetime lease and paid only a nominal rent. She was a well-known icon in Battersea, continuing to give tours of her house, while her manservant Mr Peters held a lamp to light the way. In the clip (see link below) she talks to Ken Russell about the hauntings at Old Battersea House, the interview concludes with a tale about her bed where the ‘Naughty Lord Dorchester’ died looking straight at the camera she asks ”One thing I do want to know, is can you catch a cold from a ghost?”. I find her deadpan humour endearing, so much so I just had to get a copy of her book, ‘Ghosts Vivisected: an impartial inquiry into their manners, habits, mentality, motives and physical construction’, published in 1957, it did not disappoint from the pre-face which she calls ‘the explanation’ had me chortling out loud. 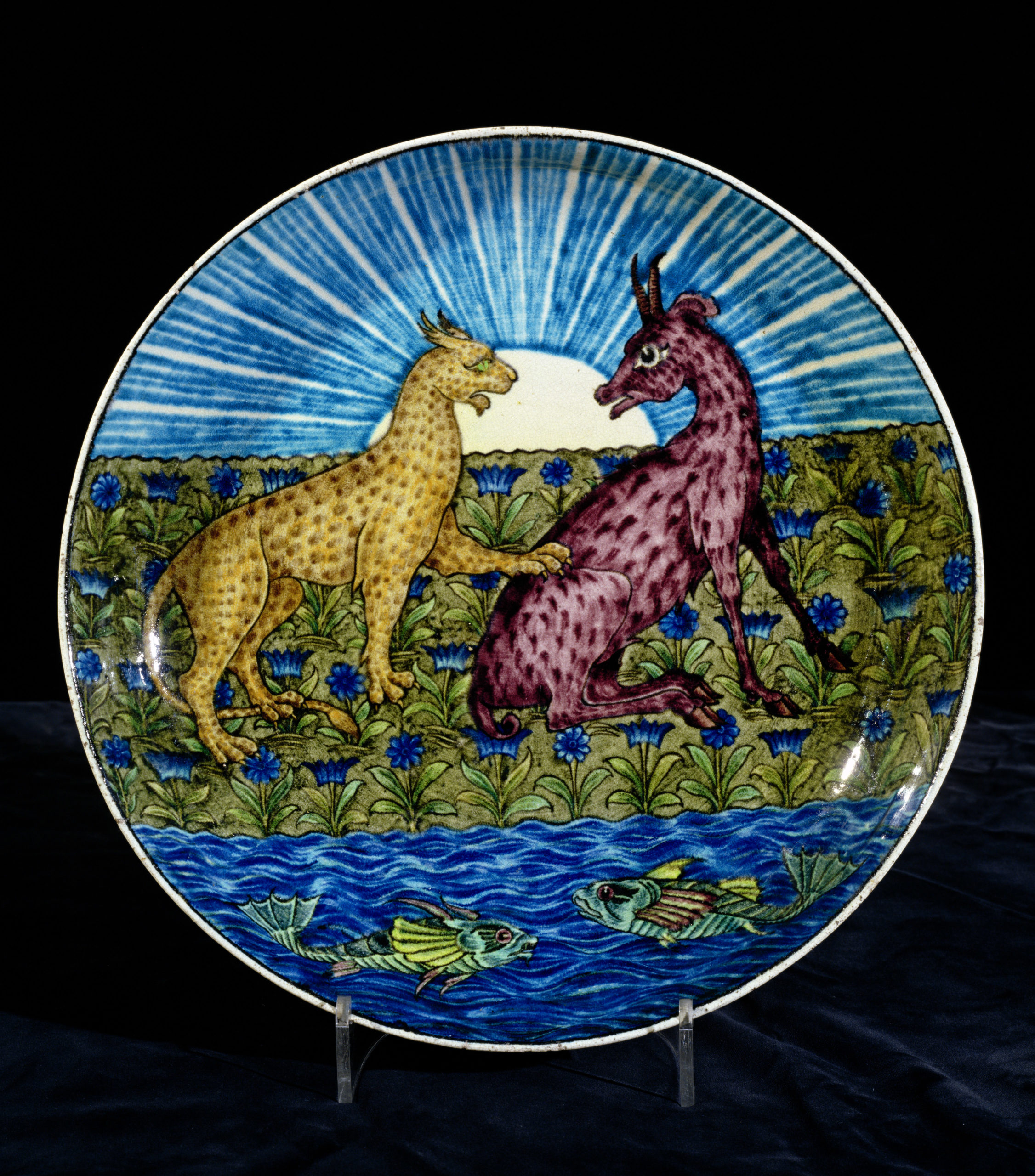 She was a prolific writer, widely published from 1890 at the age of just 25, until her last book ‘A Scrapheap of Memories’ in 1960. Wilhelmina’s first novel, ‘The Adventures of Prince Almero: A Tale of the Wind-Spirit’, was written to entertain her cousins when she was a child, re-finding and editing the book some years later it was published in 1890. Her novel ‘A life Awry’ published in 1893, writing under the pseudonym ‘Percival Pickering’, to honour her father, it became a stage production in 1899. Her writing was not just fictional with most of her work about the landed gentry; her mother’s ancestors, artists that she met including her sister and brother-in-law Evelyn and William De Morgan.

I found myself admiring Wilhelmina’s spirit she sounded like a lady full of fun with an enquiring mind, although Lawton-Smith (2002) had a no such experience when researching for her book ‘Evelyn Pickering De Morgan and the Allegorical Body’. Lawton-Smith dismisses Wilhelmina’s biography that include notes about her sister on the basis that Wilhelmina’s memory would have been unreliable some years after her sister’s death, but the De Morgan archives hold some of Evelyn De Morgan’s diaries, which I feel makes Wilhelmina a reliable biographer. Lawton-Smith goes further criticizing Wilhelmina for adding Evelyn as an afterthought instead of being the main character of a book about William De Morgan, entitled “William De Morgan and his Wife” written in 1922, and again in another book about some of Williams contemporaries, Lawton-Smith then changes tact, stating that Wilhelmina “seen as heroicizing her sister”, I see no issue with Wilhelmina admiring her elder sisters talent or having fond family memories. 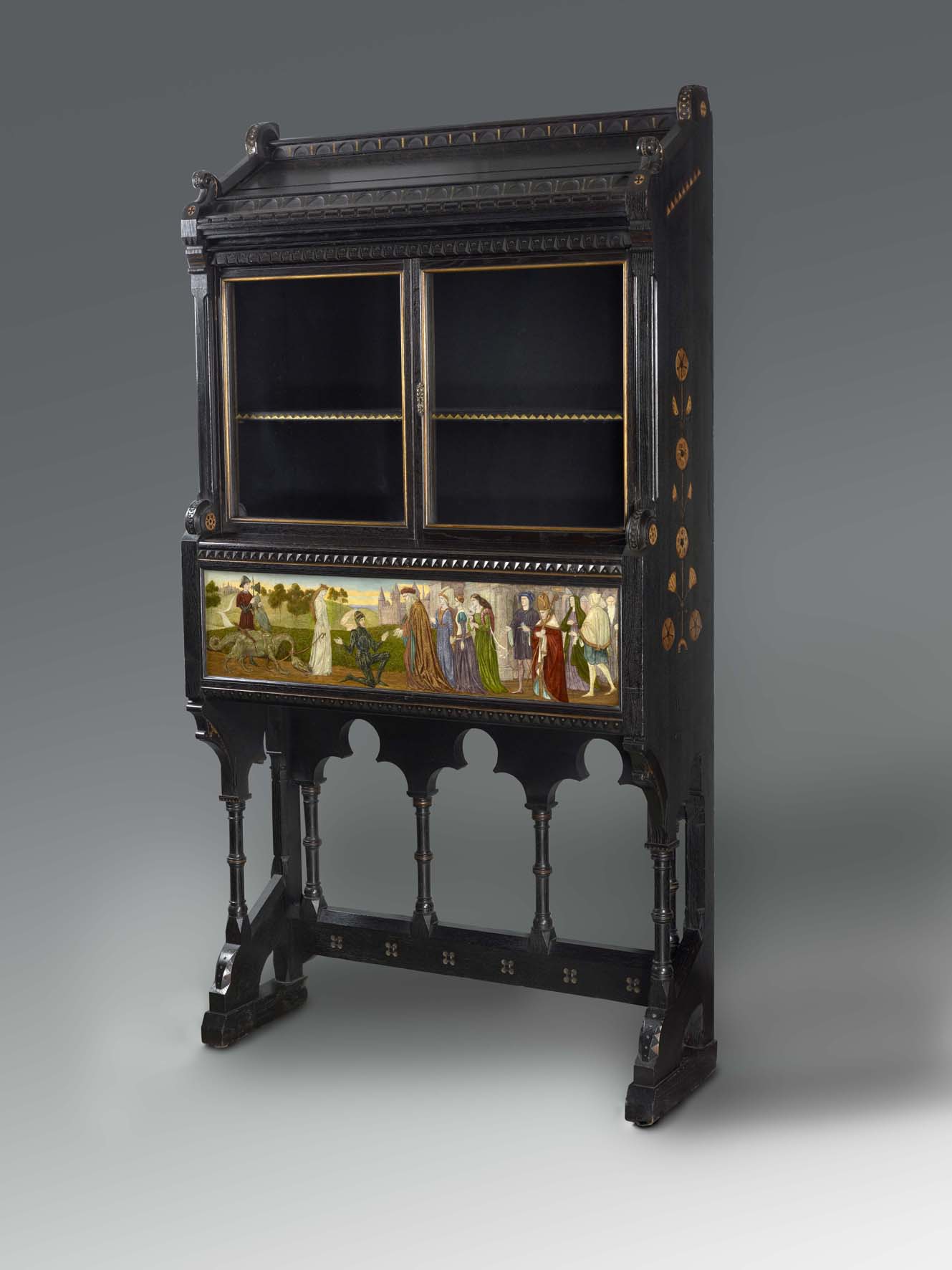 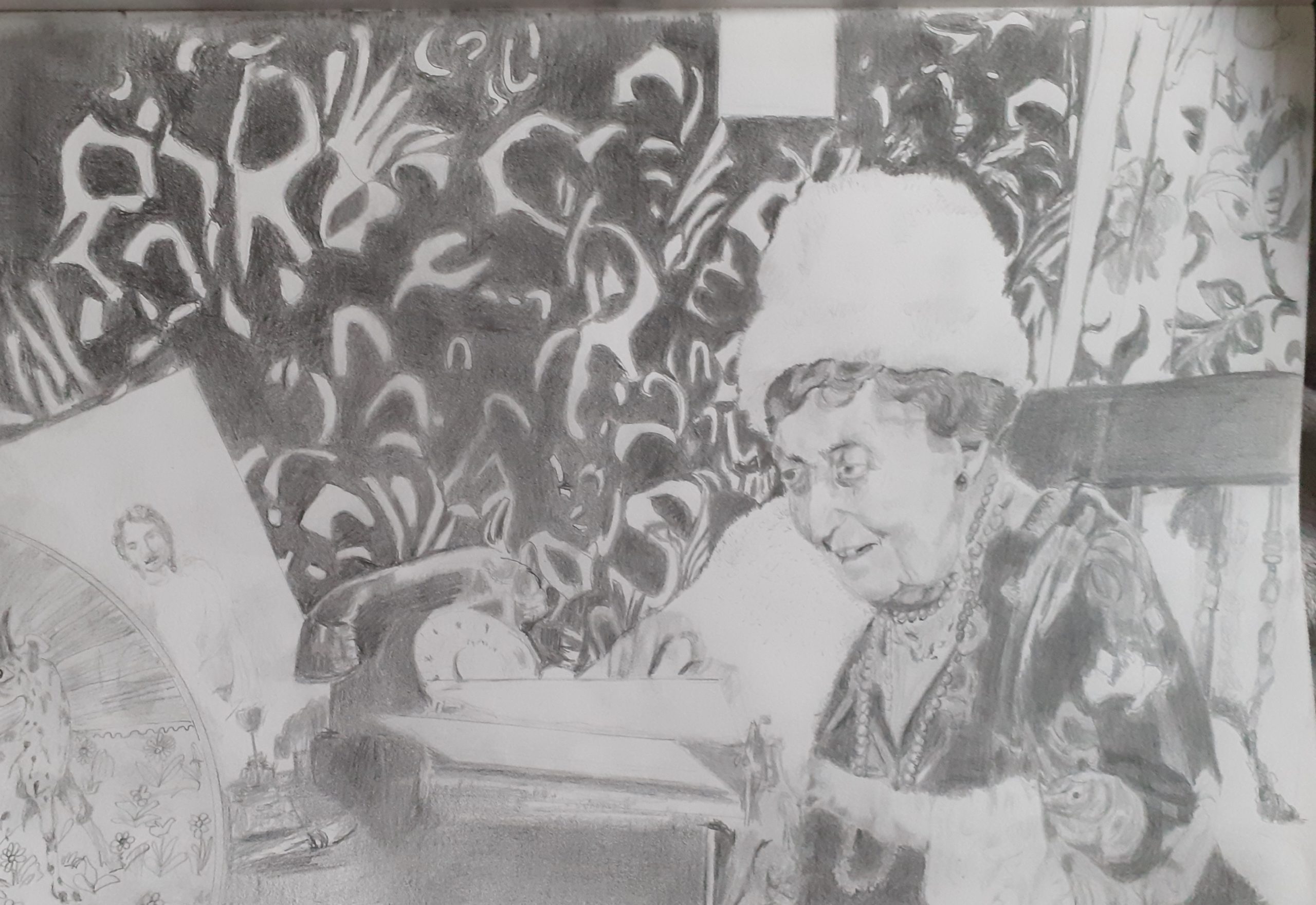 I am biased though because I have a great affection for Wilhelmina Stirling, which I hope you can see in my portrayal of her. I have sketched the photograph of her sitting at her typewriter, as I felt this was the most appropriate position for a published author. I have changed the plate in the far left corner to the one that William De Morgan presented to her on her marriage to Charles, as I felt this was not only romantic but showed the sentimental side of her personality along with her prolific collecting of her sister and brothers-in-law art. My first portrait was a cropped head and shoulder image of her, but I soon disregarded this composition as it did not really capture her personality. I wanted to capture the spirit of this elegant glamorous nonagenarian, in all her glory of furs, dripping in jewels, sitting at her typewriter surrounded by her belongings with the over the top Victorian style wallpaper. It took me over fifteen hours to complete all the little details in 2B and 4B pencil on A3 cartridge paper, I am pleased with it apart from she has a wry smile in my version, which is fitting as this is how I envisage her.

Wilhelmina died in Germany in 1965, just 15 days before her one hundredth birthday.