Which Snark came first? The tiles or the poem? 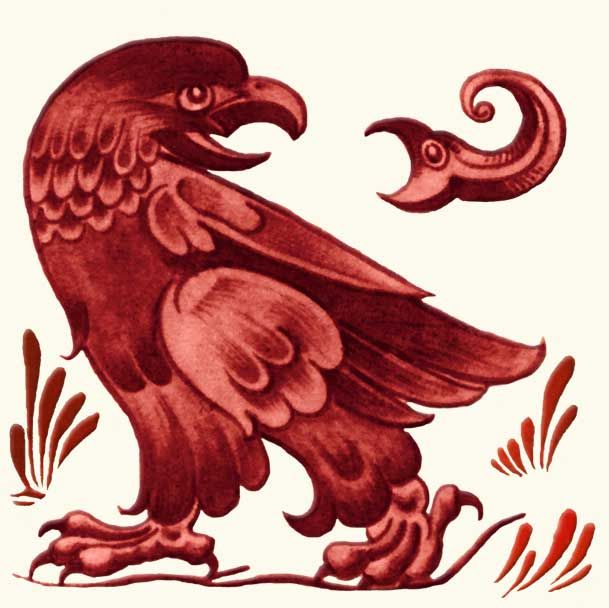 I knew there was some controversy surrounding who inspired whom to create fantastical creatures. Had William De Morgan’s ceramic tiles, purchased by Charles Dodgson for his Christ Church room whilst he was an Oxford professor of mathematics, inspired this writer we know best as Lewis Carroll to write about his surrealist stories, or had Lewis Carroll’s stories inspired De Morgan to create the fantasy animal tiles?

Lewis Carroll, born Charles Lutwidge Dodgson (1832-1898), was the third child of a family of seven girls and four boys, to cousins Frances Jane Lutwidge and the Reverand Charles Lutwidge. Dodgson started writing from an early age, at just twelve he regularly wrote for the rectory magazine. He attended public school, which he hated, partly due to being teased for his stammer, which he called his ‘Hesitation’. It was while at public school he suffered an illness which left him deaf in one ear, despite this set back he received glowing reports from his teachers, stating he was incredibly intelligent.

In 1851 he was an undergraduate at Christ Church, Oxford, later becoming a deacon and tutor of mathematics. The Dean was Henry Liddell, father to Alice (in wonderland) Lorina and Edith. Miss Prickett, the Liddell children’s governess was the inspiration for the red queen, for the sequel to Alice, Through the Looking Glass, published in 1871.

The first edition of Alice’s Adventures in Wonderland was printed in 1865, but was withdrawn because of poor quality printing, the revised version was printed the same year but dated 1866. Incidentally, Salvador Dali (1904-1989) illustrated Alice’s Adventures in Wonderland in 1969. The original however, was illustrated by John Tenniel (1820 – 1914). Unbelievably, Tenniel had lost the sight in his right eye, while fencing with his father as a young boy and did not retire as principle cartoonist at Punch magazine until he was eighty years old and almost completely blind.

The Hunting of the Snark: An Agony in Eight Fits (eight-canto poem) published 1st April 1876. A date carefully chosen by the author as it was April fool’s day. Fun fact: The Hunting of the Snark’s first print run was for 10,000 copies and the book has rarely, if ever been out of print since. An original first edition signed by the author can be found for the princely sum of £12,500 on a well-known book site.

Dodgson did not create illustrations for The Snark, but the characters’ descriptions were based on his own life. The baker is said to be a self-deprecating self-portrait in which Dodgson pokes fun at his own well-known forgetfulness. The Baker has forty-two boxes of luggage and Dodgson was forty-two years old when he wrote The Snark. Dodgson first dipped his toe in visual art through photography in 1856, taking more than three thousand photographs. It was shortly after 1864 that he met and photographed Ellen Terry (1847-1928), the artist G F Watts’ (1817-1904) first wife. It was Watts second wife, Mary (Mary Seton Fraser Tytler) (1849-1938) who built the Watts Gallery, in Compton, where some of the De Morgan collection is on display. The gallery is just outside of Guildford where Dodgson’s sisters lived, on his last visit he caught an illness, died, and consequently buried in the Mount Cemetery, Guildford.

G F Watts, was not just admired and visited by his contemporaries, but he also visited them. Artist Henry Holiday (1839-1927) wrote in his memoirs when he was working on his sculpture of ‘Sleep’ he was pleased that Watts and Cave visited him in his studio. Holiday also wrote in his memoir that he first met C. L. Dodgson in 1869, and the two instantly became good friends. Eventually, Dodgson asked Holiday for three illustrations for The Snark (Holiday p244). Each time a cartoon was completed, Dodgson had written another canto and asked for a further cartoon, this went on until Holiday had completed nine drawings. Dodgson gave Holiday a presentation copy of the finished work, with the following inscription.

“Presented to Henry Holiday, most patient of Artists by Charles L Dodgson, most exacting, but not most ungrateful of Authors March 29th, 1876”.

Wilhelmina Stirling (1865-1965) wrote in her biography William De Morgan and his Wife, how Holiday and De Morgan were friends who used to coax each other to draw ever more fantastical pictures, for the other to annotate. They met at the Royal Academy in 1859.

The first mention of De Morgan in Dodgson’s diary was in 1882, when they first met each other. In 1883 he records William De Morgan visiting his rooms in Oxford.

Tenniel thought Dodgson was a control freak and warned his successor, Harry Furniss (1854-1925) against taking on the commission for Sylvie and Bruno (1885). Dodgson’s inscription to Holiday also eludes to his exacting standards. This does imply Dodgson would have been extremely specific concerning the images for the tiles in his room at Christ Church. Dodgson did record that he had chosen some red tiles for the common room, which insinuates he chose from a catalogue of designs, rather than commissioning his own unique composition. Dodgson’s bank record for 11th December 1886, reveal he paid De Morgan £52.10; I think it is a fair assumption that this payment was for the ties to decorate his room at Oxford. 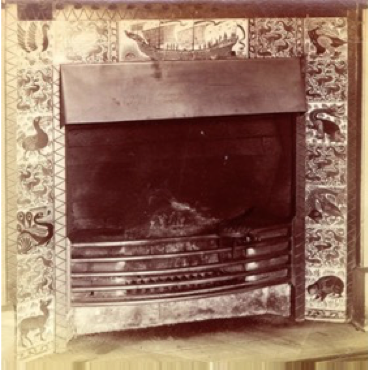 Dodgson’s nephew Stewart Dodgson Collingwood, wrote two biographies of his uncle. In the one entitled The Life and Letters of Lewis Carroll he published a photograph of the common room, which does show the fireplace with the red lustre William De Morgan tiles. 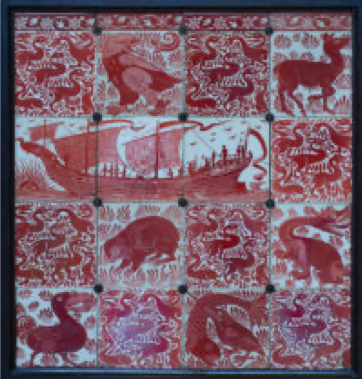 A version of the Eagle and Snark tile depictured top row, second from the left, recently sold at auction for £3000. The tile design was listed as being in production from 1882 to 1888, which fits in neatly to the date Dodgson brought some red lustre tiles for the common room. Although Dodgson and De Morgan did not meet until 1882, it is possible that The Snark, printed for the first time in 1876, could have been seen by De Morgan and used to inspire his red lustre fantastical creature tiles. De Morgan was also very good friends with Holiday fourteen years earlier and would have been aware of The Snark from his friend’s commission for the illustrations, and probably from their games of drawing more and more ridiculous creatures.

My conclusion is that Dodgson was not inspired by De Morgan’s tiles to produce some of his characters or vice versa, it is in my opinion that it is much more likely that they had similar tastes and interests, designing their own games to entertain family and friends. Dodgson, from an early age was a prolific writer with a track record of being intelligent, cultivated, and imaginative, and therefore more than capable of constructing fantastic creatures of his own design. Both Holliday and De Morgan were artists, students at the Royal Academy, even though De Morgan completed only four of the required eight years, they were very obviously creative and innovative people. Documented evidence, from Holiday’s memoires and De Morgan’s biography is proof that both artists played a game together where they designed ever increasing fantastical beasts, inspired not just by each other, but by fairy tales, folk law and imagery from around the world. I believe that Dodgson was drawn to Holiday and De Morgan because of their mutual interest in the imaginary fantastical world. Recognising mutual inventive souls and all three men held each other’s abilities in high regard and that is what led to equally fabulous artistic creations.

I approached this research using different process, usually starting with a drawing, closely interrogating the original artists process before checking written facts. My starting point this time however, was to uncover the legend of who inspired who to design their imaginative creatures, afterwards producing a drawing. In this instance and to honour of all three men, William De Morgan, Charles Dodgson and Henry Holiday recreating the court scene from the Hunting of the Snark, would be a fitting tribute. I was not only personally drawn to that scene in particular, but I also felt the illustration would work as a way to include portraits of them, the Snark itself, and one of De Morgan’s tiles as an emblem in the corner. 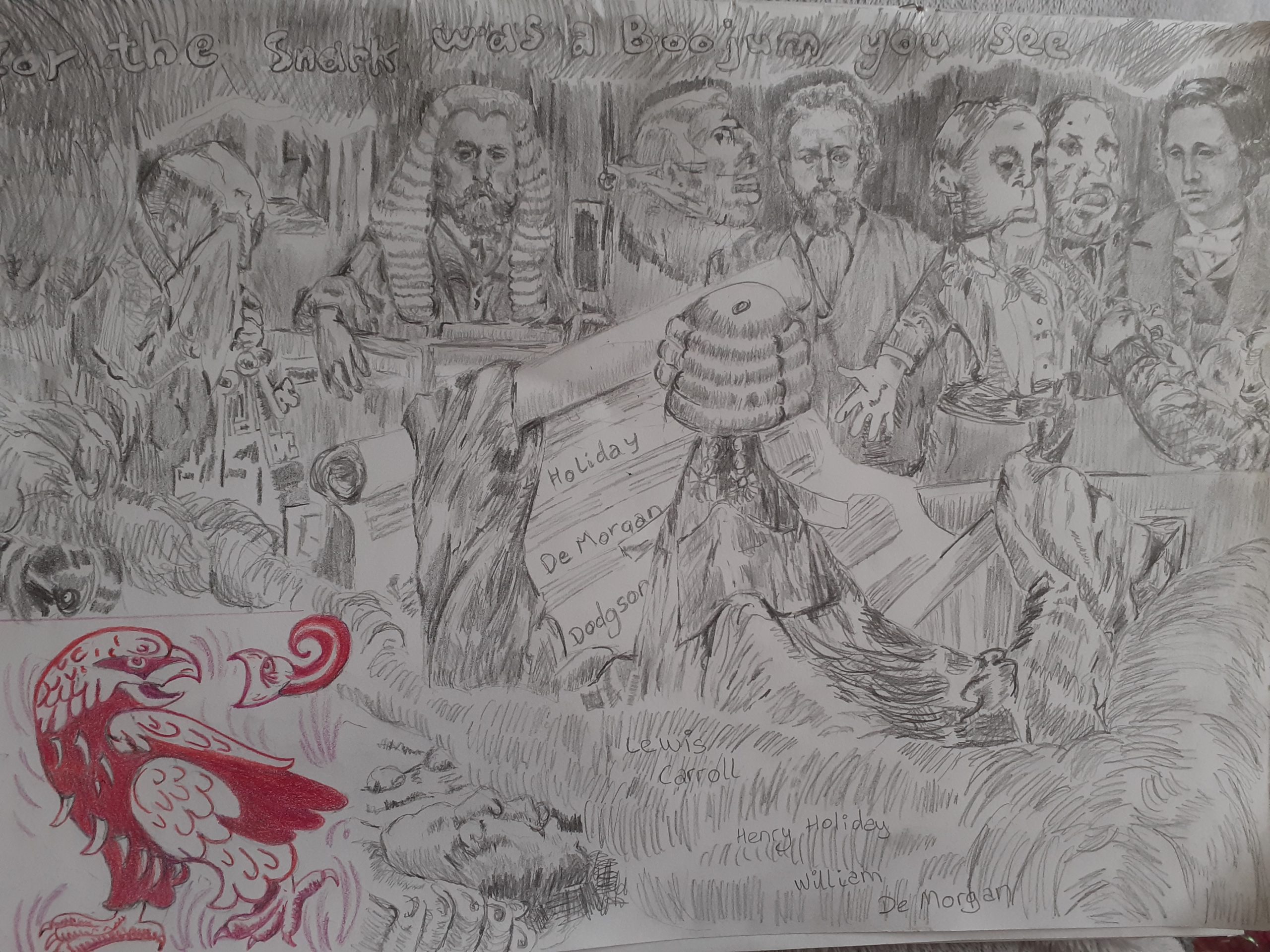