GALLERY IS CLOSED ON MONDAYS

This stunning new exhibition at Leamington Spa Art Gallery offers you the chance to rediscover a host of ‘forgotten’ British artists working at the turn of the twentieth century.

The pictures selected by curators Alice Eden and Jame Simkiss are truly captivating. Whether its the ghostly apparitions, moonlight colours or odd compositional arrangement, each work on display is arresting and requires a second look to fully comprehend.

Evelyn De Morgan’s Queen Eleanor and Fair Rosamund (1904) plays with bizarre imagery to ask us to reassess what is good and what is evil. It depicts Queen Eleanor, wife of Henry II, who followed her husband’s string through a labyrinth to discover his mistress. The two women are depicted at the moment Eleanor discovers Rosamund. A vile of poison she clutches indicates her vengeful plan. She is surrounded by ethereal dragons and grotesque monkey heads, emphasising her evil whilst ‘fair’ Rosamund conjures a flock of doves and sickly sweet cherubs who weep for her. Of course, the king is absent and so escapes judgement making this a painting which focusses on opinions of women in a world where they are subject to the patriarchy. 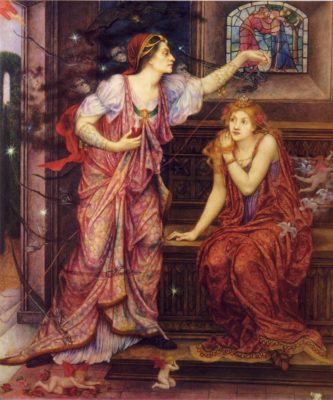 Happily, trailblazing women artists such as De Morgan paved the way for change in the art world and recently women Pre-Raphaelites are becoming recognized. Alongside De Morgan’s painting hangs a curious work by Margaret Gere (1878 – 1965). Entitled Garden of the Slothful what immediately catches your eye is the bright red macaw and a big black hog painted in vivid colours against a pale yellow hue across the background. Working in tempera (egg yolk and pigment) on silk allowed Gere to create such an unusual and mesmerising colour palette. The picture warns against one of the seven deadly sins, as a slothful couple yawn and lie in bed, their livestock roams free among the thistles and thieves steal grapes from their vines, visible through a broken stone wall. A child in red holds up a white flower, as if pleading with the lazy couple in the upper storey. The subject of this work is taken from the Bible: ‘I went by the field of the slothful, and by the vineyard of the man void of understanding. And, lo, it was all grown over with thorns, and nettles had covered the face thereof, and the stone wall thereof was broken down’ (Proverbs 24:30-31). 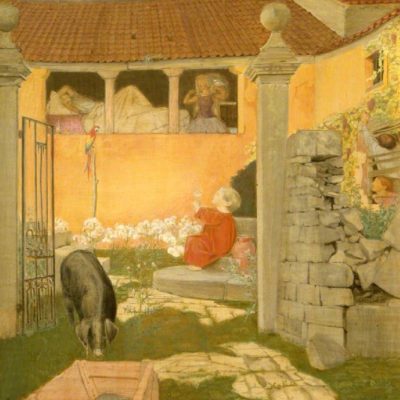 Gere, Margaret; The Garden of the Slothful; Royal Holloway, University of London; http://www.artuk.org/artworks/the-garden-of-the-slothful-12947

One of the highlights in the show is Arthur Hacker’s spooky reimagining of the Annunciation. As soon as you enter the gallery the direct stare of the young virgin Mary meets your eyes with such an intensity you can almost feel the enormity of the moment she herself encounters. For over her shoulder is the ghostly apparition of the angel Gabriel whispering in her ear. It sends shivers down your spine. 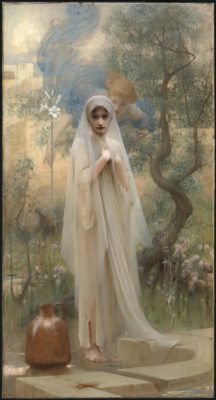 Curator Alice Eden was keen to use this exhibition to highlight the work of Frederick Caley Robinson, an artist, illustrator and engraver whose ability to paint with moonlight give his works an otherworldly quality. A master of composition, he controls how we access this world, only offering compromised glimpses or half of the story. In particular, I was captivated by his The Nightwatch which has the palpable tension of falling asleep, dreaming, and entering another world. His pictures are intriguing and enticing and leave you wanting more. And thankfully there are over ten works by Robinson on view to satisfy this. 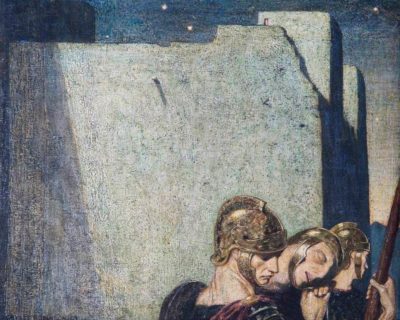