On this week’s blog, De Morgan volunteer Bernard gives an overview of the history of lustre glazing, which was so brilliantly reinvented by William De Morgan in the late-19th century.

Lustreware (OED: ceramic articles with an iridescent metallic glaze) has a long and distinguished history. Thought to have originated in Egypt prior to the rise of Islam, its early development took place in various centres throughout the Middle East, and has continued up to the present day elsewhere.

The name “Lustreware” arises from the iridescent or luminous effect imparted to glazed ceramics which, following the initial firing, have been taken through further treatment with metal oxides, followed by a second kiln-firing. Traditionally copper and silver oxides were used but latterly the range has been extended to include salts of gold, platinum and bismuth. The process involves decoration of the glazed ceramic with the chosen metallic oxide, then a re-firing in a reducing atmosphere (muffle furnace) at a temperature sufficient to soften the glaze (typically around 1100 degrees centigrade). The metal oxide is thereby reduced to an ultra-thin iridescent layer of the pure metal.

The reductive process is somewhat unpredictable and much experimentation is necessary with conditions to achieve the desired result. Silver oxides impart a “gold” effect to the successfully-fired product, whereas gold oxides impart a lustre varying from pale rose to lavender depending on the metallic concentration used.

A metallic lustre coating is quite fragile and is easily damaged by abrasion or exposure to acids. Thus, lustreware was, and is, primarily designed for decorative purposes.

Historically, the technology for producing successful lustreware was developed in the 8th century during the Abbasid Caliphate (750 to 1258 CE) in Iraq. Manufacture was centred mainly in Baghdad, but Basra and Kufa were also important centres. Interestingly, early Mesopotamian craftsmen experimented with polychrome lustre effects, but gradually monochrome finishes, based on silver and copper salts, became dominant. 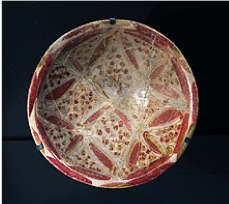 Somewhat later, Egypt became the major centre for lustreware production. Centred in Cairo, the Fatimid Caliphate (909 to 1171 CE) was, perhaps, the period when lustreware design reached the peak of aesthetic achievement due, in part, to the exquisite painting used on the ceramic surface.

Following the fall of the Fatimid dynasty, lustreware craftsmen migrated from Egypt to Persia and Syria. The greatest developments in Persian lustreware occurred between 1150 and 1200. Communication along the “Silk Road” brought improvements in glazing technology and influences from Chinese porcelain manufacture. Centred on Kushan, Persian lustreware production was principally in the form of tiles based on six- and eight-pointed stars, and frequently combined a cobalt-blue underglaze with a lustre overglaze. 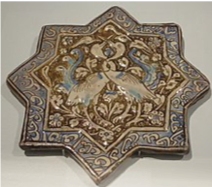 Following the Mongol invasion the quality of Persian lustreware declined, ceasing altogether in the middle of the 14th century. Revived during the Safavid dynasty (1502 to 1736 CE) it flourished once more in the late 17th and early 18th centuries.

Exiled craftsmen from Fatimid Egypt also established workshops in Raqqa, Syria. Production flourished between 1250 until the destruction of the city in 1259.Thence manufacture moved to Damascus, and continued here until the start of the 15th century. The influence of Syrian design  is apparent in both subsequent Spanish and Italian lustreware.

Jumping forward now to the early 19th century, the Industrial Revolution in England resulted in a great revival of interest in lustreware. Major centres for its production were Staffordshire Potteries and Wedgewood; their products, however, were largely intended for commercial outlets.  Innovation in manufacturing showed the possibilities of using other compounds; for example, platinum salts were found to produce a lustre effect similar to pure silver, and the use of bismuth salts was found to produce a mother-of-pearl lustre effect.

In the late 19th century, under the influence of the Aesthetic Movement, William De Morgan revived the use of lustre effects in art pottery. His designs, based on animals and medieval motifs, were bold and finely-executed. Initially, work was restricted to tiles but later expanded into vases and bowls.

A subsequent introduction by Lord Leighton to the beauty and intricacies of Islamic lustreware served as an inspiration to De Morgan, and greatly influenced his later designs. 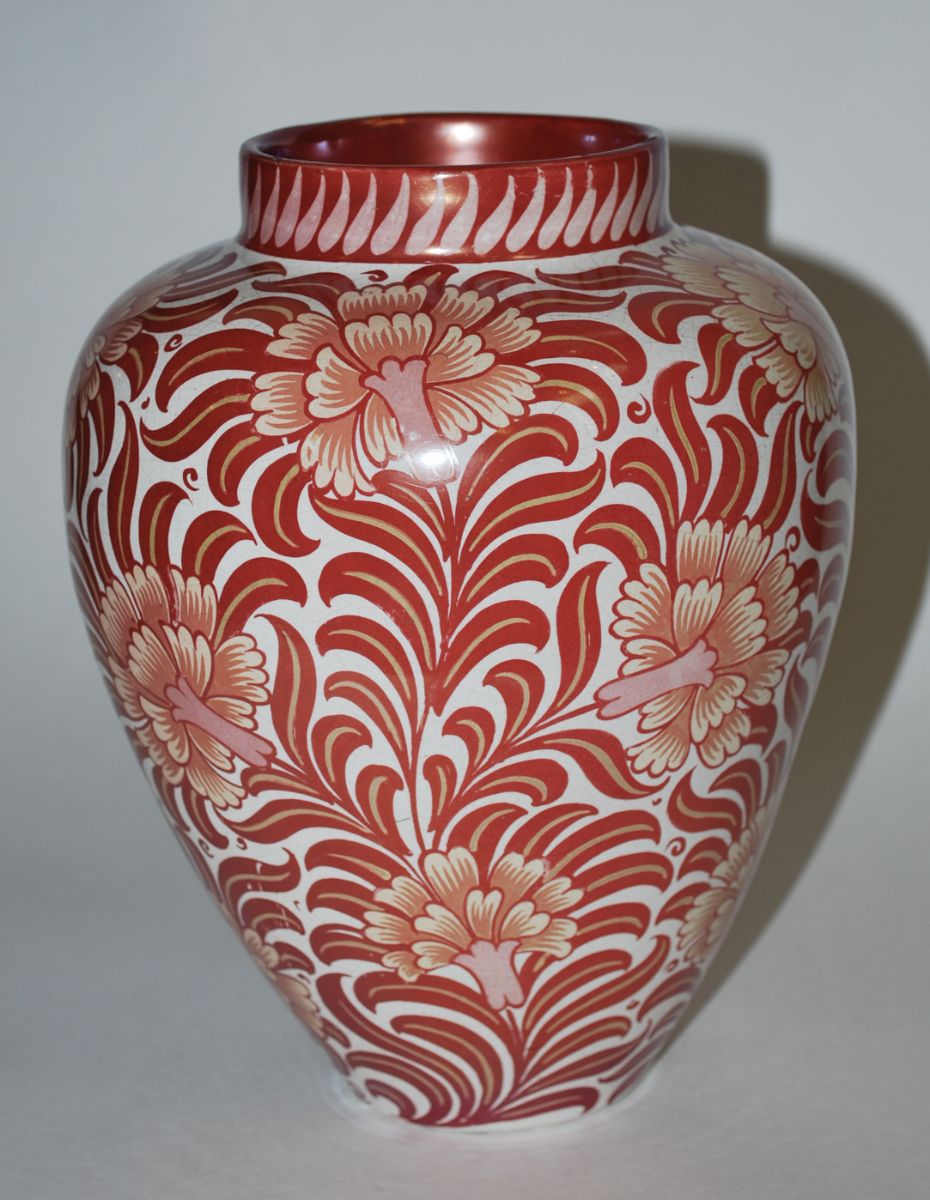