A Family of Artists

The artist John Roddam Spencer Stanhope was a friend and collaborator of the Pre-Raphaelite Brotherhood artists. He worked with Dante Gabriel Rossetti on the Oxford Debating Chamber Murals and welcomed William Morris and Edward Burne-Jones to his home in Cawthorne, West Yorkshire. Spencer Stanhope’s family was from Cannon Hall and descended from Coke of Norfolk, an Earl of Leicester.

He was proud of his home and heritage and decorated many churches in the area for the local community, often featuring his own artworks and and commissions of stained glass from his friend William Morris.

Through these connections, is it is probably that Spencer Stanhope knew William De Morgan at the start of his career as a ceramic designer. 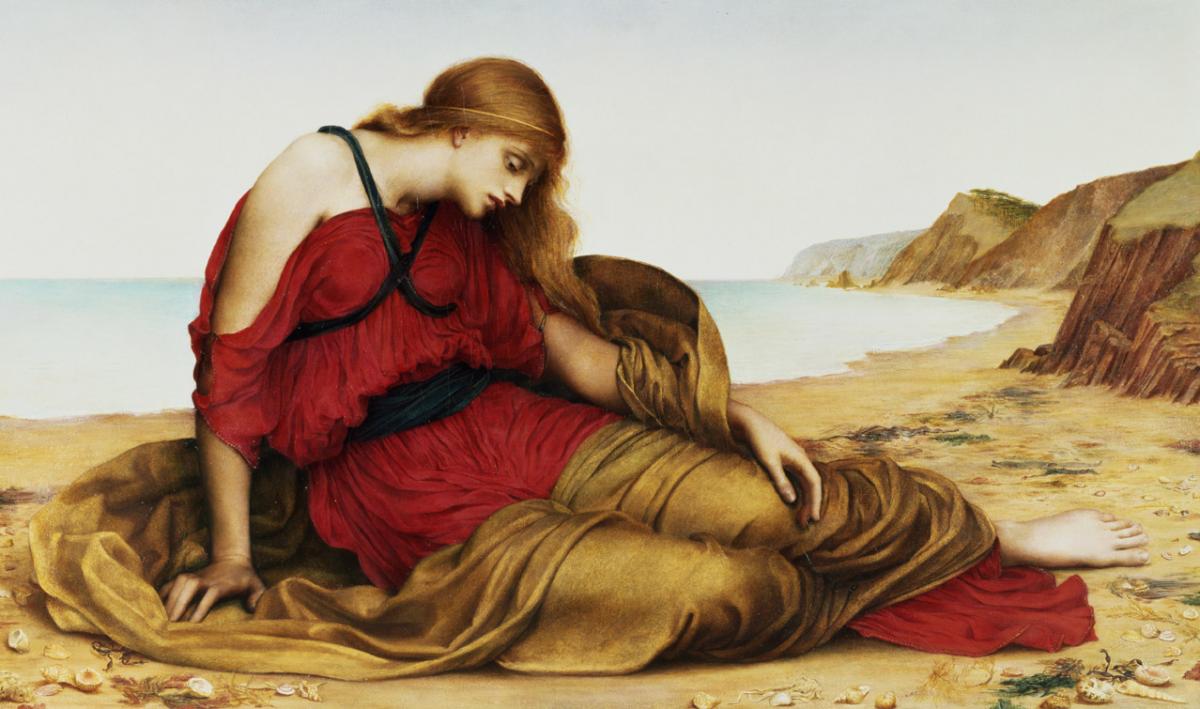 Ariadne at Naxos (1877) by Evelyn De Morgan, painted in the Aesthetic Style

Spencer Stanhope was Evelyn De Morgan’s beloved uncle. He supported her early ambitions to become an artist and persuaded her conservative parents to allow the child prodigy to pursue what was a decidedly unsavoury career for a young woman. With his help, she was allowed to study at the Slade School of Art, a radical new art school at University College London which allowed women to draw from life models. Something so frowned-upon that even at the Slade women were only permitted in the life studio until 5pm. Evelyn studied under Sir Edward Poynter, a colleague of her uncle and a fellow follower of the Aesthetic Movement. This teaching is evident in Evelyn’s early paintings which celebrated beauty and form above all else; ‘Art for Art’s Sake’.

Spencer Stanhope took out a lease on Villa Nutti just outside of Florence in the same year Evelyn started her study at the Slade and with him as a chaperone, Evelyn was able to travel to Italy and the two would visit Old Master Renaissance paintings at the Uffizi Gallery in Florence, where the work of Botticelli became a crucial influence on Evelyn De Morgan.

In 1883, Evelyn De Morgan travelled to her family’s home at Cannon Hall to work on a commission to decorate the organ panels at Cawthorne Church, which would hang next to the pulpit designed by Spencer Stanhope. She experimented with different techniques to her usual oil painting for the organ panels, probably with her uncle’s guidance as he was a celebrated tempura (pigment and egg yolk paint), watercolour and oil painter. She decided upon painted gesso – rabbit skin glue mixed with chalk – for the panels and practiced with this medium on her Medusa Roundel. She built up the gesso to make a relief face, before painting this in gold.

Working on this church commission and working so closely with her experimental uncle, whet Evelyn’s appetite to experiment further with her painting techniques and 1883 – 4 became a particularly significant year for her in terms of variety of output. Her masterpiece By the Waters of Babylon (1883) has been painted and then painstakingly burnished – rubbed with a rounded glass rod to smooth the paint – to give the faces of the displaced Jews a dewy complexion and youthful innocence, heightening their vulnerability upon being exiled from Zion.

With a texture like the Italian Frescoes (wall paintings) Evelyn may have seen in Italy, The Salutation is another experimental technique. The artist has used a thin oil paint on an absorbent board, making the paint very dry and brittle. She has had to battle against the fast-drying paint – evidenced in the bold outlines of the figures’ hands, which is atypical of her work – forcing her to apply it in short, sharp strokes of colour. 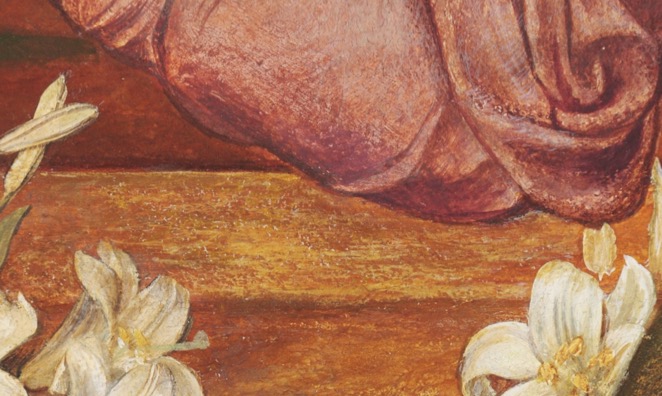 Detail of The Salutation showing the brush strokes and flaky, dry paint surface 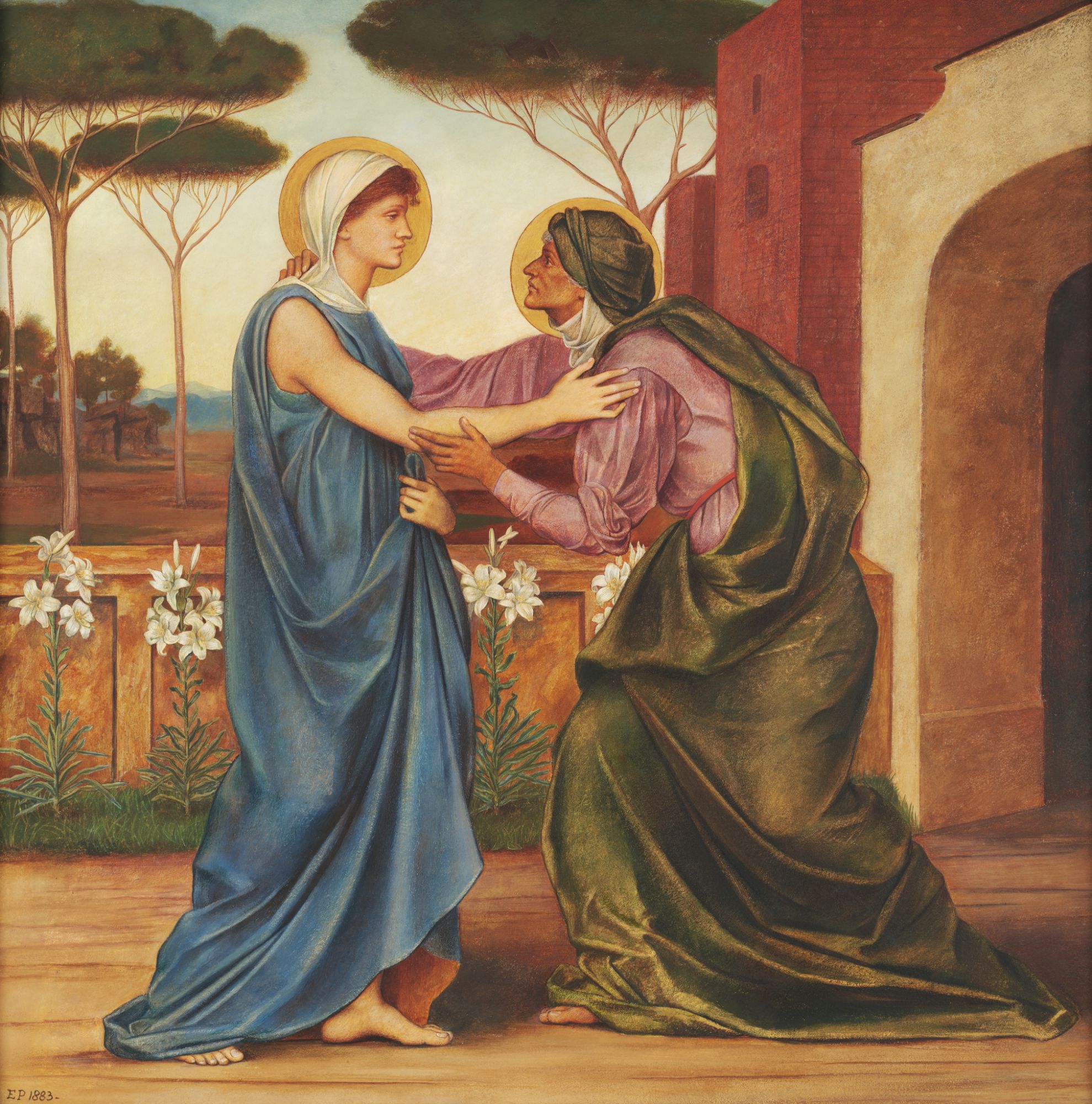 The Salutation (1883) by Evelyn De Morgan

Biblical scenes became the central focus of her oeuvre during her brief period working on the Cawthorne church commission. Resurrection and life everlasting were bold concepts which drew Evelyn in and through her work she began to question the human condition, spirituality and religion.

When Elizabeth heard Mary’s greeting, the baby leaped in her womb; and Elizabeth was filled with the Holy Spirit. And she cried out with a loud voice and said, “Blessed are you among women, and blessed is the fruit of your womb! “And how has it happened to me, that the mother of my Lord would come to me?

The Salutation focuses on the moment when physical touch between two women, who will come to bear Christ and John the Baptist, resonates with something deeply spiritual within them. This scene is the moment in which they become filled with the holy spirit. Evelyn De Morgan focuses on the moment in which human life is created and filled with a mortal soul. Since many of her pictures focus on the passing of the soul at death, it is interesting to note the moment she believed that the human soul first exists.

Could it have been the extended time that Evelyn spent with Spencer Stanhope in 1883 that led to her meeting with William De Morgan? Purportedly, the two met at a fancy dress party, where she was dressed as a tube of Rose Madder paint to which William quipped that he was ‘madder still’. Whether Spencer Stanhope encouraged the meeting is undocumented, but his relationship with both of them may have helped to move them in the same circles.

From 1890, Evelyn and her new husband began living in Florence, close to Spencer Stanhope, during the winters. Some of William’s most exciting ceramics hail from this period, when he was working with the Italian Cantagalli Pottery on three dimensional designs.

The exhibition ‘A Family of Artists’ at Cannon Hall Museum explores these artists’ familial and local connections to understand the impact of their art on each other and on the wider art movements they were associated with.