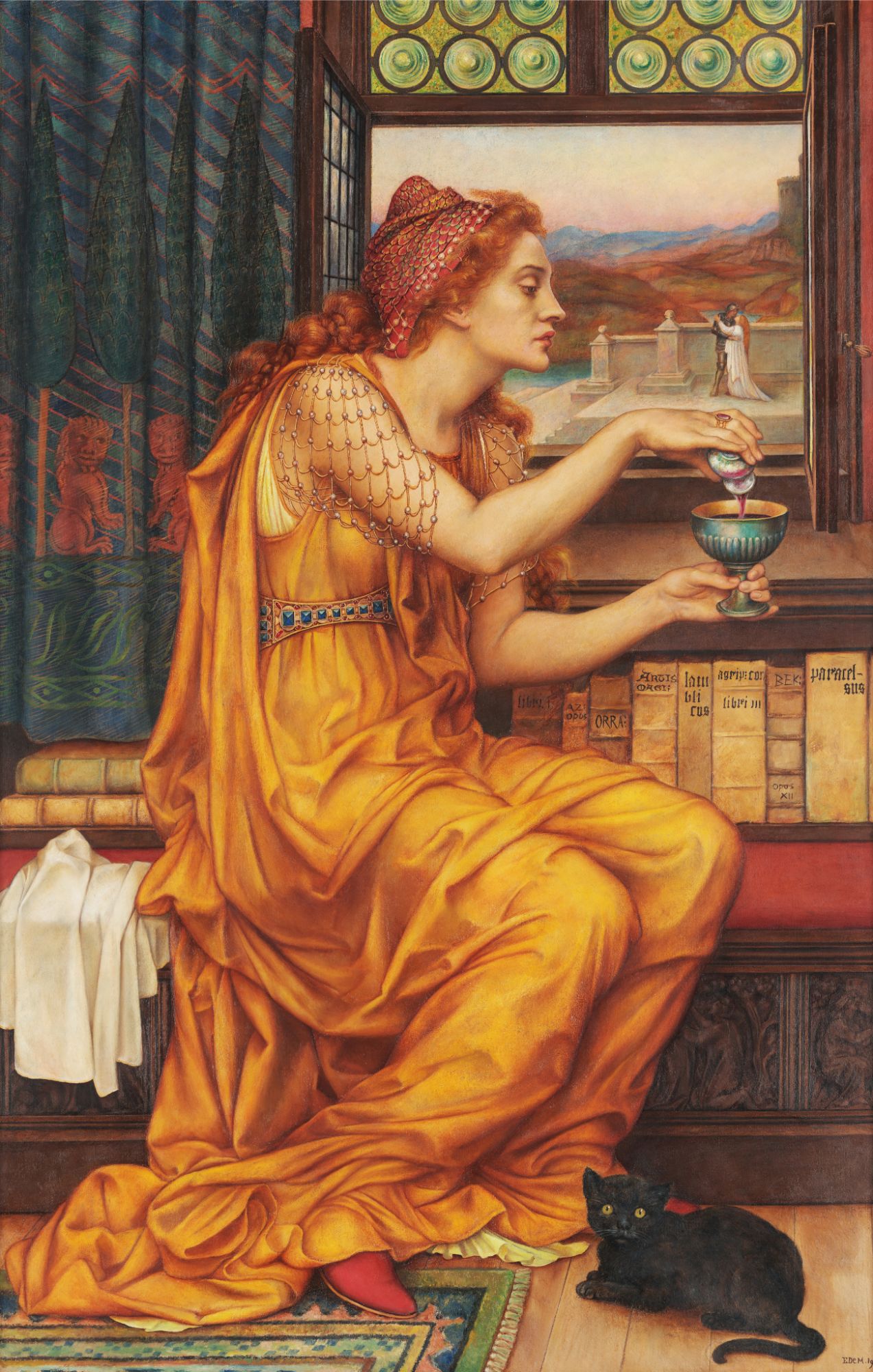 
Evelyn De Morgan painted several subjects using medieval themes and stylistic devices which had been made popular by the Pre-Raphaelites, these paintings included Queen Eleanor and the Fair Rosamund and The Hour Glass.

The female figure in the painting has often been mis-categorised as the devious witch from fairy stories, not least by Mrs Stirling (Evelyn De Morgan’s sister) who described the painting in her “Catalogue of the De Morgan Collection of Pictures and Pottery” as follows: ” A witch in bright yellow, with a callous, cruel face, mixing a potion to upset the lovers who are seen on the terrace in the distance. Along the shelf by her side are books upon Black Magic, one of which is inscribed “Paracelsus”.

However, more correctly the painting should be categorised within De Morgan’s series of allegoric paintings on the progress of the soul towards enlightenment. Despite the inclusion of a black cat which hints by its very presence to the stereotypical depiction of diabolical sorceresses, the subject of the painting is presented as a learned scholar. She sits in a light filled study surrounded by luxurious furnishings, and equipment. The leather-bound books on the bookcase to her side are a clue and include works by some of the greatest scientific and philosophical minds and were texts well known to the Spiritualist movement in their pursuit of enlightenment and spiritual enrichment.

Paracelsus, was a Renaissance physician, botanist, alchemist, astrologer, and general occultist. Agrippa Von Nettesheim, was a sixteenth century physician and philosopher who wrote a treatise on alchemy and magic – De occulta philosophia libri tres / Three Books of Occult Philosophy However, as one of the leading experts of his century on this spiritual and ancient wisdom, he wished to purge magic of the superstitious and dangerous rituals of medieval witches  instead holding with theosophical principals that religion is a tool to help humanities evolution to greater perfection. Iamblicus was a Neoplatanist associated with theurgy or ritualistic invocation of the gods in order to unite with the divine. The book entitled A-Z Opus is an illusion to Azoth, one of the names for the “universal spirit of the world” or the alpha and omega which are everywhere and ever present.

De Morgans adherence to alchemical colour symbolism as promoted by Parcelsus also sheds light on her intent. In this system the four colours which mark the progressive stages towards spiritual enlightenment are black  the material state of guilt, sin, and death; white  the early stages or purification; red, then yellow  towards the gold of salvation. These stages parallel the Spiritualist ideas regarding the development of the spirit which involve a series of steps from the death of the profane, through purification and spiritual suffering toward the final goal of a harmonious union of opposites  represented in this case by the courting couple seen through the window. However the ultimate union is the synthesis of bodily into spiritual nature – as represented by the wisdom seeking alchemist herself. Accordingly we see in the painting the black of the cat  alchemical creature of the night, connected to prime matter (and ironic comment on witches); the red lions on the tapestry  a symbol for Christianity, strength and wisdom and finally the dominant colour within the painting  the golden yellow of the alchemists robes.

Thus whilst the painting is stylistically in tune with some of De Morgans late Pre-Raphaelite and Symbolist peers, Evelyns narrative is distinctly independent and allegorical. She uses her spiritualist vocabulary to subvert and renegotiates traditional roles and stereotypes of women, providing instead a strong, powerful, skilled intelligent protagonist, capable of reaching the enlightenment she herself sought.