Artworks ripe with fruit and veg

From Roman “Unswept Floor” mosaics, through apples grasped by infants in Dutch masterpieces, to familiar but indistinct citrus shapes in impressionist paintings, fruit and vegetables have constantly formed the subject of popular artwork in a wide range of cultures. This focus has always given the artist a showcase for observational skills of colour, shape and texture, but often, the subjects carried symbolic meaning too. 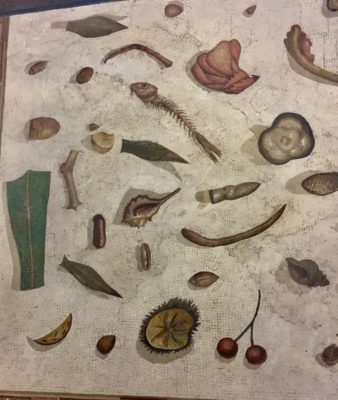 Much of the Western symbolism of food in art, and in particular fruit and vegetables, is rooted in the classics of Ancient Rome and Greece. Depictions of Bacchus, the Roman god of wine are frequently accompanied by grapes. The pomegranate, currently enjoying a fashionable resurgence in the modern “plant-friendly” diet, is a potent symbol of fertility in religious and secular art, as a result of its countless seeds. Links are also evident with Biblical stories. A widely used symbol in Western art is the highly recognisable apple which can represent evil and is central to the temptation of Eve in the Garden of Eden. The symbolism could have roots in the fact that the Latin word “malum” translates to both the apple itself and to the abstract noun, malice.

In the glorious days of the Dutch Masters, images of exotic fruit along with rare flowers and other expensive food items signposted the wealth and privilege of the person commissioning the painting. Plump, luscious fruit and vegetables were suggestive of an extravagant lifestyle. However, when the food showed traces of decay, or insects were depicted burrowing into the flesh, this was a salient reminder of the transience of all life and a warning against gluttony! 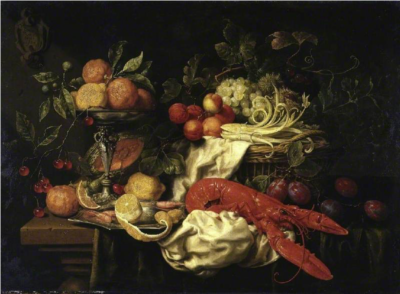 The lemon has symbolised a range of ideas in art throughout the centuries. In Dutch still life paintings, it was redolent of luxury and status, but in other contexts it is emblematic of bitterness and implies that what lies within might be at odds with a beautiful exterior. This is one possible explanation for the inclusion of lemon trees in Evelyn De Morgan’s painting, Garden of Opportunity. Here, two wealthy travellers are being offered the chance to choose between the paths of learning and the transient pleasures of life. The well-dressed woman, “Folly”, guiding them in their decision is seemingly helping them to choose but is undoubtedly acting duplicitously, to the despair of “Wisdom” pictured to the right. Folly is seeming to advise them, but is concealing a skull in her palm, hinting that this guidance will have unexpectedly dire consequences. Just like the lemon, an attractive appearance conceals a sourness of heart! 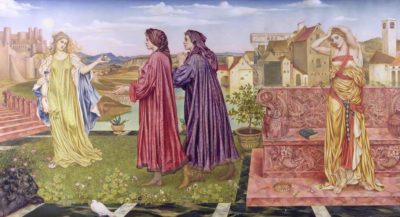 The Garden of Opportunity by Evelyn De Morgan

. Born in Milan in 1527, he was a conventional court portrait painter for three Holy Roman Emperors. However, in modern times, he is best remembered for his life-like portraits of subjects created from arrangements of fruit, vegetables and flowers. Impressive by the fact the paintings can seem like a study of a bowl of fruit in one orientation, but an animate, recognisable face in another, these portraits reveal Arcimbaldo’s talent for accurate and detailed study of flora, fauna, fruit and vegetables. His work is so skilled and precise that it almost forms an encyclopaedia of the varied botanical collections of one of his employers, botanist and zoologist Maximillian II. Luckily for Arcimbaldo, his sponsors had a sense of humour, as many in their lofty positions would expect more flattering likenesses. The fact that compositions were dotted with monograms and puns such as human ears depicted by ears of corn only increased Arcimbaldo’s appeal in their view. 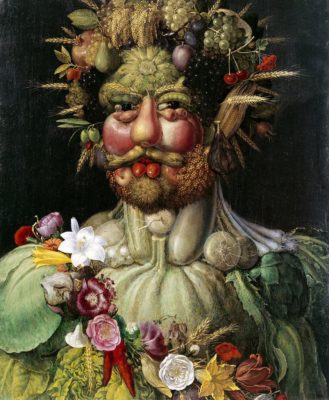 A further painting by the intensely religious and spiritual Evelyn De Morgan portrays her assertion that our mortal lives are but a transient interlude on our journey to the afterlife. The Cadence of Autumn depicts the four seasons as the stages of life and uses autumn, when the abundant summer fruit and vegetables will inevitably submit to the process of slow decay, as a metaphor for her stage of life. However, the painting coincided with Evelyn’s strong commitment to the pacifist movement and her opposition to the Boer War in particular. There is also a suggestion that the painting is also a commentary of the futility of war – as useless as trying to hold back the march of time.

The Cadence of Autumn by Evelyn De Morgan