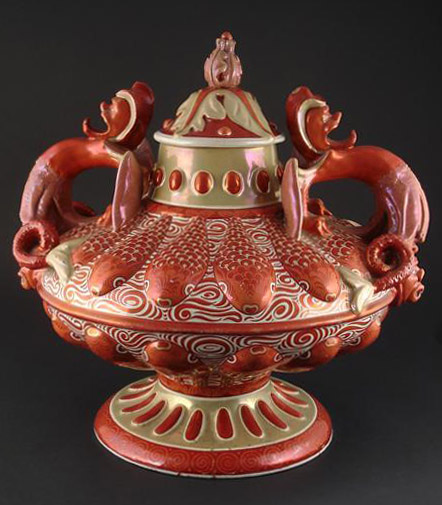 
A large William De Morgan jar and cover by Fred Passenger, moulded in relief with bands of stylised scaly fish, the two handles modelled as winged grotesques each with twin scrolled fish tails, in ruby and copper lustre, the cover modelled with foliage. The pot has no date marks, however it is initialled “FP” for Fred Passenger. So called the Livadia Jar because of attributions in the Gaunt / Clayton Stamm book to two similar pots (now in the Cecil Higgins Collection, Bedford – impress mark L, 1888- 1897 (according to the Cecil Higgins Catalogue C1196 is dated specifically as 1894). The De Morgan Foundations jar is the larger and most elaborate of the three pieces (see images for C1196).
In the caption to the illustration in GCS, Clayton Stamm states These pots were made for the Tsar of Russias newly constructed white limestone summer palace on the Black Sea (designed 1894, completed 1911) but were never delivered. This comment is quite circumstantial, although it is true that the original 1860s Livadia palace was entirely rebuilt in the early twentieth century, and completed in 1911. New furnishings would have been required , however, research suggests that planning for the new palace did not start until 1904, which puts the project outside the early Fulham period. What made Clayton Stamm and William Gaunt assert that the Cecil Higgins Jars were connected with the palace is unknown. However, the pots had been sold by Clayton Stamm to Charles Handley-Read (prior to being bought by the Cecil Higgins Museum) and it is entirely possible that Clayton Stamm invented the story (based on the fact that De Morgan had designed tile panels for the Livadia yacht) in order to inflate the value and importance of the pieces.
Stylistically the three so called Livadia vases are unlike anything else made by De Morgan. The pots have a specifically Mannerist character (Florence was a stronghold of Mannerism in the sixteenth century). In the backward reclining figures of the pots handles one might see echoes of the figures on Michelangelos Medici tombs, or those on Cellinis famous salt cellar, whose marine theme is shared by these pots  the handle figures for example are basically tritons, the mermen sons of Neptune in ancient myth. With its striking decoration of fish in relief the pot is the most intensely maritime of the three. If there is a connection with the seaside resort of Livadia (or indeed the yacht) then this would make sense. However, from 1892 onwards De Morgan began spending his winters in Florence (and also working with Italian craftsmen both in Florence and in London) and so the pots strong Italianate feel could equally be inspired by his extended stays on the Continent and by the 15th and 16th Century Italian maiolica work from centres such as Doruta, Gubbio, Faenza , collected by the South Kensington Museum.
It is the opinion of Jon Catleugh that it is wrong to perpetuate the fiction that any of these three vases are in any way connected with the Livadia Palace.