Evelyn De Morgan (1855 – 1919) was a staunch opponent of war who said, notably ‘you must never praise war.  The Devil invented it, and you can have no conception of its horrors.’

Evelyn De Morgan painted in oil, and her works could be classified as Symbolist as she predominantly utilised symbolism and allegory in her work.  The symbolism in her paintings derived predominantly from classical mythology.  De Morgan used this symbolism to convey both her pacifistic ideals and to portray the horrors of war.  She believed that art served both a social and moral function.  In De Morgan’s allegorical works the predominant themes were spirituality, love, peace and redemption, as well as melancholy and disturbance. 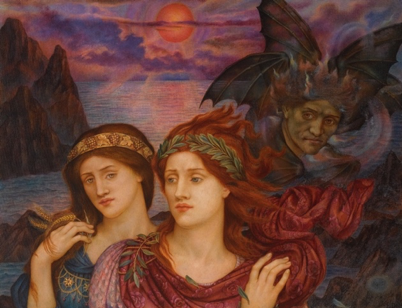 The Vision, (1914) is an allegory of the First World War.  It depicts two women in the foreground, as the personification of Peace and Purity taken from classical mythology.  Peace is on the right, indicated by the olive wreath in her hair.  The menacing demon behind them personifies war and destruction.  Furthermore, De Morgan hints at war’s destruction as the demon creates gusts of wind, dislodging some of the olive leaves from the head of Peace.  However, in the background we see a sunrise, parting the clouds and calm seas, suggesting optimism and the promise of peace.

Moreover, De Morgan’s anti-war paintings also contained apocalyptic scenes, such as in The Coming of Peace, ( c. 1914 – 18).  Sadly, this painting was destroyed in 1991, but below is her compositional study for this painting. 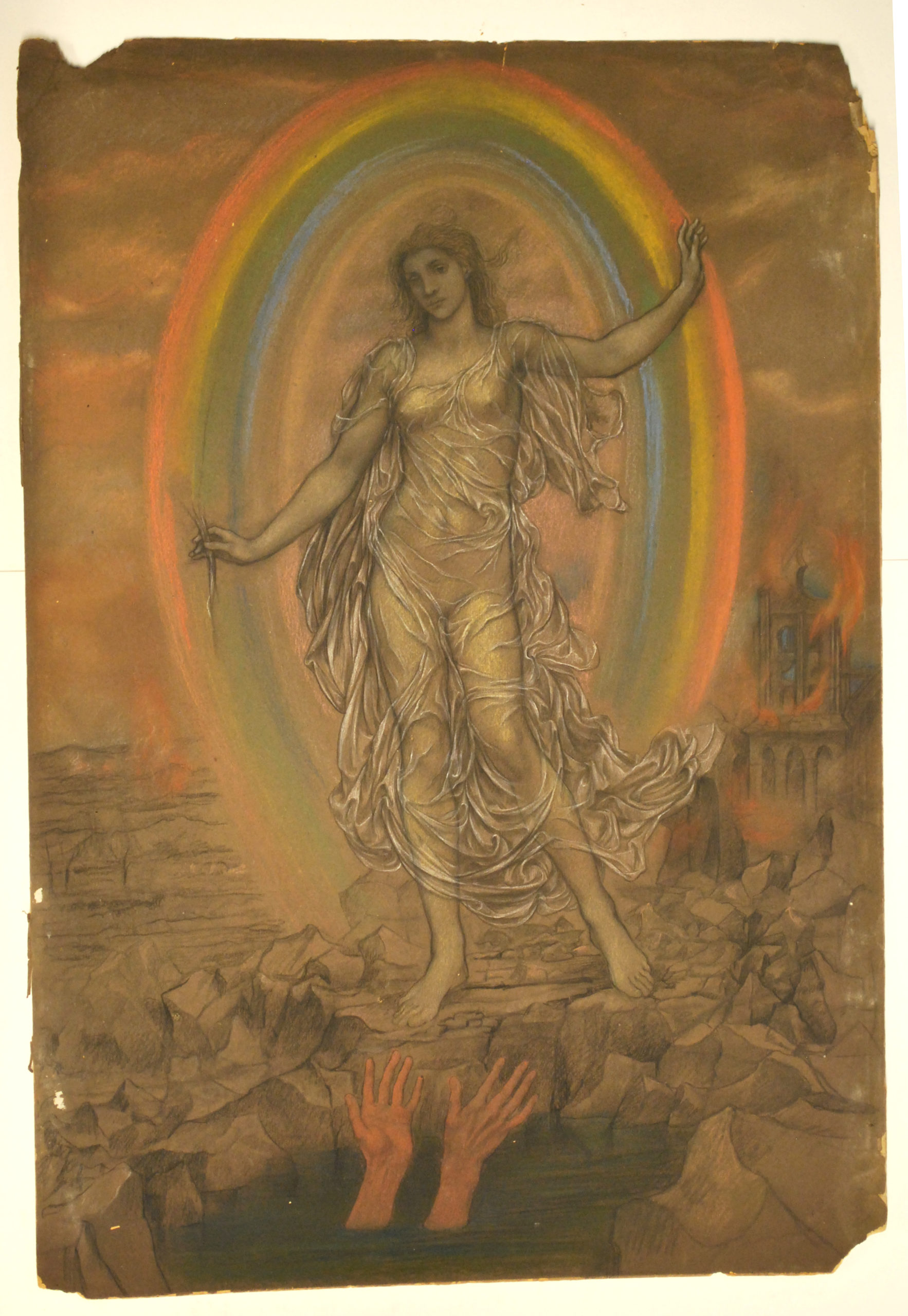 Although this is a scene of horror and destruction; a decimated city with fire raging in the background, it carries an overwhelming sentiment of redemption and resurrection.  The scene suggests that the conflict is drawing to a close through the figure of Peace, who is crowned with a laurel wreath, and who carries an olive branch.  She is surrounded by a rainbow, a symbol of hope.  Peace is standing at the edge of an abyss, where a pair of bloody hands clamour towards her, as if she is their saviour.  Again, De Morgan’s pacifistic standpoint is quite clear, as is the influence of the Pre-Raphaelite Brotherhood.  De Morgan depicts Peace looking out from the canvas.

The aforementioned paintings and the Death of the Dragon (c.1916 – 19) below are all noticeably devoid of jingoism or false patriotism.  The Death of the Dragon was painted toward the end for the First World War.  It portrays the apocalyptic confrontation between good and evil. An angelic spirit descends from the heaven to defeat evil, which is in the form of dragons.  This imagery is taken from the Book of Revelations.  Damned souls are cast into the fiery pit while others move away from the precipitous edge of the abyss, towards the fire. On the right hand side, a woman dressed in yellow is painfully climbing up to the angel and the light. Her eyes are fixated on the light, her shackles are broken and her departing dragon makes a backward glance at the angelic spirit who defeated him.  Despite the scene of devastation, the forces of good have overcome those of evil, and peace has prevailed.  Peace was such a dominant theme in De Morgan’s paintings, and they truly attest to her belief that peace was the solution to resolving conflict, not war and aggression. 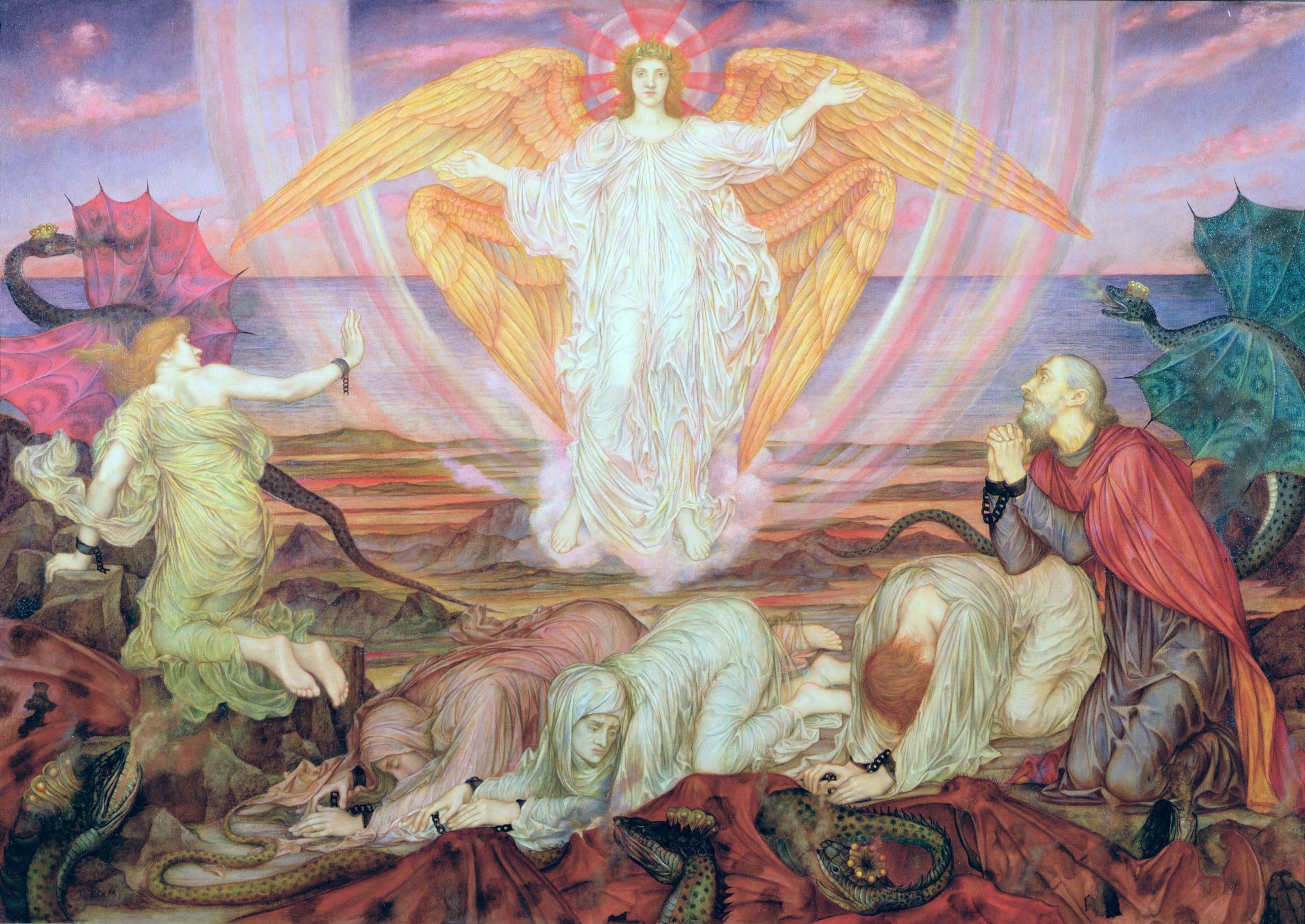 De Morgan’s lack of jingoism and the importance of peace is even more apparent when a comparison is drawn between her paintings and the British War Movement’s pro-war propaganda.  For example, see the ‘Britain Needs You at Once’ poster below.   It contains similar iconography to De Morgan, the dragon.  However, in this instance, Saint George is slaying the dragon, and this image is being used to promote war, national patriotism, heroism and it encourages men to fight for their country. 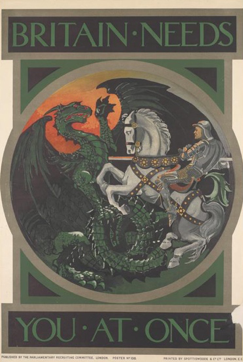