The Tale of Three Museums

Now that the De Morgan Foundation has been able reopen all of its exhibitions and galleries at its three partner museums, Curator Sarah Hardy takes a closer look at the history of these three sites and how De Morgan ties them all together.

In 2018, I was invited to view a Double Portrait by Evelyn De Morgan at Christie’s. It was about to be sold by its second ever owner in their December sale. I had seen references to this portrait and so had always known of its existence, but had never seen an image. A hand-written record of Evelyn De Morgan’s contribution to the Grosvenor Gallery exhibitions in the De Morgan Foundation’s archive revealed that this portrait was entered into the 1887 exhibition. Some years later, it was included in De Morgan’s solo show at Wolverhampton Art Gallery in 1907. Records at Wolverhampton Archive reveal that it was lent to this exhibition by Sir Walter Spencer Stanhope of Cannon Hall, Barnsley, De Morgan’s uncle, and it transpired, the sitters’ father.

Until I was able to see this beautiful portrait first-hand, the only clue to the sitter’s identity was the entry into the Grosvenor Gallery which listed the picture as being of Mildred and Freda Stanhope. A plaque on the front of the frame revealed much more, however, as each sitter is named in full. This portrait was of De Morgan’s first cousins Alice Mildred and Winifred Julia Spencer Stanhope, two of Sir Walter’s 15 children.

The picture is absolutely spectacular. The two young sisters stare out of the frame, dressed in identical red smocks, with unmistakable pudding bowl haircuts and rosy pink cheeks. There is a certain serenity about them for such small children, suggesting the intimacy and loving relationship between artist and sitters. Indeed, the picture was painted in 1884, a year when De Morgan had spent much time at her family seat in Yorkshire, working with her uncle, Pre-Raphaelite artist John Roddam Spencer-Stanhope to contribute gold organ panels, depicting angels with the attributes of the four gospels, to the redecoration of the local church in Cawthorne which the Spencer Stanhope family had paid for and instructed the Arts and Crafts architect, G. F. Bodley to complete.

De Morgan has ensured that subtle reference is made to her beloved ancestral home in the portrait, by including Cannon Hall’s iconic and prize-winning rhododendron bushes as the deep green foliage background to the two young sitters. This deeply personal painting was so special as it situated De Morgan in Barnsley and deepened the connection between De Morgan Foundation and Cannon Hall, which has been a museum since the 1950s and is today home to the De Morgan exhibition ‘A Family of Artists’ which explores this connection in more depth. The artwork was clearly treasured by the family, remaining with them until the 1960s when it was purchased by those selling it in 2018.

Although the De Morgan Foundation would have been delighted to acquire the picture, its beauty ensured it was a hit in the sale room and the hammer price was five times the estimate and sadly well beyond De Morgan’s budget.

However, there was more to this portrait than I could ever have known from archival records of its exhibition history. Winifred Spencer Stanhope, one of the sitters in the painting, had grown up to be an artist herself and had spent her life documenting her family gatherings. She had made two photograph scrapbooks of Christmases and Easters at Cannon Hall, holidays to other country homes, and even her travels in Italy all of which she had beautifully illustrated with fairy folk and monsters. These scrapbooks were not to be for sale, rather they were going to be a generous gift from the vendor to a suitable public institution. There was no doubt in my mind they should belong at Cannon Hall and I immediately, very gratefully accepted such a brilliant gift to our museums. 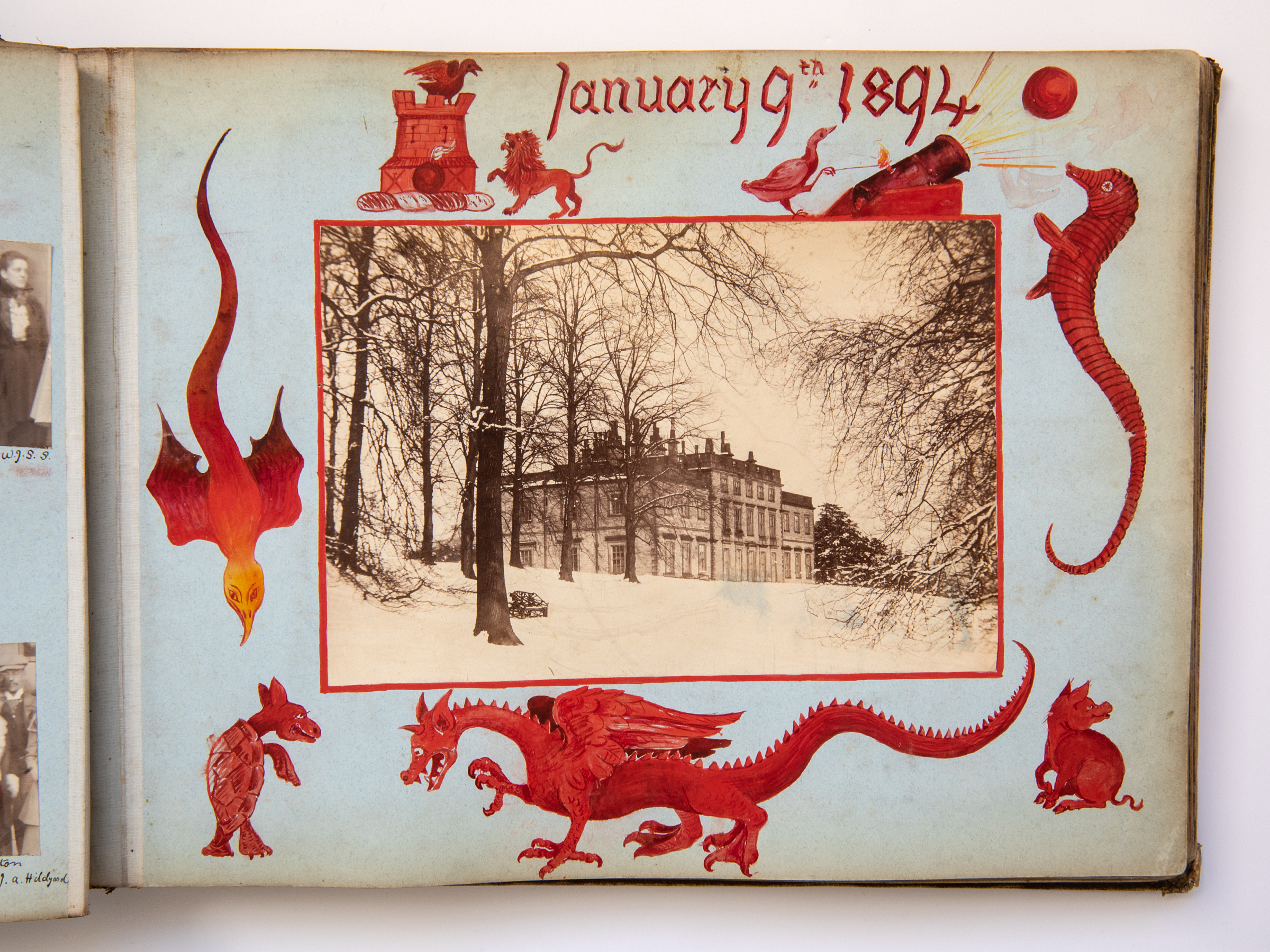 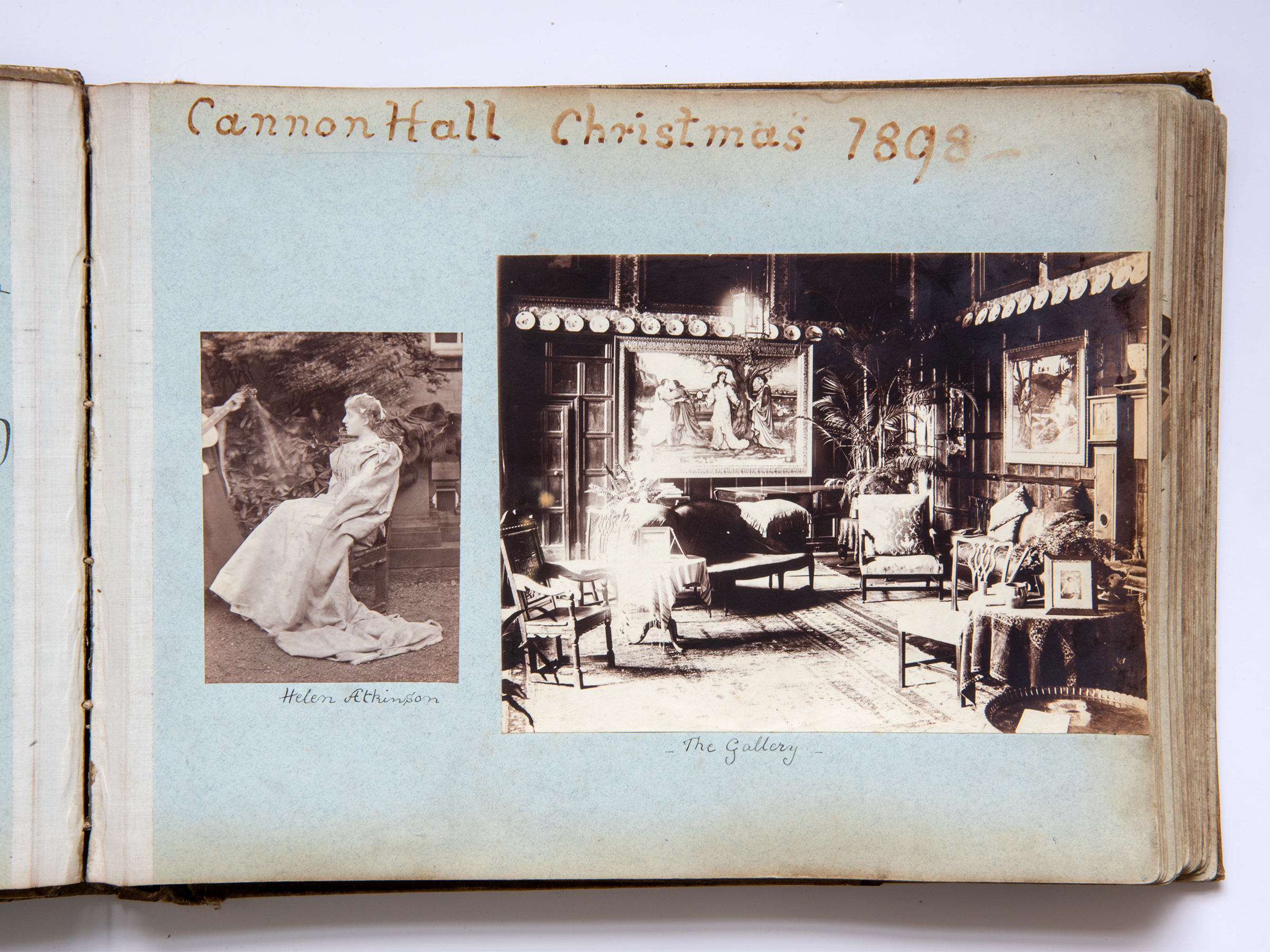 More excitingly though, the albums revealed decorative schemes and hangs of artworks at Cannon Hall which we had never know existed. One page in particular was very revealing, as it showed a second picture De Morgan had created for her uncle Sir Walter, alongside a Spencer Stanhope painting Love of a Bygone Day. This aesthetic picture shows two women in medieval dress, playing music to each other whilst languishing in grounds very similar to Cannon Hall’s. This photograph immediately jumped out at me, because this was a painting I recognised. Not because it was still in the collection at Cannon Hall, but because it was on display at Wightwick Manor, a National Trust Property in Wolverhampton which the De Morgan Foundation also partners with. The pictured had been acquired from a relative of De Morgan’s in 1966 by the National Trust and now sits very comfortably at Wightwick with their wonderful Victorian collection. 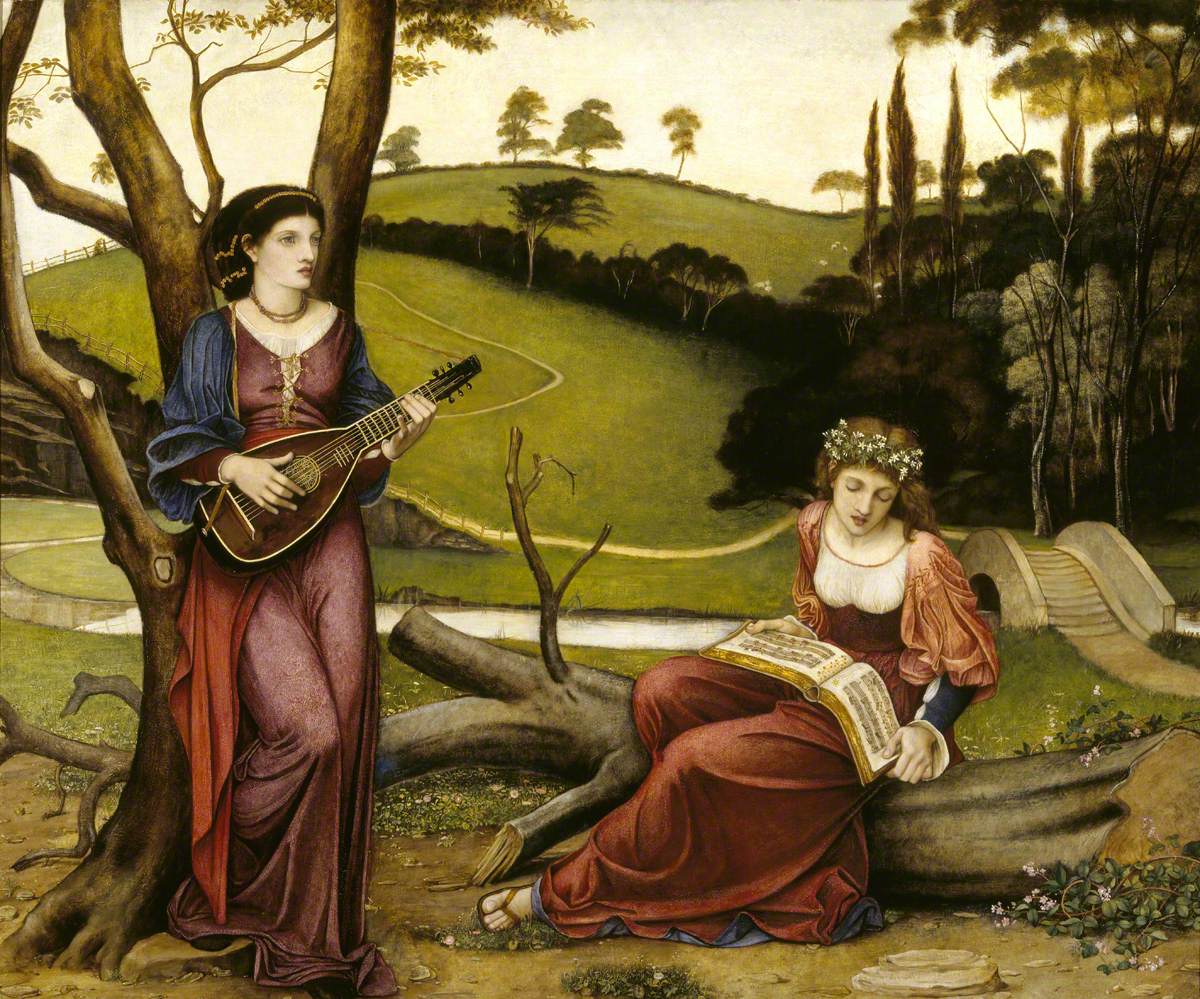 Further research into the collection at Wightwick revealed a painting by Winifred Spencer Stanhope of her sister Gertrude, who was a notable sculptor. This really cemented the link between the De Morgan museums in Barnsley and Wolverhampton. 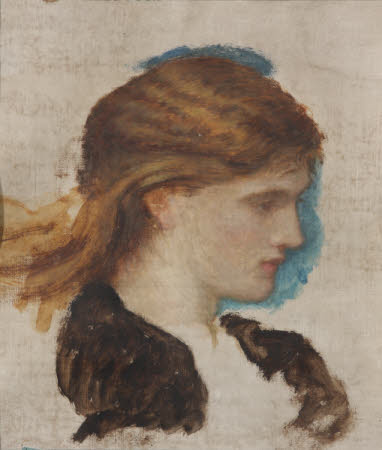 Oil painting on canvas, Gertrude Spencer Stanhope (1857-1944) by Winifred (Wilfreda) Julia Spencer Stanhope (b. Barnsley c.1873 – 1964) circa 1887-90. An unfinished painting of a head-and-shoulders portrait of a young woman, sister of the artist, in profile to right, with hair in a bun wearing white shirt and black jacket. Wilfreda and her older sister Gertrude were both painters. Wilfreda was also a sculptor. She exhibited at the Grosvenor and New Galleries and the Royal Society of British Artists between 1885 and 1899. Gertrude exhibited between 1886 and 1909. They were nieces of the Pre-Raphaelite artist John Roddam Spencer Stanhope, a friend of Rossetti and Burne-Jones, and often worked at his home the Villa Nutti near Florence. They were also cousins of the painter Evelyn Pickering, better known as Evelyn De Morgan.

John Roddam Spencer Stanhope was the uncle and tutor to all of his artist nieces. Winifred’s time spent in Italy at his Villa Nuti near Florence is clearly documented in her scrapbooks. Roddam himself had a generous tutor, with whom he would travel to Italy to learn the craft of painting, and perhaps this is why he was so encouraging of his nieces. His tutor, of course, was G.F. Watts, a brilliantly well-respected artist of his time. Roddam had been so enamored with Watts’ work that he sought him out as a tutor whilst still a student at Oxford. Clearly something in Roddam endeared him to Watts, as he became one of only two pupils Watts ever took on.

Today, Music of a Bygone Day hangs just around the corner from Watts’ magnificent Portrait of Jane ‘Jeanie’ Elizabeth Hughes, Mrs Nassau John Senior (1828-1877) at Wightwick Manor. In addition, the third partner gallery of the De Morgan Foundation is the Watts Gallery in Surrey, a place that Roddam and Evelyn De Morgan knew well. Once Roddam had left his home in Barnsley, he was embraced by the Holland Park Circle that had formed in London around Watts, through which he met the designer Philip Webb who had recently completed Morris’ Red House in Bexley. Roddam instructed Webb to build Sandroyd, Roddam’s home in Surrey, a stone’s throw from Watts country seat of Limnerslease in Compton, where the Watts Gallery is today. 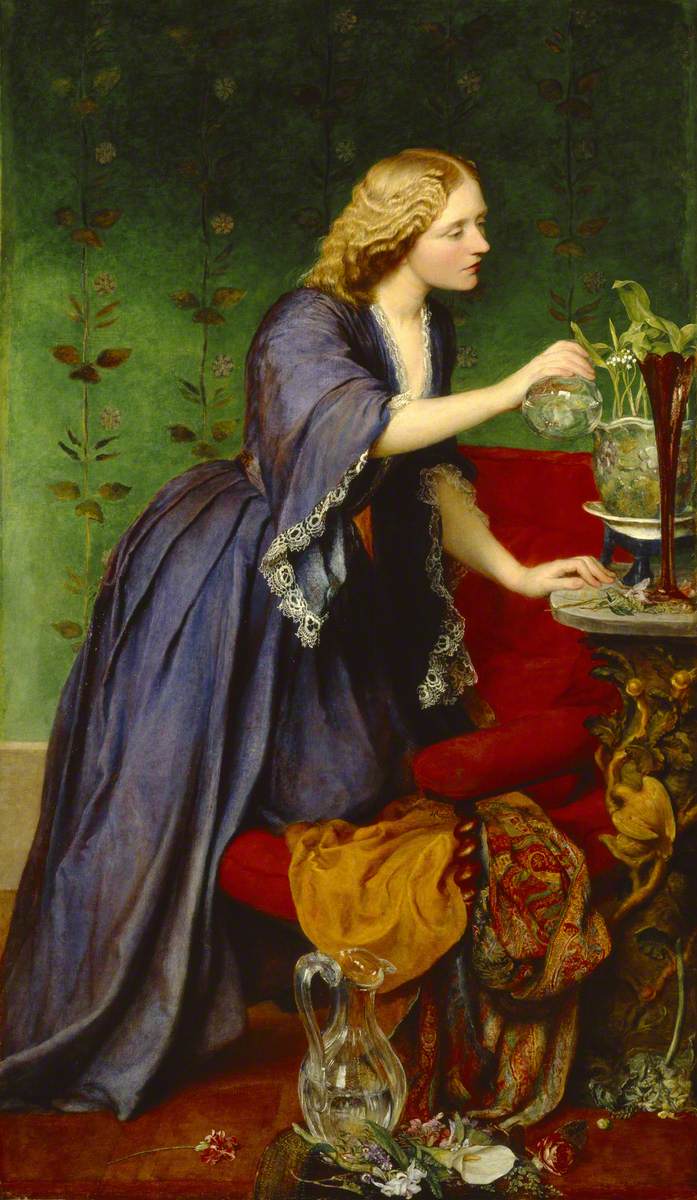 The rediscovery of the De Morgan Double Portrait and the gift of Winifred Spencer Stanhope’s scrapbooks to Cannon Hall has been transformative for our understanding of this artistic family and has really helped us to celebrate the historic connections between the museums the De Morgan Foundation calls home today.