The Representation of the City in Art

The Victorian era was one of considerable and impactful change.  Industrialisation powered the expansion of cities predominantly through rural to urban migration, leading to accelerated urban growth and in turn, to urbanisation.  This urbanisation, resulted in quickly built mass-housing in the form of terraced cottages for the poor, many of whom lived in slum conditions and in poverty.

Many artists in this era responded to the changing world around them, ‘they proffered their skills to help change the world’ (Edwards, 2012, p.73), believing that art had a social responsibility.  Simultaneously, this period saw a change in the visual language used by artists.  There was a move away from traditional and academic modes of expression, such as the classical ideal, as it ‘was becoming less convincing.’ (Edwards, 2012, p.1).  This rejection in the 1850s of the classical ideal, led to the development of genre painting and a focus towards realism.  Genre painting reflected what was happening there and then, in the urban situation, rather than of ancient Rome or Greece.  Genre painting and realism enabled the artist to critique western society’s cultural and social values, whilst challenging bourgeoise morality.  Their artworks depicted the changing way of life and the environment, the slum conditions and the consequences of poverty, a bleak vision of urban alienation; predominantly addressing social and political issues, with their target audience being the middle classes.

One such example of genre painting is the Irish painter, John O’ Connor’s (1830 – 1889) From Pentonville Road Looking West, 1884 depicting London in the evening.

The painting depicts London realistically, without beautification, and without hiding the harsh reality of urban life.  On the right-hand side of the work is a grime covered building, its roof littered with rubbish.  Smog dominates the skyline and there is a pervading and unpleasant aura of uncleanliness.  It is typical of genre painting in its depiction of ordinary people doing everyday things, for example, walking on the pavement, using public transport and so forth.

Another form of representation of the city was through narrative paintings, depicting everyday life, which offered social commentary on the ills of city life, and had a clear moral narrative, such as John Henry Henshall’s painting (1856 – 1928) The Public Bar, (1883). 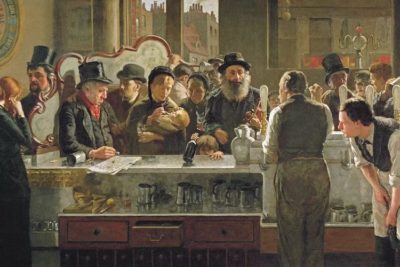 This is an extremely descriptive painting. Its intention is to traduce emotions and it is ‘crammed with dramatic incidents that have a clear moral value.’ (Edwards, 2012, p,59).  Additionally, it alludes to the difficulties and hardships people face, and the trappings of modern life.  It depicts an English pub scene; the centre of the painting is a bar with bar workers and customers, and the bar acts as a divide between staff and patrons.  As a viewer, you feel that you could be there, but you are at a safe distance from the bar, and the events unfolding within it.  The baby is at the centre of the painting both morally and compositionally.  The baby is being fed gin as a pacifier, ‘clearly not an ideal vision of motherhood.’ (Edwards, 2012, p.59).  A respectable young man, rescues his father, who appears to be drunk.  To the left there is a decorative glass screen – an area of seduction with a young man and woman deep in conversation, and ‘the presence of a young woman in this type of establishment would almost certainly point to ‘vice’. (Edwards, 2012, p.57).  This suggests financial desperation, her need to turn to prostitution to survive.  Through the windows there is a view of the pawnbroker’s shop, alluding to the city’s poverty and the implication that drink leads to personal ruin.

Another means of representing the city was through the use of the river as a symbol of the city’s potential for good and evil.  One such example, is G.F. Watts (1817 – 1904) painting Found Drowned, c.1850. 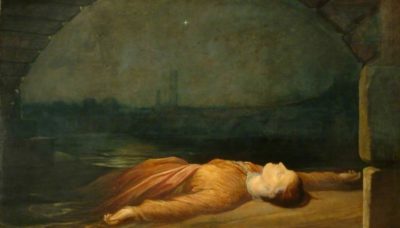 This painting depicts the dead body of a woman, most likely unmarried and pregnant, washed up beneath the arch of Waterloo Bridge.  Her lower half is still immersed in the murky and dirty water of the River Thames.  In the same way as O’Connor, Watts includes the smog, in this instance reducing the industrial cityscape in the background to almost no visibility.  This painting on the one hand alludes to both the dirtiness of the city and to the dangers that women faced, and like Henshall’s painting, it alludes to their vulnerability in the city.