The Enchanted Interior is a brilliant new exhibition at the Laing Art Gallery in Newcastle, which explores how artists have used domestic spaces as a motif through which to express ideas of femininity, from the mid-19th century to the present day.

The first section of the show demonstrates that the concept femininity does not exist exclusively of class or culture. This was particularly true in the mid-19th century where industrialisation had polarised the classes and the spheres of middle-class and lower-class women were drawing ever further apart and, whilst the perils of the lower classes were well documented, the entrapment and subsequent suffering of wealthy women in was invisible. Female artists took back the domestic space and used it to fill canvases that would eventually hang in male-dominated art galleries. In these paintings, they would exhibit the perils of women, usually hidden behind closed door. Evelyn De Morgan’s painting The Gilded Cage, which lends its title to the opening room of the exhibition, depicts a wealthy couple in a marriage of convenience. The young woman is shackled by expensive bangles and looks longingly out of the window towards the freedom she longs for. In the top right of the painting is a canary, locked in golden cage, reinforcing the theme of entrapment. This painting is hung alongside delicate watercolours by Frederick Lewis which depict opulent interiors of the Middle East, filled with carpets, tapestries, and trellises behind which women hide. 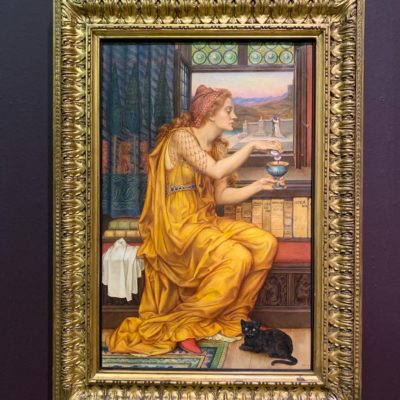 Due to the domestic space traditionally being a space for women, it is one that was shrouded in mystery and suspicion. Evelyn De Morgan tackles this in her picture The Love Potion. Symbols such as the wide-eyed black cat and vials of bubbling liquid lead us to think the woman in the painting is a witch. Look closer though, and you notice the library of classic texts and the brave lions on the tapestry, showing that actually, this is a learned scholar, rather than a woman to be feared. In the final room of the exhibition where this picture hangs, is a stunning Cornelia Parker piece. A silver gravy boat hangs next to flattened one, which forces the view to readjust their view of and association with the domestic space, just as Evelyn De Morgan did over a century earlier.

Other artists such as Edward Burne-Jones, Dorothea Tanning, and William Holman Hunt join the line up in this stunning exhibition which completely reframes the domestic space and the conception of women in it. It is open until 22 February 2020 and you can find out more here: https://laingartgallery.org.uk/whats-on/the-enchanted-interior