The De Morgans and WWI by Dr Richenda Roberts 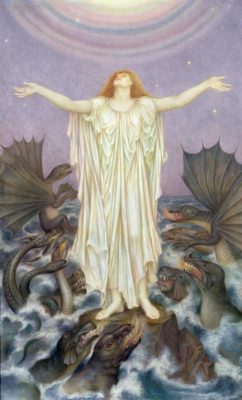 In 1901 Evelyn De Morgan (1855-1919) began to produce paintings on the subject of war. By the time of her death on 2 May 1919 she had created at least seventeen finished paintings and many for more preliminary sketches, which allude critically to the effects of both the Second Anglo-Boer War (1899-1902) and World War One (1914-18). To mark the centenary of the Armistice of the First World War on 11 November 2018, the Watts Gallery hosted a lively talk and questions session about Evelyn’s war art. Focusing on some key examples, such as S.O.S. and The Red Cross, during the talk, Dr Richenda Roberts from the University of Warwick, argued that in Evelyn’s artworks the topic of war is alluded to through a series of allegories, cultural signification or even by its absence, thereby communicating the artist’s egalitarian and pacifist beliefs in a period of cultural and political uncertainty.

Thank you to Richenda, as ever, for giving talks on the Evelyn De Morgan’s artwork to our visitors.

Find out more about visiting the display