We asked aspiring artist Vian Kolhussein to create paintings in response to Evelyn De Morgan’s paintings of the First World War. She created a beautiful body of work which reflects on her own experience of fleeing war in her home of Syria. The parallels of her own career with De Morgan’s can be seen in their views on feminism and their first public exhibition of works at the age of 22. 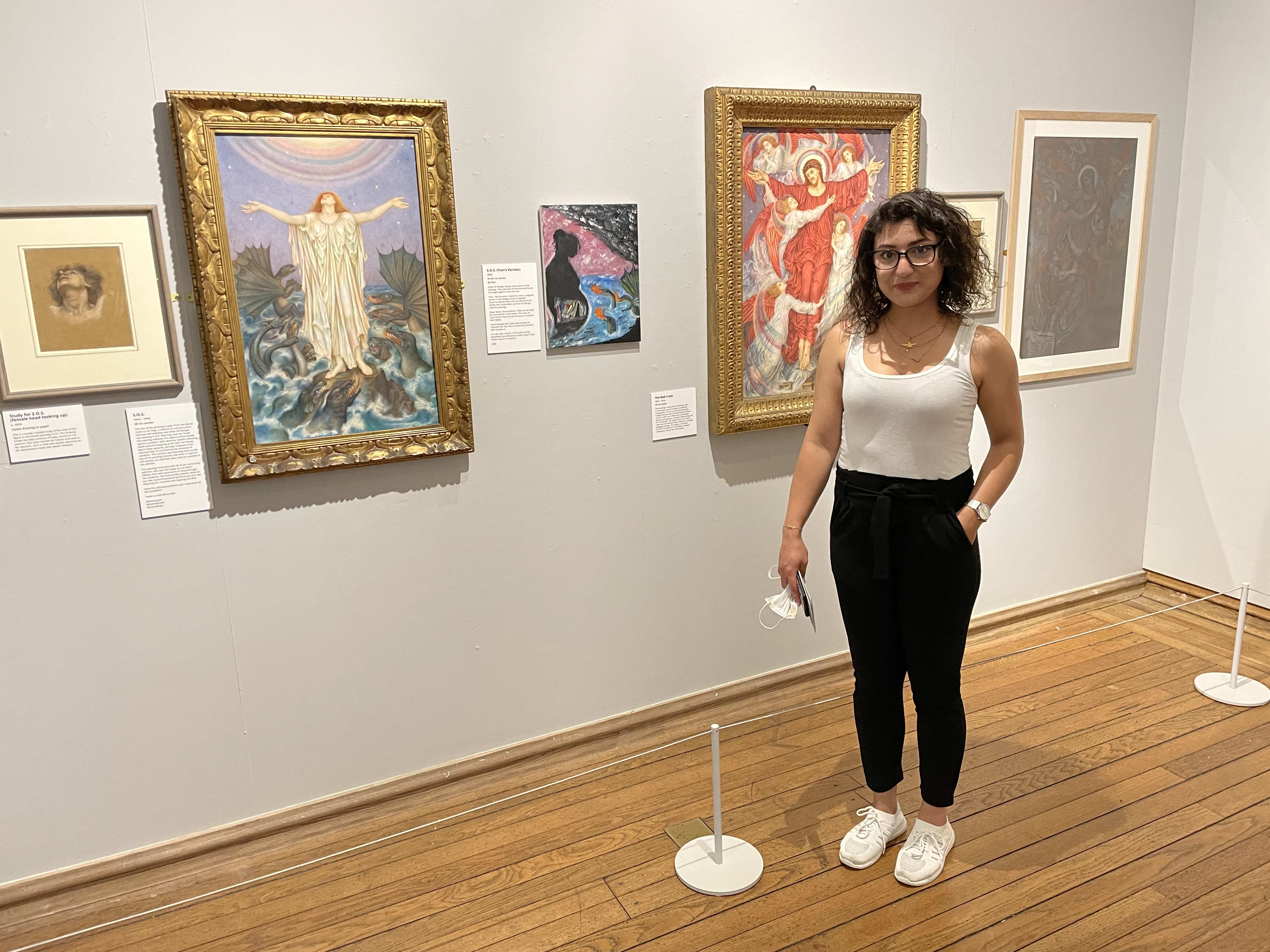 Hope is all what we need to innovate and carry on in life as peace is all we are looking for. And this is what the De Morgan exhibition did in my life recently.

My name is Vian and I’m 22 years old and I’m orginally from Syria, I have been in the UK for a year and a half. I moved here as refugee from Lebanon as I was so lucky to be chosen among 2 million refugees, I started to plan for my new life here as it was not easy at all, I’m studying Art and Design course at the college and looking forward to university. I wanted my art to participate in the exhibition to convey what it means to be a refugee without a country without an identity, and the suffering that refugees face in getting to a safe spot where there is no conflict, also I tried to shed light on feminism and their struggles that were multiple. Other people declare their solidarity with the refugees through writing, photography, etc. As for me, it was through my brush.

The chance to participate in the exhibition by Sarah Hardy made me look at life in another way through De Morgan’s paintings. Where I was inspired by her paintings of peace, feminism and the spiritual relationship with God, In my paintings, De Morgan inspired me in the woman’s relationship in society with the evil surrounding her in the society where war, poverty and motherhood, as she inspired me in her paintings about peace, which made me think about drawing my paintings in a different way. 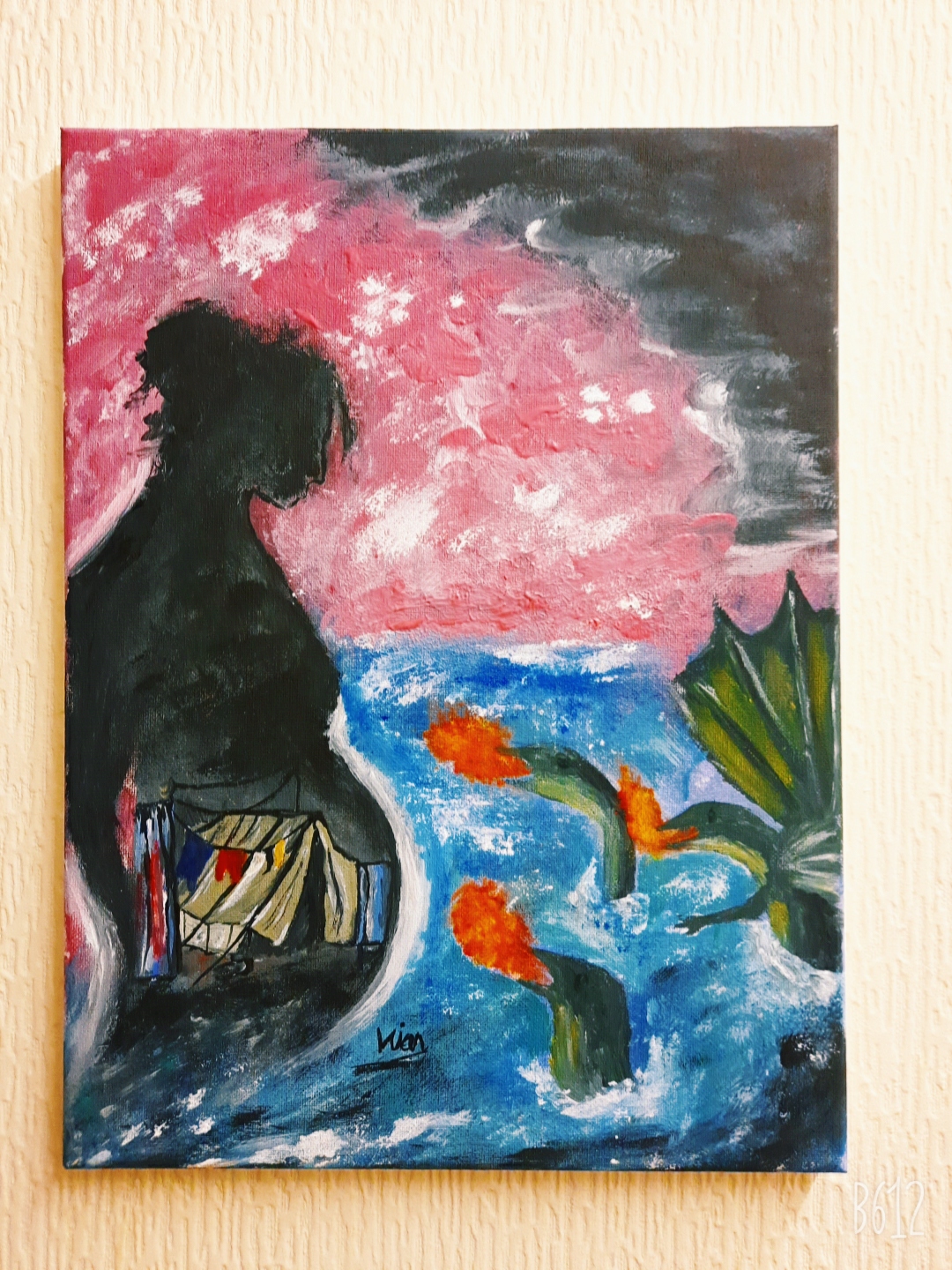 Evelyn De Morgan always used a woman in her paintings. They represent her feminism and issues she fought against in her own time.

In SOS Vian’s Version, I did the same. I wanted to show a pregnant woman in the refugee camps to highlight issues for women which are not addressed and people don’t know about. Just how De Morgan used her paintings.

Rape. Abuse. Sexual violence. These can be faced by many women in the camps. Their lives are much harder than the men as they try to protect their babies. Like De Morgan did, I have used monsters to represent the men. This is to show how demonic their situation is.

My displacement from my country at the age of eleven to another country was a suffering in itself, as I lost my education and my home. I tried to start my life over when I had the opportunity to come to the United Kingdom, which changed my life, and in my paintings, I tried to integrate my experience of displacement and literally losing everything just because of a hope that I did not lose inside me.

Hope remains the only incentive within us that can change our lives upside down at a moment in a somewhere as long as we have always believed in. 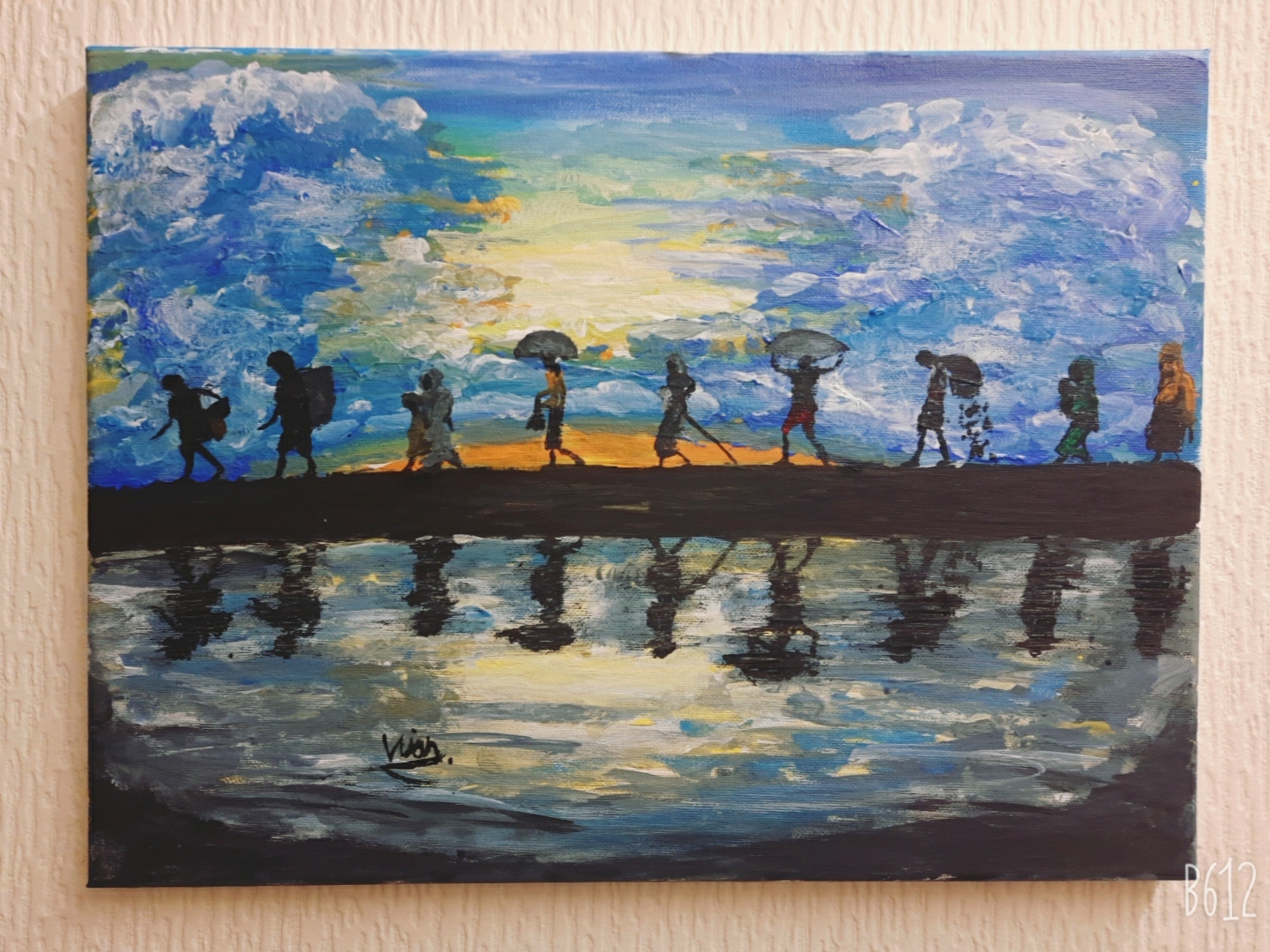 This painting is called Journey.

It’s only the beginning and end story of refugees that is ever told. We hear of a war in Syria. We hear of camps in Calais. But these people have had to travel thousands of miles to flee that war. On foot. On the sea. With their babies and possessions on their backs.

This painting shows people on the move. Silhouetted against the sunrise they look beautiful and you almost forget their terrible fate.

Like Evelyn De Morgan used the sunrise in her pictures to represent hope, this painting also includes that motif. It represents my new life in the UK.