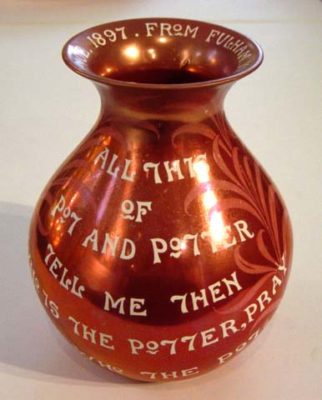 This charming pot was sent from William De Morgan’s pottery at Sands End in Fulham to William who was in Florence for a Christmas gift in 1897.

Since 1890, William and Evelyn De Morgan spent winters in Florence in order to escape the cold of London. By this time, William’s pottery business had moved to Sands End and he had many staff who worked there, creating ceramics to his specification. His letters to his staff and business partner, Halsey Ricardo, at this time reveal his frustrations at not being able to oversee all of the work in person.

This drawing, in the V&A’s collection, is one of many that William De Morgan sent back to Fulham from Florence with instructions on how best to 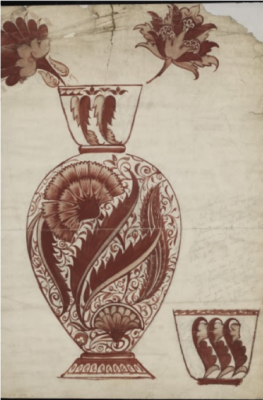 create this vase to his specification. His instructions to his workers appear to give them great freedom asking them to use their own discretion in the design in choosing an alternative flower head. But this is not so generous, as he provides just two alternatives to choose from!

De Morgan was a notoriously generous spirit. In a letter in about 1890, to his business manager at the Sands End pottery, Reginald Blunt, William describes his moral objections to stopping a worker’s pay whilst he is off work with a broken ankle. Statutory sick pay wasn’t introduced until 1983, putting William about 100 years ahead with his liberal ideas.

It is not a surprise that William’s workers elected to send him a Christmas gift, therefore, and this charming pot was surely well received. The inscription on the pot seems to suggest that William’s workforce knew how particular he was over his ceramic designs and reads almost like it is their good-natured way of telling him not to worry whilst he is abroad.

The verse reads: “All this of Pot and Potter – Tell me then, Who is the Potter, pray, and who the Pot”

William’s passion for his craft meant that his ceramic designs and creations were like an extension of himself. He was famously a terrible businessman, one claiming he knew ‘a great many quarters who might invest in De Morgan and Co. if De Morgan could be kept in an aesthetic pound and not allowed to meddle with the ledgers’. To William, the pursuit of perfection in ceramics and his lustreware was more important that making a huge profit and this verse also resonates with this side of his personality.

The verse is in fact taken from the poet Edward Fitzgerald’s 1859 translation of the Rubáiyát of Omar Khayyám (1048–1131). Fitzgerald was a Cambridge scholar who had taught himself to read Persian and work on translating ancient texts. His initial publication of the great work of the medieval astronomer poet was largely ignored until Rossetti became interested in it and it was soon a great literary source for the Pre-Raphaelites, allowing them a romantic view of Persia and a gateway to explore exotic imagery.

The verse regarding the potter which adorns William’s vase is a metaphor for the creation of myths. Much like a myth which is told and retold over the centuries, the pot is only ever a construction by those who construct it so where the potter ends and the pot begins is a matter for debate. William clearly regarded this gift very highly and would have been amused by the sentiment. He returned to London with it where it remained at home with him until his death in 1917. 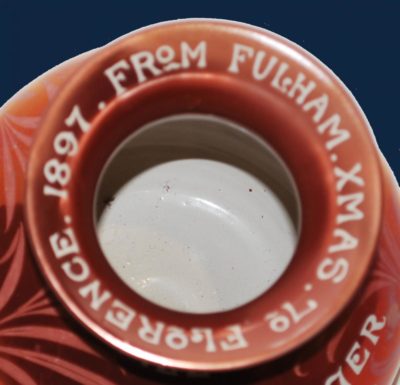 The full poem is excellent and worth reading at length, but the stanzas regarding the potter are reproduced here.

As under cover of departing Day

Once more within the Potter’s house alone

I stood, surrounded by the Shapes of Clay.

Shapes of all Sorts and Sizes, great and small,

That stood along the floor and by the wall;

And some loquacious Vessels were; and some

Said one among them – “Surely not in vain

My substance of the common Earth was ta’en

And to this Figure molded, to be broke,

Or trampled back to shapeless Earth again.”

Then said a Second –”Ne’er a peevish Boy

Would break the Bowl from which he drank in joy;

And He that with his hand the Vessel made

Will surely not in after Wrath destroy.”

After a momentary silence spake

Some Vessel of a more ungainly Make

“They sneer at me for leaning all awry:

What! did the hand then of the Potter shake?”

Whereat some one of the loquacious Lot –

“All this of Pot and Potter – Tell me then,

Who is the Potter, pray, and who the Pot?”

“Why,” said another, “Some there are who tell

Of one who threatens he will toss to Hell

The luckless Pots he marr’d in making – Pish!

He’s a Good Fellow, and ’twill all be well.”

My Clay with long Oblivion is gone dry:

But fill me with the old familiar Juice,