Mary Morris, known as May was born on 25 March 1862, died 17th October 1938. She was the youngest daughter of Jane and William Morris who were friends of the De Morgans. After William De Morgan’s death, his wife Evelyn was outraged that most of his obituaries failed to mention his artwork and career as a brilliant ceramicist. They referred to him as an author, the career for which he was best known when he died. In order to redress the balance, Evelyn approached her friend, artist and designer May Morris to write a piece for the Burlington Magazine on William’s life and work. It is a sensitive, heartfelt account of a man she clearly adored. Just two years later, she wrote Evelyn’s obituary for the same publication. Again, her account of the artist demonstrates a respect beyond that of colleague, it allows a glimpse of a personal and lifelong friendship. She recalls spending time with Evelyn in Italy, ‘They were vivid days when we wandered among the spring flowers of the poderi, or lay among the rosemary bushes on the hill-side;’ it really is a touching piece and beautifully written. 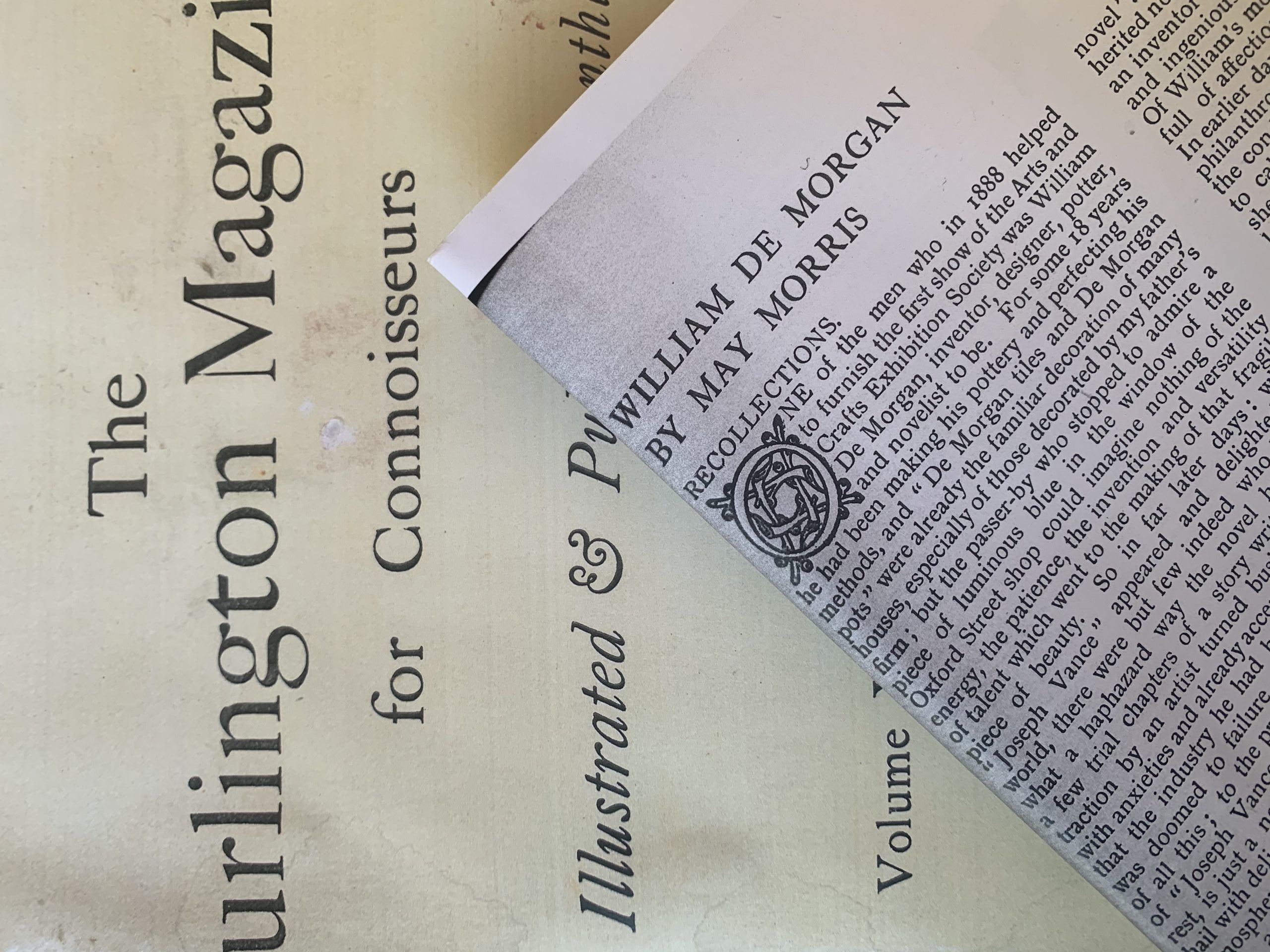 Obituary of William De Morgan by May Morris

May’s love of writing from an early age was recently discovered, her holiday journal, in which she wrote when she was just eight years old can be viewed at William’s childhood home in London, now the William Morris Gallery. The little journal was written for the benefit of her mother, although she gave a description of herself in case it fell into the hands of someone that did not know her. ‘I am very untidy and always very dirty and sometimes I am ashamed to say very naughty’ I feel that this quote from her journal perfectly describes her personality.

She had a relationship with George Bernard-Shaw, sending him a hand painted valentine in 1886, which he noted in his diary as receiving a handsome valentine.

The Valentine card drawn by May Morris and sent to George Bernard Shaw. Photograph- © British Library Board (Add. MS 50563)

May was only briefly married to the journalist Henry Halliday Spalding, marrying in 1890 and divorcing in 1898. She brought Kelmscott Manor, designed by her father, where she lived with her companion until her death in 1938.

May studied at the Royal College of Art, where she specialized in textile and embroidery. Some of the designs she made included Honeysuckle 1883 and Horn Poppy 1885.  At just 23 she took over her father’s business Morris & Co. embroidery. I love that her work was unique to her and that it had so many variations in design and colour. She often used pastel colours in her designs.

My favourite design that was made by her would be Honeysuckle as it uses a simple colour palette which in turn highlights the great detail that May included in this pattern. I love the illustrative style of the design and although it is in muted tones I can almost smell the sweet scent of honeysuckle. I also feel as the leaves are two toned it makes them appear three dimensional.

May Morris was a feminist and a socialist. She was appalled by the lack of support for female practitioners within the art community. Women weren’t allowed to join the Art Workers Guild, so she set up the Woman’s Guild of Art! I think that is so cool, she was an awesome activist for equal rights. As a child May described herself as a bit of a tomboy, and had a strong personality. Throughout her life she had great skill for the arts, creating embroidery and jewellery. Standing strong against the male dominated art community, creating opportunities for women, which I admire.