The Tiled Reredos in St Peter’s Church,¹  Hornblotton, Somerset has often been referred to as by William De Morgan.  I live hereby and know the church well.  I doubted the attribution but never took it any further until The De Morgan Foundation asked me what I knew of the tiles. 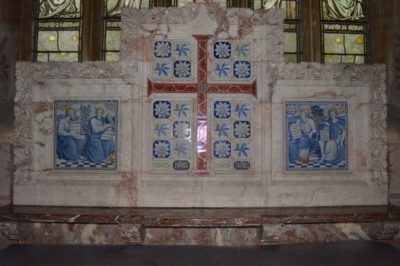 Thus inspired, I investigated the records of the building of the church, 1872-74, kept in the Somerset County Archive.  Among the interesting papers – low and behold – a receipt for £12 from William De Morgan – all doubt cast aside, a wonderful, incriminating, innocent slip of paper, William has received £12 for executing the tile panels.³ 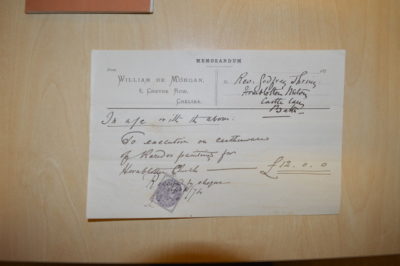 The very beginning of his tile making at Chelsea and not what we are used to seeing – tile panels with the evangelists in landscape, but closer to his stained glass designs and in particular to his painted panels in the Philip Webb cabinet in the William Morris Gallery.²  The flowers and leaves arranged in blocks of four are surely precursors to Morris/De Morgan flower tiles as in rose trellis.  The red cross is probably the most significant feature, copper lustre foliate wave pattern with crinkly edges as found on De Morgan vases.  The tiles are tin glazed, difficult to determine their origin as it is difficult to make a close inspection. What a gem! The church is open daily, do try and visit, a defining moment for William’s tiles – floral patterns, painted figures and copper lustre in a magical Arts and Crafts setting.

¹  By the Arts and Crafts architect T G Jackson and at the behest of the rector, Godfrey Thring and his wife

³  Not that I discovered the receipt, it had already been recorded by Lynn Pearson of TACS.

Following a steep learning curve in the rough and tumble of the London antique markets and a year in Paris exporting art glass to the USA, Richard took a job sweeping up at Sothebys in 1959. He went on to fill a vacancy in the ceramic and glass department under the legendary Jim Kiddell. Richard feels that his most significant contribution during his time at the auction house was to persuade the hierarchy to accept Tiffany and Galle glass for auction.

In 1965 he branched out on his own and embarked on an extended trip to South America selling Edwardian silver, returning with antique French glass paperweights. This gave him the means to open the shop in Kensington Church Street selling antique glass. Gradually Richard’s interest in Victorian ceramics took over and with the first exhibition of Doulton Stoneware in 1971 his catalogues evolved into books which were accompanied by specialised exhibitions.

David Burnham-Smith was the restorer at large who, with great skill, rose to each challenge – for the Parian Exhibition he developed a parian body and modelled little fingers and toes, pinned to the figures. Wherever there was a neglected area of collecting, or a need to publish original research, Richard was eager to fill the void. Some of the eighty-odd Dennis catalogues and books are labours of love for both author and publisher. Some are standard reference books and, inevitably, there were those ‘which got away’. “I was building up to a Clarice Cliff catalogue but was beaten to the post by the Brighton Exhibition. Wrongly I thought, “too late” – how many books on Clarice since then?”

Richard sees each book as a jigsaw of information and illustrations written for the collector, the dealer and the auctioneer. The tradition of Dennis Publications’ comprehensive photography has been continued by his son, Magnus, a professional photographer who, because he is a family member, has been persuaded to balance precariously on ladders, work in freezing factories and, memorably, in rain-sodden Paris. Each book holds special memories: introducing the Martin brothers’ descendants to each other; filling Chelsea Town Hall with parian; discovering that ‘WM’ at the base of a vase stood for William Moorcroft; being astonished by the Burgess and Leigh archive; spending thirty years searching for Moyr Smith tile designs et al.

He has the eye of the collector – recording the different colourways of Rex Whistler’s ‘Clovelly’, or reproducing all known De Morgan designs. The next printing of Poole Pottery will be the fourth, each an updated edition; The Martin Brothers, a fascinating story by Malcolm Haslam, is still in stock after thirty years, much to the frustration of Richard’s accountant!

Encouraging existing British pottery factories and studios is now what interests him most: publicising the importance of conserving the Burgess & Leigh Pottery (England’s last chance to save a working Victorian Pottery); recently publishing Emma Bridgewater, an uplifting story of a thriving pottery, already a collectable; promoting the work of Studio potters such as Maureen Minchin, Amanda Popham, Laurence McGowan who have each had Richard Dennis exhibitions.f

Discovering unappreciated Moorcroft pottery in the 1960s inspired the publication of the first book with Paul Atterbury in 1973, and helping to run Moorcroft Pottery from 1986-92 was a defining period for him, manufacturing pottery for the collectors’ market. He now helps to run Dennis Chinaworks, his wife, Sally Tuffin’s Pottery, utilising their Victorian stables and nurturing talent in rural Somerset – a longheld dream.

What of the future? “More books and more pots!”