Medea is a character from one of my favourite stories, Jason and the Argonauts. One of my fondest memories from my old school days was everyone being marched in silence into the hall, then settling down to watch Jason and the Argonauts. What a film! Heroics, adventure, romance, legendary scary monsters, this film had them all and I was spellbound. Much to the disgust of my family, I still love to watch that old film with its primitive, by today’s standards, special effects. I cannot help it, I adore it. 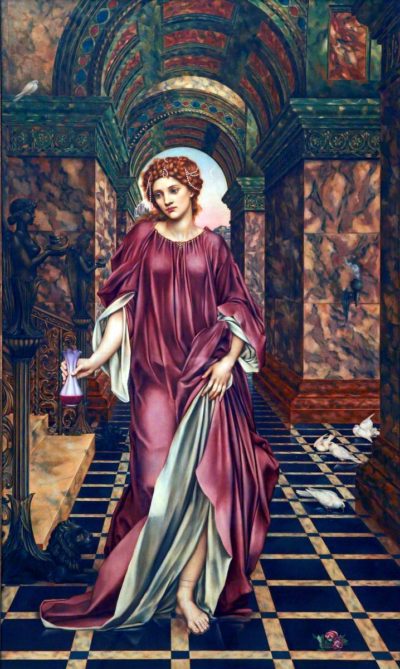 Medea became Jason’s wife after she helped him to steal the golden fleece from her father. As with most females in ancient Greek myth, Medea was painted as a villain, given special powers, she was able to foresee the future. Betrayed by Jason she killed her love rival, her love rival’s father and her own two sons that she had by Jason.

In many of Evelyn De Morgan’s paintings the female is the heroine and despite her calculated murders, Medea is no exception. Evelyn was inspired by William Morris’ poem The Life and Death of Jason, which portrays Medea as a tormented soul rather than a heartless sorceress, as she exhibited this oil painting at the New Gallery in 1890 alongside a stanza from the poem. Evelyn turned the traditional fable from Ovid’s Metamorphoses around, telling the story from Medea’s perspective.

This reminds me of the novel Circe, by Madeline Millier, which I highly recommend. Madeline Miller poetically describes Circe’s island, retelling the story from Circe’s perspective and acknowledging her as the victim of rape.

Sometimes I think it is how a story is edited, which can turn a tortured soul into a villain. Medea initially appeared in the Greek Euripides play, before appearing in Roman poet Ovid’s Metamorphoses. Even Ovid resurrected her, in Metamorphoses VII. In Metamorphoses VII, Medea confronts Jason about his plan to marry Creusa, he denied that Medea had done anything to help him but instead it was the goddess Aphrodite, she responds, “Servare potui; perderan possim regas?” (I was able to save you; do you think I cannot destroy you?). Heartbroken and utterly distraught Medea gifted to Glauce a wedding gown, which burst into flames when she wore it, her father, Creon, tried in vein to remove the gown, but also perished. I do not believe Medea murdered her two sons by Jason, Memeros and Pheres, in cold blood, it was an act of mercy in her mind, as she was afraid they would be tortured in revenge for what she did to Glauce and Creon.

Even with my limited knowledge I believe, Evelyn De Morgan was a master of allegorical painting,  meaning you must read the rich symbolism, contained within to understand the narrative. With this painting I felt each metaphor needed to be carefully unwrapped. Medea paces back and forth furtively looking at the bottle of poison in her right hand, which she means to use on her sons.

The first thing that I noticed about Medea was her sumptuous gown, of Rose Madder. If I may digress for a moment, Evelyn went to a fancy-dress costume party, as a tube of Rose Madder, the night she met William. He quipped “I think I am madder still”, they married just three years later. The colour pallet Evelyn chose has many symbolic meanings; sad feelings, which is understandable given the task ahead of Medea and strength which she needs to endure the horrific task before her. The colour can also signify that the wearer is both regal and dignified, with the layer of white beneath informing the viewer of her purity of spirit, conveying that what she is doing is to save her children from a worse fate.

The next thing I noticed before the opus sectile style flooring, was the symmetry of the composition, our heroine is placed centrally and the Corinthian columns in the background create a halo effect around Medea, letting us known not only is she the principle character, but her motives are pure. She becomes the Madonna within the closed garden, hortus conclusus, further symbolising purity and she will not falter in her task.

I wanted to explore this picture by copying it in graphite and coloured pencils, the intention was to recreate the entire painting. However, the amount of detail and symbolism was prohibitive. I struck a compromise with myself, drawing Medea, carefully studying Evelyn’s technique to construct the luscious fabric carefully observing her approach to Medea’s anatomy. This would free up time for me to focus on some of the smaller details. Although these details are smaller, they are still incredibly significant to formulate a complete narrative. We see four doves on the floor, usually meaning peace or innocence I wonder if they symbolise the souls of those whose lives Medea takes and the one up and to the right represents Jason, ‘the one that got away’, or perhaps her eternal love for the man that betrayed her?

I believed that the small red rose lying as if discarded at Medea’s feet is a symbol of Jason’s deceit, although a rose such as this one can also mean death. I noticed that all the lamps have been extinguished, with a minimal amount of smoke snaking out from each lamp describes the impending death and the length of time passing as Medea wrestles with her dark thoughts. The black marble which can be seen in the opus sectile of the floor often is used to signify grief. You may have noticed that her hairstyle is a nod to Ancient Greece, it is adorned with pearls symbolising tears, although we do not see them in her eyes I feel sure she would shed many tears after the dreadful deed is done.

I do not think that the whole narrative is of purely sorrow as there are some strong allegorical symbols. I have tried to identify the small winged female figures to the left, I believe they are Nike. Nike was a Greek goddess who personified strength and victory, who incidentally was a very close acquaintance of Athena, which made me wonder if Evelyn was actually saying that Medea would need to have strength of character during this horrific act, and if she can be strong she would have victory not just over Jason but over Athena, who she must have blamed for the current set of circumstances. The lion figures below the statuettes of Nike were also commonly used in interior design in Ancient Greece as a sign of strength. While on the subject of lions, Hercules killed the Nemean lion which also had a golden fleece, however this fleece was impenetrable by human weapons, Hercules had to kill it with his bare hands, he was one of Jason’s Argonauts.

The painting is owned by Williamson Art Gallery in Birkenhead since 1927. It is a good-sized oil painting 148cm X 88cm (58” X 34.5” approximately) painted 1889 first exhibited in 1890 at the New Gallery it was accompanied by a quote from William Morris’ poem The Life and Death of Jason, written in 1867.

she saw the happy time fade fast away,

And as she fell from out that happiness,

Again she grew to be the sorceress,

Worker of fearful things, as once she was.”

One of Evelyn’s preparatory pastel on paper sketches is owned by the National Trust’s Wightwick Manor, unusually for a preparatory sketch it is quite detailed and approximately the same size as the finished oil painting.

Currently, the painting is in the exhibition The Enchanted Interior at the Guildhall Art Gallery, London. The exhibition will reopen on 1st August for weekends only and close on 30th August. You must book tickets prior to visiting.