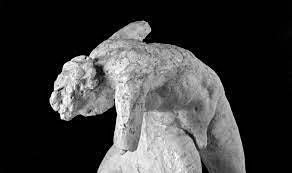 Discover the new exhibition at Watts Gallery – Artists’ Village. It’s Watts… but not as you know him.

George Frederic Watts (1817–1904) is best known as a painter, the ‘portraitist to the Nation’ and the creator of large-scale symbolist pictures. However, from the 1860s until his death in 1904, he began to dedicate substantial amounts of time to working on sculpture.

This exhibition draws inspiration from the fascinating, if fragmentary, sculpture collection at Watts Gallery – Artists’ Village, which was saved from the artist’s London and Surrey studios following his death. Spotlighting the eclectic mix of preparatory models, copies and écorché, A Fragmented Legacy: G F Watts and Sculpture explores the full breadth of Watts’s experimental, obsessive, and at times even destructive sculptural practice.

Stacey received her PhD in History of Art from the University of Glasgow in the spring of 2019 and joined Watts Gallery – Artists’ Village as the first Early Career Research Fellow for the Collections Online project later that year. Her research focussed on the portraits of G F Watts, exploring links between works across the paintings, sculpture works on paper and photography collection.

Last year, she curated the Mary Watts Gallery, Compton Gallery and co-curated Limnerslease, which reopened to the public in December 2021. She is currently Assistant Curator at the gallery and lead curator of A Fragmented Legacy: G F Watts and Sculpture.