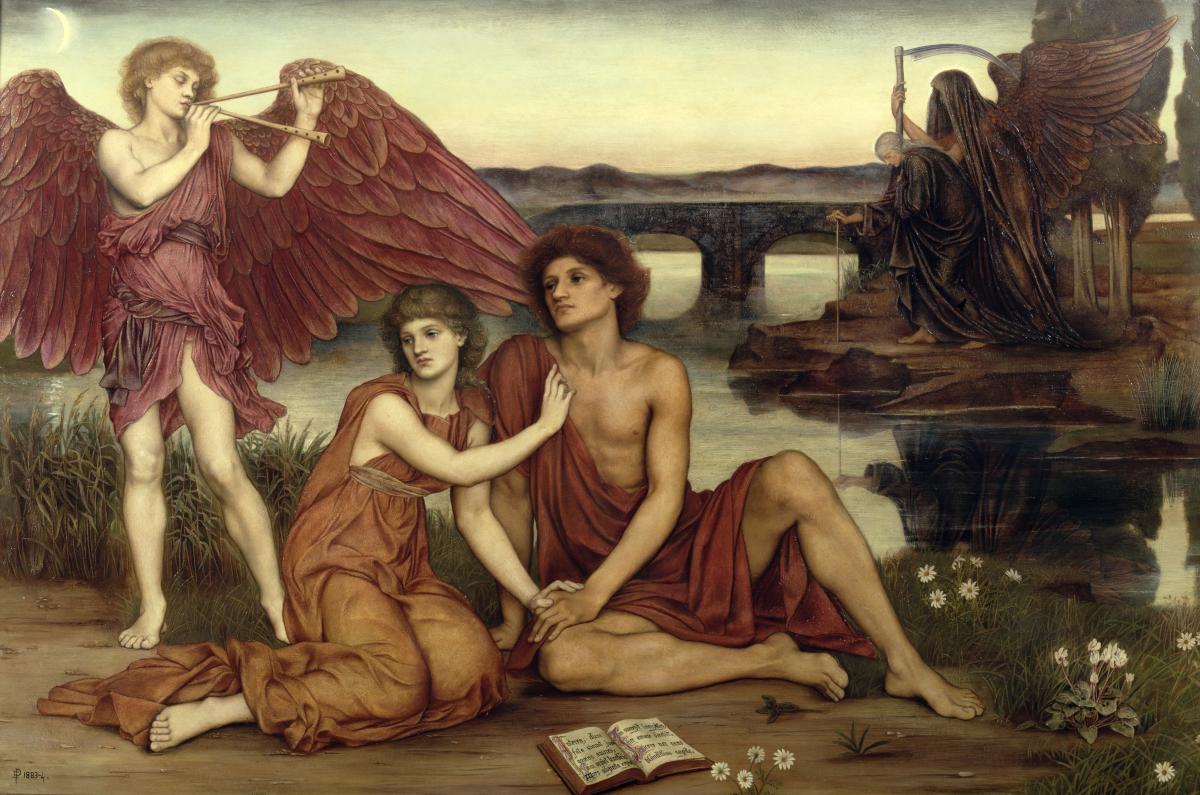 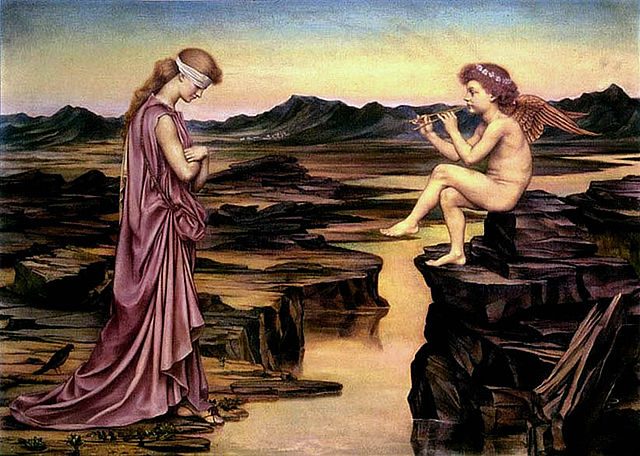 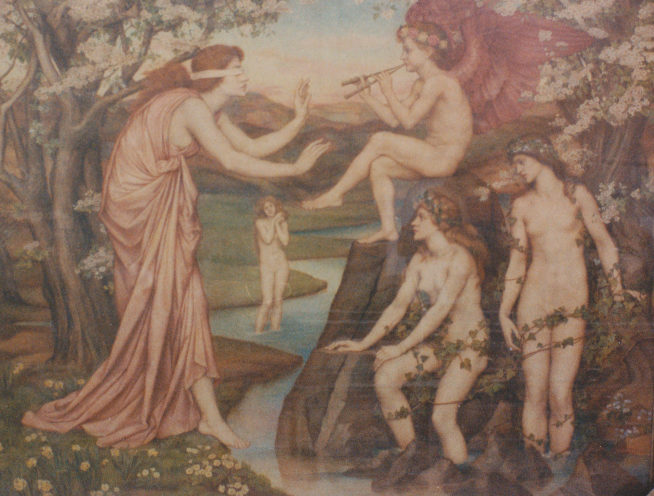 Three pictures made over twenty years reveal much about Evelyn De Morgan’s response to love. According to her official biography, De Morgan first fell in love in 1883 when she met her future husband William. Supposedly he approached her at a fancy dress party where she was trussed up as a tube of Rose Madder paint, quipped he was madder still, and the rest – as they say – was history. Close friend and commentator Emilie Russell Barrington attested to the De Morgans’ marriage being one of true love, stating she ‘pictured them so entirely as one’. Meeting William, her equal partner and her true love obviously had a profound impact on Evelyn and Love’s Passing painted in 1883 reveals something of her grappling with her feelings.

Although the couple in the foreground appear lost in their thoughts of love, listening to the sweet music played to them, we are invited to see the impending doom that awaits one of them when the other dies. Just over their shoulder a grim-reaper like figure leads the elderly woman away, as though a visionary apparition of the passage from one of Tibilus’ Elergies which one of the couple has been reading, leaving their book laying open on the ground before them. Perhaps this was Evelyn De Morgan revealing her anxiety at having fallen for someone 16 years her senior.

The next two pictures in what I believe to be a series of three, deal with the impossibility of love from the perspective of Spiritualism, a late-19th century movement whose followers believed in the eternal nature of the human soul which moved on to a higher power upon the death of the body. De Morgan uses human forms to represent the soul being tricked whilst trapped within. Here, she imagines true love as part of the higher order which will be achieved through living a morally good life on earth.

The similarities between the second two pictures are interesting as they both directly tackle this Spiritualist take on human love leading to one’s ultimate downfall. In the second version however, it appears that the temptations have increased with the nymphs distracting the blindfolded women from the right path. When this more recent version was exhibited by the artist, if was shown with this poem written by Alice Kipling.

The song that is new when the world is old;

Hither, maiden, that goest a maying

For whitehorn silver and King-cup gold.

And the Maiden heard – for the distance

And followed the piping with fleet, fair feet.

Her eyes were holden – by Fate’s decreeing,

For love can see, though lovers are blind;

And down the valley, all, all unseeing.

She followed the piping, a-far on the wind.

Find my place in the pleasant gloaming,

Love on a rock with stream below him,

Waters quench not – for those who know him.

They Love’s Chosen – his sealed bands.

Nymphs a-maying – but none to save her.

(They have suffered – they watch and smile),

Stumbling feet and pool to grave her,

And Love is piping and playing the while.

Very sadly, this picture was lost in a fire in 1991 and so a direct comparison with the other two depictions of love by the artist are impossible. However, it seems the De Morgan reconciled her anxieties for the love of her husband by believing in love of a higher order.