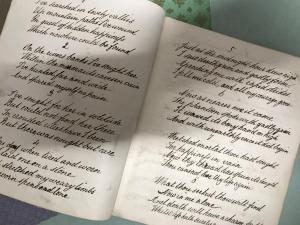 The De Morgan Foundation has, in its archive, a collection of unpublished poems and short stories written by Evelyn De Morgan when she was aged between 13 and 15 years old. It is not known whether she continued to express herself through writing after this age, but no further poems have ever come into the public awareness and, since her estate passed to her brother and sister, who founded the De Morgan Collection, upon her death in 1919, it can be assumed that, if she did continue to write, these works also have made their way into the collection or have been lost or destroyed.

My assumption here is the former, that once Evelyn De Morgan had set her mind on becoming a professional artist, she wished to express herself through her art rather than her poems. I offer my reasons for this assumption in this paper by firstly introducing Evelyn De Morgan, then reviewing her poems and finally examining her paintings as an expression of Spiritualism.

Evelyn De Morgan was born in 1855 in London, the eldest daughter of Spencer Pickering QC and Anna Maria Spencer-Stanhope. The family was a notable one, through a line of politicians and Yorkshire landowners on her father’s side and from nobility on her mother’s, who were direct descendents of the ‘Coke of Norfolk’ who was an Earl of Leicester, a great patron of the arts in the eighteenth century who lived at Holkham Hall in Norfolk.

Her mother was born to the Spencer-Stanhope family of Cannon Hall, Yorkshire, and her brother, Evelyn’s uncle, was the late-Victorian painter John Roddham Spencer-Stanhope. Despite Evelyn’s mother herself growing up in a family of artists, she had conservative views about the place of art in her daughter’s education.

Evelyn was educated at home by tutors, in keeping with an appropriate middle-class upbringing. She was taught with her brothers, meaning that her lessons were in Latin, Greek, French, German and Italian, as well as classical literature, mythology and the sciences, subjects rarely available to girls of her age. Religion also played a huge part in the Pickering children’s education, taught by pastors who visited the house with the same regularity as the tutors. Art was not central to this early education, rather, it provided yet another appropriate method by which Evelyn’s tutors allowed her to examine the world around her. Drawings of plants, fruit and household items in still-life were all that was available to the young artist.

A well educated and extremely well read child, Evelyn De Morgan was well aware of the world around her and of her place in it and was keen to express herself creatively. With art not being an option in her formative years, her self-expression took the form of poetry.

Before an examination of her poetry, it must be considered whether Evelyn’s mother or one of her many tutors played a significant hand in directing her writing, resulting in a misreading of her scripts today as something more profound than they are. In her 1922 biography of her sister, Mrs Stirling comments on note books in the Foundation’s collection which contain stories, rather than poetry, as being nothing more than ‘school-room compositions’. One of these books of Evelyn’s writings features her attempts at writing children’s stories which she expresses are for her five year old brother, making her just 13 years old at the time of writing. The story of fairies living in a diamond palace with the powers of invisibility, ends abruptly with the following note in Evelyn’s hand: “The preceding fairy-tale was begun at an early age but was unfortunately never terminated as the authoress was called to more pressing duties.” showing that writing stories, probably set as a educational task, did not appeal to Evelyn.

A second story in the book features a character, Mr De Braunt, who inherited his family estate when he was just ten years old and moved to a large house in London. This echoes Evelyn’s middle class parents lineage and therefore her preface to the piece is of note. She is less than complementary about the privilege and peerage of Mr De Braunt, spelling out her socialist leanings from an early age, she went on to become an ardent supporter of the Suffrage movement. Again, this novel ends abruptly, with the note “This novel begun at an early age was unfortunately never terminated as the author was at that period so fully occupied with poetical and dramatic compositions, that no time was left for the more humble prose.”

Perhaps the words of a precocious child, as Evelyn clearly was, evidenced in her review of her own magazine ‘The Reader’ which reads ‘The Reader is the best and cheapest periodical of the present day’, Evelyn’s footnotes to her unfinished children’s stories do suggest her deep frustration at the lack of ‘occupation’ or importance in completing stories for instructive rather than expressive purposes.

Her early handwritten poems, by contrast to the stories, are beautiful. The lines are written in elegant script, with few mistakes, by contrast to the rather rushed and blotted stories. However, the message she delivers through these elegantly penned verses is haunting and profound, showing that she had found an artform worthy to express her own agenda.

The tale of Little Gretlein, tells of one young girl’s fateful voyage to find her pet lamb. At breakfast, when she first realises her lamb is missing, Gretlein abandons her meal and heads out into the snow to search for her pet. Starving and cold, she eventually finds the creature dead in a stream. As she realises the snow has obscured her path back home, Greitlin’s grief turns to fear before the seemingly inevitable happens and she dies in the cold.

Whilst calling to mind the moralising tales of the Brothers Grimm and being nursery rhyme-like in pace and tone, the underlying theme of the ever present threat of death is quite jarring in this juvenile poem.

Evelyn was brought up in a politically minded household where social concerns of the day would have been known to her and it perhaps for this reason that death was a topic of such concern to the young Evelyn. The 1853 – 1856 Crimean War, 1851 Burial Act – which decreed that no more bodies could be buried inside the City of London due to grave overcrowding, the 1853 Cholera pandemic which killed 10,700 Londoners in one year and the incredibly high mortality rates would have been common place discussion in Evelyn’s family home. Furthermore, Evelyn’s family were practicing Christians and the belief in the afterlife – particularly the ascension of the soul to a better world beyond this material one – was one she held true and also explored in her poetry.

In her early poems, such as the following untitled short work of 1868 (Evelyn aged 13), it is possible to comprehend Evelyn’s disdain of the modern world and sense of a better world to come in the afterlife.

Of funds the home

Do play their part

The physical passing from the material world into the spiritual one, was also an idea upon which the young Evelyn dwelled. As demonstrated in the previous work, she saw sorceresses, goblins and phantoms as being the spirits of the dark land she lived in, she believed angels would be the spirits to guide the souls of the deceased onwards. This undated and untitled poem rather beautifully deals with this idea.

The place is cold

My love was fair

They lit my soul

Her locks of hair

Were bright as gold

And her lips breathed

And o’er my soul

Come mourn with me

For I am sad

For the is gone

That made me glad

Dream is the night

And dream the day

My heart is broke

My heart is flat

For lies my love