This week, our artistic volunteer Vanessa compares two versions of ‘Moonbeams’ by Evelyn De Morgan by sketching the paintings in glorious technicolour. 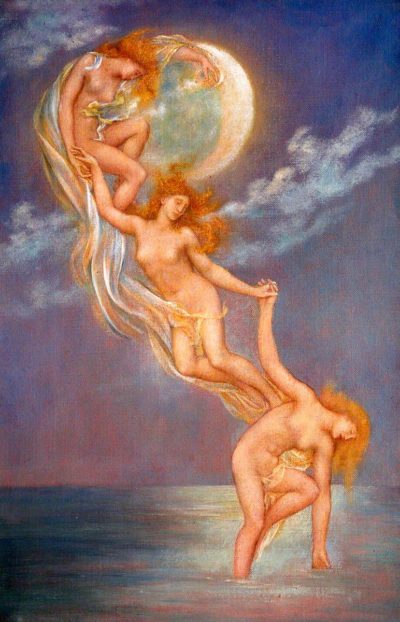 Moonbeams in the collection of the National trust 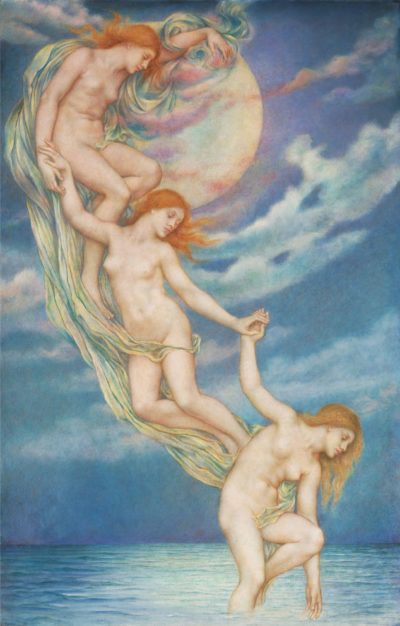 Moonbeams in the De Morgan Collection

I was given a new and exciting endeavour; to compare and contrast two versions of Evelyn De Morgan’s Moonbeams one owned by the De Morgan Foundation and the other the National Trust, Knightshayes Court, Devon. The story and symbolism within this image is rich and deep.

The trinity is traditionally Goddesses who represent the different phases of our lives. The three Goddesses of the Triad were Demeter, wasn’t just the Goddess of the harvest she was also said to represent the cycle of life; Persephone, kidnapped by Hades, becoming the queen of the underworld is symbolism for death and rebirth; and Hecate, the only daughter of the titans Perses and Asteria, she had the power over heaven, earth and sea. It is said she helped guide Demeter in her search for her daughter Persephone, with a flaming torch through the night. Due to Hecate’s dominion over heaven, earth and sea, artists often depicted her in triple form. In the fourth century Maurus Servius Honoratus identified the trinity as Luna from the Latin lucere, to illuminate, because it shines alone at night. Another view is of maiden-mother-crone, to represent the cycle of the moon which invites you to explore your spirituality, and a representation of society’s attitude towards women.

As a feminist Evelyn creates a strong female narrative, with her heroines in charge of their own destiny, dispelling the pseudoscience that a woman’s menstrual cycle is controlled by the moon, which attempts to portray a woman as a being unable to control themselves. Instead of portraying this belief in the usual Luna deity’s maiden, mother and elder, Evelyn’s Goddesses are all young powerful self-assured women. It is this constant narrative that I feel a strong affinity with and excites me about Evelyn’s work, I particularly enjoy her rainbow colour palette in Moonbeams.

I think there is an obvious rainbow in the cloth intertwining and binding the three ethereal bodies, which is reflected throughout the composition. I am not an art historian, but I believe that the rainbow symbolises hope, by connecting the earth and heavenly bodies, painting serves to enlighten and uplift us.

Spirituality through symbolism is an allegory of Evelyn’s artwork. Oberhausen (1996) agrees that in response to the horror she felt about both the Boer (1899-1902) and Great War’s, (1914-1918) Evelyn painted either a stark warning or message of hope. Evelyn’s youngest sibling, Wilhelmina Stirling (1865-1965), wrote a biography about the artist. She writes that Evelyn’s later works, contained dark undertones, quoting a letter from a patron, Mrs Stillman, at how frightened some of Evelyn’s paintings had made her feel. Wilhelmina felt that the Great War and the loneliness the artist felt after her husband William (1839-1917) died, was reflected in her paintings at this phase in her life.

In the NT’s Moonbeams, the full moon painted in blues, greens and burnt sienna, the crescent is clearly visible with a strong icy highlight, but in the larger De Morgan version the full moon and crescent are both described in a cool palette making the crescent less obvious. This cool palette is carried through upon the bodies of the naked female deities, creating the allegory they are not just connected to the moon, but they are Luna. However, the smaller NT version the artist has chosen to depict their skin tone as a strong golden hue, this decision may have been as a symbol of illuminating the night sky. The depiction of a moon in the composition allows Evelyn to utilise this as a source of light that is reflected onto the surface of the sea, in an attempt to create movement, however I do not feel this was successful. The moon reflections and general appearance of the water surface appear too flat and lifeless for what I have observed as a completed De Morgan painting. In what I feel is the more finished version the sea has a realistic colour, surface structure and the reflections from the moon are balanced. 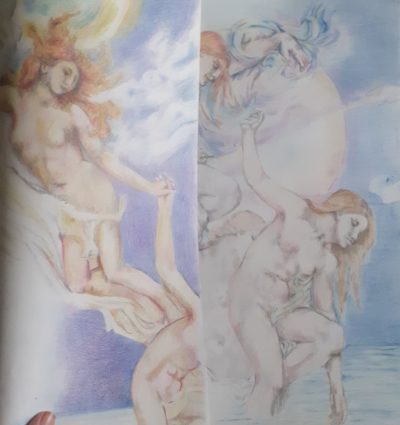 Sketch of the two versions of Moonbeams by Vanessa

For my coloured pencil/graphite drawing, apart from the obvious cooler colour palette another noticeable difference was the hair is relaxed, yet neat and flowing lightly away from their faces. The NT version the hair is wild, very curly with some bright red tones. I am not sure if I have a preference of one version over another, which left me in a bit of a quandary of how to approach my research sketch. I finally decided that I would do both versions, on two separate pages, but then fold one page over so that parts of both versions would be viewable at the same time.

Drawing the NT version first, I felt extremely excited to be able to see Evelyn’s brushstrokes, as it gave me a lot of information about her methodology. I know from looking at her other artworks, she took time to get the anatomical elements correct, on this version I could clearly see she had built up from the bones, then muscle before laying down the skin of her subjects. There were a lot of outlines to the bodies that I had not noticed in her paintings before. From this I was able to make the assumption that Evelyn drew the figure first before adding form, I used this method to draw the characters in graphite before adding colour, but to emulate the actual painting I went back in with more dark lines.

I discovered a pastel sketch, listed as a study for In Memoriam (painted 1890-1919) on the artnet website, but I think it looks exactly like the pose for the model at the top of Moonbeams. The sketch is; Pastel on paper 52.5 X 37.5 cm (20.7 X 14.8 inches) which is only slightly larger than the oil on canvas owned by the NT, which adds weight to my idea that that is also a preparatory sketch, rather than a different version. I placed all three next to each other, to allow for close comparison, as you can see In Memoriam the models legs are in a different position to the sketch, but the legs of the top female in Moonbeams, the legs are in exactly the same position, the right hand and both arms match Moonbeams, as does the body shape. I do not believe it is a sketch for In Memoriam because of how carefully Evelyn drafted her preparatory sketches. I did however find this sketch useful for me to refer to in both of my versions. 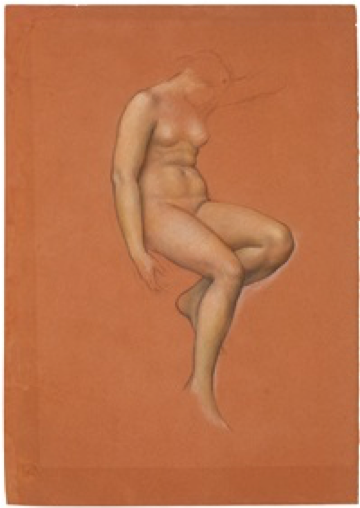 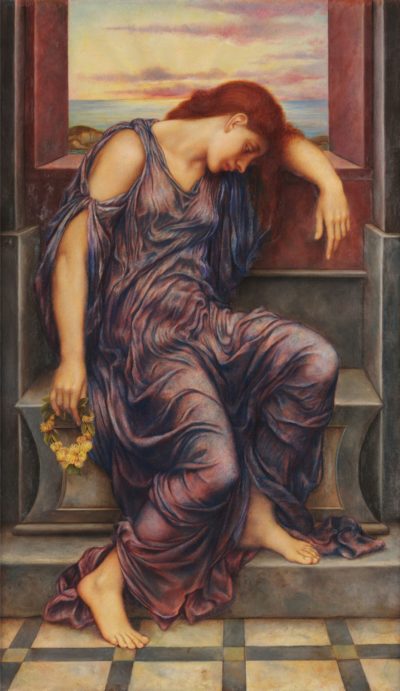 This was an interesting experiment, if not challenging! To explore two versions of the same painting by the same artist, gave me lots of inspiration for my own artworks and how the use of different colour palettes can alter the look, feel and symbolistic nature of a narrative that is being depicted; stark warning or message of hope.