Evelyn De Morgan returned to the subject of magical women throughout her career. Her influences range from classical mythology, to Arthurian Legend, but retain the common theme of women who have been misunderstood as evil or calculating. 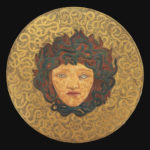 The first supernatural woman she tackled was Medusa, for an unusual gesso roundel she created in 1883. According to the Roman poet, Ovid, Medusa was a beautiful maiden, raped by Poseidon in Athena’s temple. Athena, boiling with rage, turned Medusa’s hair to serpents and made her beautiful face so terrible that the sight of it would turn anyone who saw it to stone. Later, she was tracked down and killed by the hero Perseus, who used her head to make a shield for Athena. In stripping all narrative from her depiction of Medusa, and presenting her head on a roundel which evokes Athena’s shield, Evelyn De Morgan ensures the wronged woman’s plight is highlighted.

Medea was a powerful sorceress with the gift of prophecy, who helped Jason and the Argonauts steal the Golden Fleece from her father in return for marriage. When Jason deserted Medea for the daughter of King Creon of Corinth; in revenge, Medea murdered King Creon, his daughter, and her own two sons by Jason. 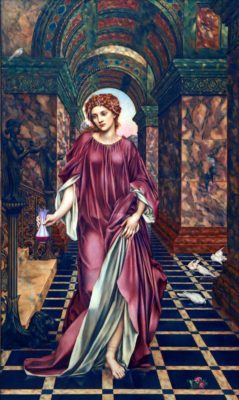 This beautiful and enchanting painting shows Medea wondering the marble halls of Ancient Greece where the story is set, driven mad by her abandonment. The vial of potion she contemplates suggests her plotting the terrible murders. When Evelyn De Morgan first exhibited this painting, when first exhibition at the New Gallery in 1890, she accompanied it with a quote from William Morris’s contemporary poem ‘The Life and Death of Jason’, which read:

Day by day she saw the happy time fade fast away,

And as she fell from out that happiness,

Again she grew to be the sorceress,

Worker of fearful things, as once she was

Morris’s poem in general reimagines Medea as a suffering women, rather than the evil sorceress which was more usual, and by aligning her depiction of Medea with this poem, Evelyn shows her view was also sympathetic towards this character.

Pendant pictures Helen of Troy and Cassandra (both 1898) were created for patron William Imrie, a wealthy shipping magnate, who became the chairman of the White Star Line. Evelyn painted 8 pictures which made their way into his private collection and whilst all are similar in subject and composition, these are the most overtly narrative. Cassandra was blessed with the gift of prophecy, but cursed so that she would never be believed. She predicted the fall of Troy and this paintings shows her rage as it burns behind her, despite her repeated warnings. Again, Evelyn has chosen to depict this magical woman sympathetically to her cause.

Queen Eleanor and Fair Rosamund was painted around a decade after Helen of Troy and Cassandra. The painting is based on the legend of Henry II, who locked his mistress, Rosamund, in a tower at Woodstock. Queen Eleanor, the king’s wife, used a red string to navigate the labyrinth and discover the mistress in the tower and poison her. The Queen’s calculated discovery and murder of Rosamund was, according to legend, evidence of witchcraft as a woman alone surely couldn’t plot such a deviant murder or brew a potion strong enough to kill. Evelyn De Morgan ridicules this sentiment by depicting ‘bad magic’ as floating monkey heads and winged eels which surround the Queen.

Evelyn De Morgan’s final painting of a sorceress is the Love Potion (1905). This painting builds on her previous depictions of magical women, to present to us a traditional witch, complete with potion and cat. She lures us to read this as a devious woman, and so we fail to notice that she is actually a learned scholar, surrounded by books on subjects as wide ranging as colour theory, classics, and even chemistry, which accounts for the fluid which we mistook for potion.

In her handling of magical women, Evelyn De Morgan questions the status quo and reassesses these women as gifted scholars, or figures with whom we should have sympathy rather than direct blame.