“Two of the Rarest Spirits of the Age”, the De Morgan exhibition at the Laing Art Gallery will reopened today, on 10th August. We have been able to extend the show until 26th September, giving you the chance to see this blockbuster exhibition, despite it having to close after just four days due to Coronavirus back in March.

The Laing are taking every measure to keep you safe on your visit, including asking you to pre-book before visiting. You can do this and find out more about planning your visit, and what to expect when you arrive at the museum on Tyne and Wear Museums website.

As designer and painter, rather than just husband and wife, the De Morgans were as Sir Edward Poynter, President of the Royal Academy, notably described them ‘two of the rarest spirits of the age.’ The two artists bridged Arts and Crafts and post-Pre-Raphaelitism through their friendships and collaborations, making them central to the story of art of the late 19th to early 20th-century.

The De Morgans: ‘Two of the rarest spirits of the age’ features 123 works by William and Evelyn in Newcastle for the first time, including more than thirty of Evelyn’s drawings from the De Morgan Collection Archive. Many of the compositional elaborate studies are almost as large as the paintings, but have seldom been seen in public. They are complemented by other drawings, such as charming children’s portraits, and studies for figures and a knight’s armour.

It will also be one of the largest ever exhibitions of the De Morgans’ work, with Our Lady of Peace (1907) by Evelyn De Morgan shown for the first time since undergoing major conservation work in 2018. 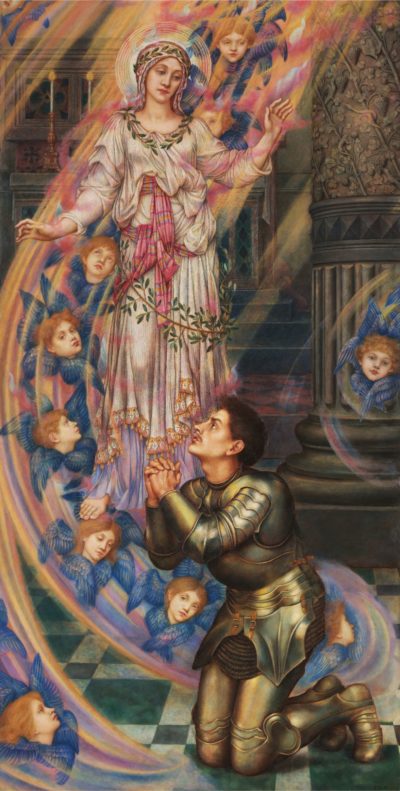 Our Lady of Peace by Evelyn De Morgan

Before their marriage in 1887, both William and Evelyn were already established artists in their own rights. They were devoted to each other and shared a great interest in social reform, pacifism and spiritualism. The De Morgans were also supporters of the Suffrage movement, with Evelyn signing the Declaration in Favour of Women’s Suffrage in 1889. William showed his support by serving as Vice President of the Men’s League for Women’s Suffrage in 1913. For this reason, they truly were two rare spirits.

“Evelyn De Morgan wanted her pictures from the time of the 1914-18 conflict to act as symbols of hope for a peaceful outcome to the war and sold the works, with the proceeds going to the Red Cross. The original exhibition catalogue and Evelyn’s own ration book will be on display, in order that we might understand her very personal response to WWI.”,” says Sarah Richardson, Keeper of Art at the Laing Art Gallery. “It will also showcase some of William’s finest animal designs, from dragons, to macaws, to that sneaky sea monster, swimming up to catch its seahorse companions!”

“The De Morgan Collection has never been exhibited in the North East before and we are delighted to hold the first retrospective of the paintings and ceramics of this remarkable Victorian artistic couple at the Laing Art Gallery. Its Victorian architecture and fabulous collection make it the perfect setting to host this exhibition. It will be the biggest showing of the De Morgans’ artwork anywhere in the world, combining the ceramics, paintings, drawings and archival material to really show off the remarkable qualities of these artists, occupying a unique artistic place on the cusp of Pre-Raphaelitism and Arts and Crafts in Britain” says Sarah Hardy, Curator and Manager of the De Morgan Collection.

We are delighted to have the chance to share this exhibition with you and hope you will be able to visit.