Conserving ‘Our Lady of Peace’ 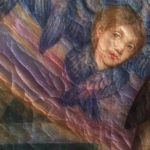 Between October and December 2019, De Morgan supporters generously donated over £3,000 towards the conservation and restoration of Evelyn De Morgan’s painting ‘Our Lady of Pace’ (1907). Conservator Carol Willoughby writes in our blog this month what the early stages have conservation have revealed about this stunning painting. 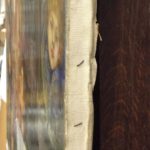 Lady of Peace was painted there. The method of attaching the canvas to its wooden stretcher by means of tapping in thin nails and bending them back – a technique known as sprigging – is typical of Italian manufacture and has been found in several of Evelyn’s canvasses.

Prior to painting the canvas was primed with a thick, smooth layer of white oil paint and, typically for paintings primed in this way, over time pronounced raised cracks in both priming and paint layer have developed. 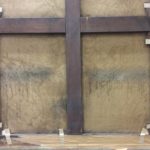 Stains on the canvas reverse show that in the past there has been water seepage along the lower part of the canvas particularly along bottom edge when the painting was stored on its side. This led to flaking and paint loss along the lower edge and raised paint over much of the composition.

A restorer’s label shows that the lifting paint was consolidated and at the same time the paint losses would have been filled and retouched followed by a varnish layer. While the exact date of this treatment is not known it would have been carried out between 1944 and 1972 when Freeman and Sons Ltd had their workshops in Albermarle Street W.1 The varnish layer has become yellowed and masks the intensity of the artist’s colours and its thickness obscures the variation of brushwork which also plays an active part in the artist’s technique. 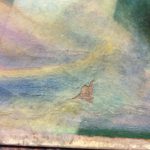 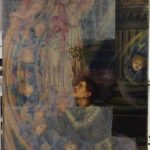 In recent years the paint layer had become so vulnerable that it became necessary to adhere a layer of protective facing paper onto the paint surface to prevent ongoing paint loss.

A recent assessment of the painting’s vulnerable condition led to the conclusion that only a full structural treatment would preserve the painting for the long term. Removal of the thick and yellowed varnish layer which is necessary to achieve a successful treatment of the flaking paint would also reveal the artist’s bright palette of colours and subtly textured paint.

The first step in the treatment has been the removal of the facing paper which has served its purpose in preventing paint loss. As the painting been exposed for many years in London’s polluted atmosphere a layer of black particulate dirt had settled on top of the varnish layer. This was removed using saliva on cotton wool swabs prior to removing the yellowed varnish layer.

Tests showed that it was possible to remove the varnish safely without any risk to the paint layer. As the work progressed the bright colours employed by the artist were revealed along with a 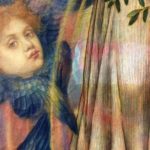 variety of brushwork going from smooth to textured. 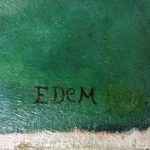 Interestingly, removal of the yellowed varnish revealed that next to the artist’s monogram the date, which had always been difficult to read, to be 1907 but this has been disguised at a later date. Neither the date nor the reason for this painting out is not known but given the insolubility of the green overpaint it has certainly been there for some time.

As the cleaning of the painting has been successfully completed the task of securing the flaking paint and lining the canvas can now begin. 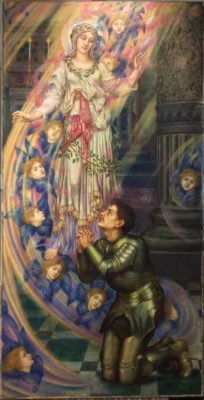