At the opening of the Troy: Myth and Reality, De Morgan Chair Jean McMeakin spotted a group of women taking selfies in front of Evelyn De Morgan’s paintings of Helen and Cassandra, on loan to the exhibition.  Intrigued, she asked them why they chose those two paintings in particular.  The British Museum’s Kayte McSweeney explains how.

In recent years the British Museum has been experimenting with how to bring a variety of perspectives and voices into the interpretation of our new displays and exhibition. One of the ways we have done this is through partnering with community groups to explore how their knowledge, experiences and opinions might compliment, supplement and add to the narratives and stories being developed. Our most recent exhibition, Troy: myth and reality, seemed an obvious opportunity to advocate for the addition of contemporary voices and perspectives with its deeply emotive and timeless themes of migration, conflict, love, trauma, and the plight of women, to name but a few.

The British Museum’s Community Partnerships team have been working with Crisis, a national charity for homeless people, in some capacity for almost 10 years. Crisis provides refuge, training and support for people from all backgrounds, including the provision of ESOL classes for those wanting to learn or improve their English language skills. Upon chatting with them we identified several stories within the Troy narrative that would appeal and formed a collective of people who would help the Museum co-interpret some of the Troy exhibition artworks. All the Crisis community partners had been displaced as a result of conflict and we hoped they bring a real-life contemporary perspective and experience of what it’s like to have to flee or involuntarily leave your home. This we hope will help visitors connect and empathise with the situation that not only faced people in the story of Troy but affects millions of people today.

The women in the group particularity connected to the plight of women in the Troy story and were as such drawn to the pair of Evelyn De Morgan paintings Helen of Troy and Cassandra (both painted 1898). They were intrigued by the symbolism in the paintings and how this helped you unpick the often under told story of the women in the Troy myth. They also reflected heavily on the more luxurious elements of the paintings; the beautiful clothes the women are wearing and their apparent good health, which they stated were not typical of the experience of most women during times of war and something that could be used to get visitors thinking about the realities of actual conflict.  Working together with curatorial and interpretation staff the group wrote a complimentary label for the paintings which they hoped would help visitors connect with and discover how women in contemporary wars often suffer a great deal during wars and often at the hands of men.

Positioned next to the curatorial interpretation the community written label says:

Helen and Cassandra are beautiful and well-dressed, but they represent how women are often the pawns of men and suffer hugely in times of war. Like many women in these situations today, they have no say in their own fate. Taken advantage of by men, they are not part of the conversation. They have no voice and little power. Helen is not given any choices, while Cassandra speaks the truth, but the gods make sure that no-one will believe her.  Look beyond your first impressions of these paintings – the hardship behind the beauty, the suffering behind the mask of beautiful faces

Having been personally moved by the De Morgan paintings one of our Crisis community partners also recorded a 3-minute audio piece which can be listened to in the exhibition, in front of the paintings. In this recording T. S. Bernard talks about her own experiences but also the connection she felt to these mythical women. She says;

“For me personally, I picked out the story of Cassandra and Helen. These were women in a time where they didn’t have a say. Nobody cared about how they felt. Nobody wanted to know how they felt. They were just made to do things. I mean Helen specifically was taken away from her home, and it was against her will …….she had no say in that. But despite the circumstances she found herself in, if you didn’t know the story you wouldn’t see past her beauty. Because she had that up-front beauty, and some of the pictures that I see she is always dressed up nicely, looking ravishing. I don’t think people would really guess that she had gone through the ordeal of things that she went through. So, unless you kind of dig in or speak to the person, you wouldn’t know what people are going through”. 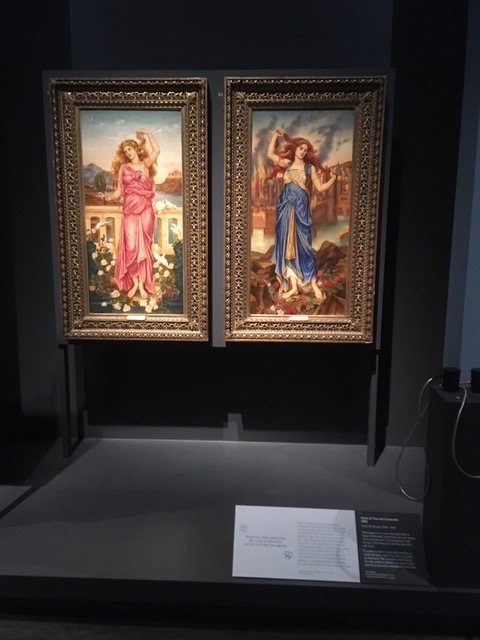