‘Beyond the Brotherhood: Pre-Raphaelite Legacy’ exhibition at Southampton Art Gallery

Who knew that the ambition of seven young men to overthrow the teaching of the Royal Academy of Arts would become a global phenomenon, infiltrating avant-garde arts and culture across generations since? I think they probably did. So self-assured in their mission to undermine art establishment were Rossetti, Millais, and Hunt in their founding of the PRB, that its continued appeal and reinvention was probably something they anticipated. 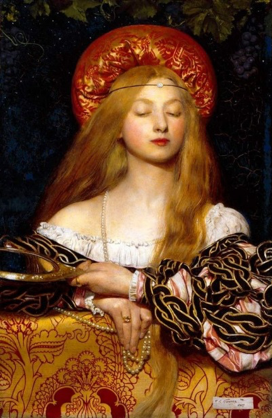 The Pre-Raphaelite Brotherhood was formed in 1848 and had all but disbanded by 1853, with Rossetti, Burne-Jones and their followers, artists such as Spencer-Stanhope, De Morgan, Cowper, and Hughs branching out to form Aesthetic and Symbolist movements. The continued influence of Pre-Raphaelite painting, with its Medieval subject matter, photorealist detail, and bright jewel-like colours is well documented as an inspiration to artists well into the Edwardian period and up to the First World War, but this exhibition goes beyond that.

Anne Anderson, Curator of Beyond the Brotherhood, explains “There have been many Pre-Raphaelite exhibitions but most do not extend beyond the First World War, often seen as a natural end to the movement. This exhibition demonstrates that Pre-Raphaelitism persisted by influencing later artists, providing an outlet for reaction against austerity in the 1960s, and expressing the innate artistic attraction to Romanticism. Today it manifests itself in Fantasy artwork and themes on both the big and small screen.”

The exhibition features some beautiful paintings, such as Frank Cadogan Cowper’s Vanity (1907) and Helm’s Deep by modern artist Alan Lee, who used the PRB as inspiration in the 1950s and 1960s and who has generously supported the exhibition with loans of his deep and mysterious paintings.

Evelyn De Morgan’s Aurora Triumphans (1886?) is included in the exhibition, to demonstrate the influence of Burne-Jones and the aesthetes on the next generation of artists. It is the perfect painting to do so, given that it was bought by Russell-Cotes as a Burne-Jones picture, from an unscrupulous art dealer who had forged an EBJ over Evelyn’s EP, from her maiden name Pickering. The similarities of these two artists are certainly evident in the style of the picture, but thee subject matter – a band of angels trumpeting in the dawn, rejoicing in life again after the darkness of night – demonstrates Evelyn De Morgan’s Spiritualist concerns and sets her quite apart from her Pre-Raphaelite predecessors.

The exhibition, entitled Beyond the Brotherhood: The Pre-Raphaelite Legacy, is supported by the Weston Loan Programme with Art Fund, and will run at Southampton City Art Gallery from 18 October 2019 until 1 February 2020 then at the Russell-Cotes Art Gallery and Museum, Bournemouth, from 21 February until 21 June 2020.