Artist Inspired to Imagine herself as Evelyn

Since the beginning of lockdown, we’ve been encouraging you to take some time out of the madness for a closer, longer look at the De Morgan Collection with our ‘just something beautiful’ campaign. We NEVER imagined that this would be so inspiring for other artists.

“Flora” (above) is a beautiful painting by Evelyn De Morgan, that I first saw on a Facebook post.  This image, by an artist I had never heard of,  sparked my interest to learn more about the painter and her work.  I am an artist who specializes in creating homage paintings and drawings about historical women artists and Evelyn’s painting “Flora” spoke to me.

Upon researching Evelyn De Morgan, I found that her paintings are very original- she created art from a strong female point of view.  Her figures are lovely, pensive and powerful. Through her unique use of color, symbolism and concept, she is able to create paintings and drawings that engage the viewer’s sense of curiosity.

Her protagonists are painted from the inside out, rather than from the outside in. Even though her paintings are very pleasing to the eye, it is not all about beauty, but really about what the subjects represent and many times about what they are thinking and feeling. Evelyn is able to capture your attention, then she is able to pull you in for a closer look–using all her allegorical elements, and ultimately she creates a narrative that engages the imagination as well as the senses. This is the mark of a great visual storyteller, which made her an irresistible subject for a homage painting.

Among the many trademark symbolic elements in Evelyn’s work are the repetitive use of rainbow like beams of light and angelic figures.  I instantly felt that these two elements would be instrumental for me to do a painting about her, because they are a reflection of Evelyn’s vision, which was positive and hopeful. Evelyn’s body of work deals with social and spiritual themes, like war and peace, freedom and captivity, or life and death. 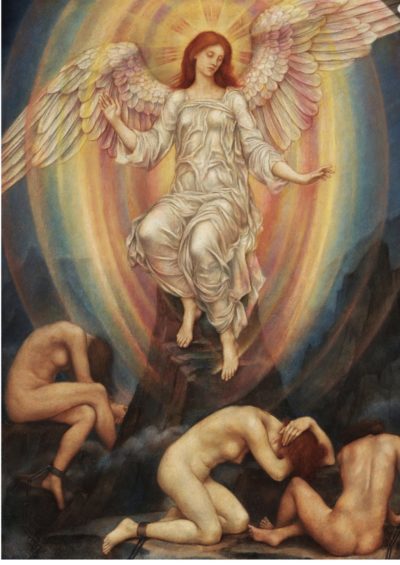 The specific work of art that spoke to me was her painting “The Light Shineth in  Darkness and the Darkness Comprehendeth It Not” (above).  I felt the image of the angelic figure surrounded by colored beams of light , looking down on the three figures below, was a  perfect metaphor to represent Evelyn at work.  The word that comes to mind is illumination. The three crouching figures are symbolic of the world below they are in the shadows and need illumination.  In a strange way, it is very relevant to what is happening in 2020, we as people are looking for a beacon of light to lead us into a peaceful and happy place. 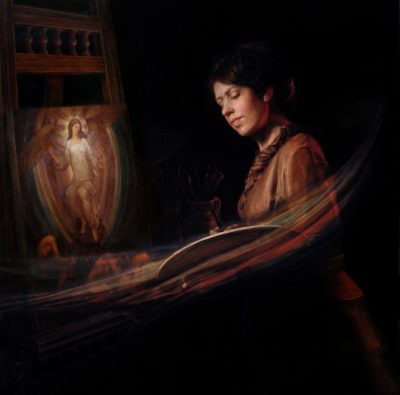 My painting (above) is a composition of light shining within darkness. Evelyn is at work in front of an easel, creating an angelic subject. There are colorful rays of light flowing across my painting that connect Evelyn, her palette and canvas. These three elements are divinely inspired, symbolic of the artist’s imagination.  She and the angel are almost illuminated from within, which engages the viewer to question the source of the light.  Is it the light from Evelyn, from the angel or an outside mysterious force? Evelyn’s gaze is introspective as she looks down on her oval shaped palette, which echoes the oval shape around the angelic figure on her canvas, implying a connection.  If you look carefully, the two ovals, mimic an open book and Evelyn is looking down, almost absorbing and reading into the moment. My intention is to re-enact her, using the connection I feel with her and the image of my self-portrait (I alter my features to resemble Evelyn).  My ultimate goal is to capture her presence and convey a feeling of her life as an artist. 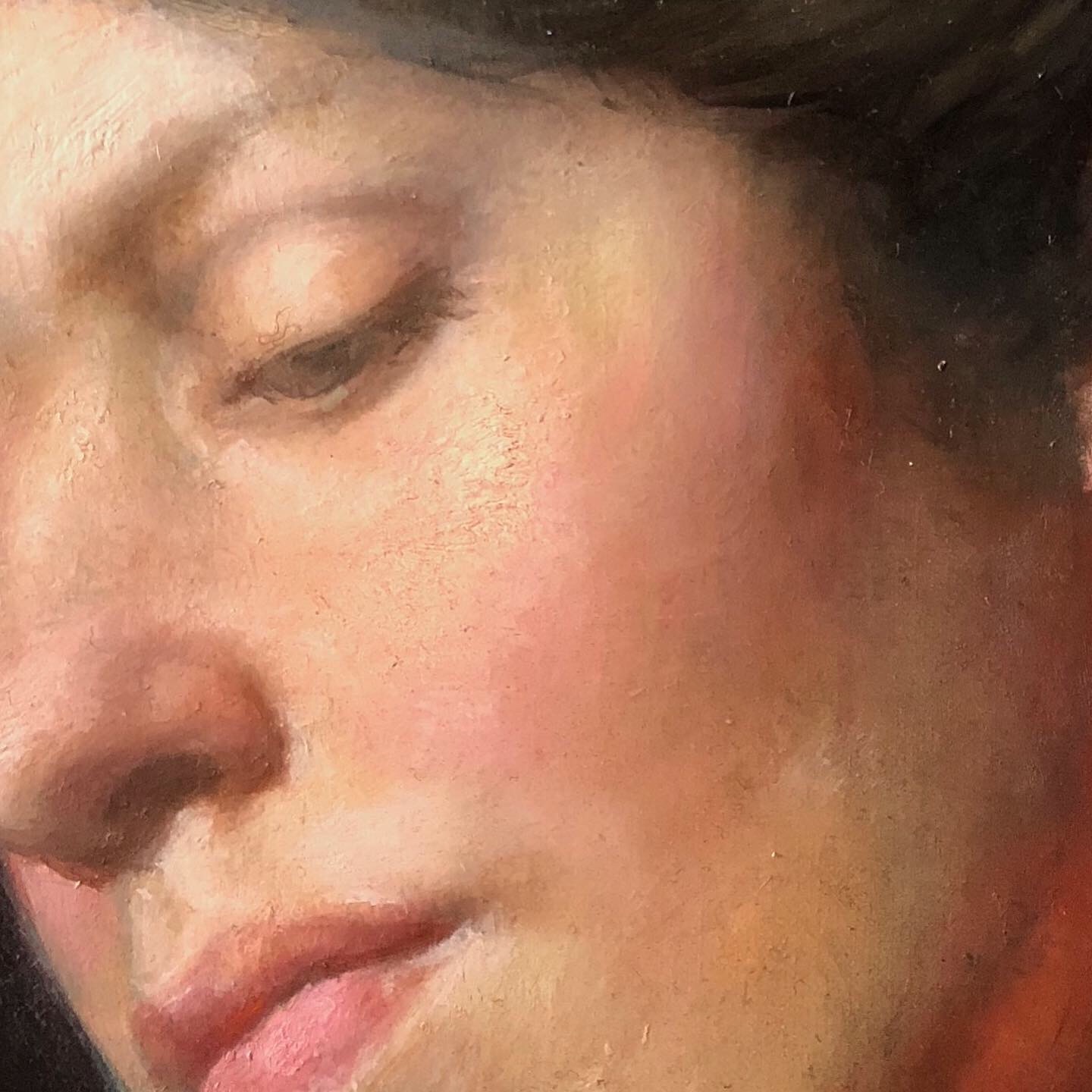 Gabriela Gonzalez Dellosso is a fine artist, known for her homage self-portraits to historical women artists and narrative paintings.  She is a native New Yorker, of Cuban and Ecuadorian heritage. Her artistic roots can be found on both sides of her family.  Her maternal grandmother and great-grandfather were well respected and published poets in South America.  Gabriela’s father, studied painting and drawing in Cuba during the pre-Castro era.  As a child, she remembers trips to the Metropolitan Museum of Art with her father, where they used to study paintings together.

Gabriela’s themes usually involve the human figure and storytelling.  This combination offers viewers a unique cultural statement and interpretation.   Her versatility, yet singular vision has materialized itself in varied subjects such as clowns, brides and homage self-portraits to historical women artists.  Transformative elements involving her self-portraits have been said to have a “Cindy Sherman” twist.

Gabriela received a BFA from the School of Visual Arts in NYC. Her work has been exhibited in galleries and museums worldwide, including two solo exhibitions at The Butler Institute of American Art in 2006 and 2016.  Her work can be found in many permanent museum collections.  Represented by the Harmon-Meek Gallery